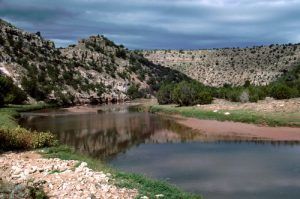 Located along Route 66 and within the Pecos River Canyon is the Village of Pecos, New Mexico.

This area has been settled since at least the 8th century. The nearby Pecos Pueblo, built by the Pecos Indians, is thought to have been established in about 1100 A.D. Built centuries before the Spanish arrived, the multi-story pueblo became a regional power and trade center among the area Indian tribes by 1450 A.D.

Francisco Vasquez de Coronado arrived in the area in September 1540 looking for the fabled Seven Cities of Gold–Cibola. In 1598, Don Juan de Onate, along with settlers, livestock, and 10 Franciscans, arrived in the area and built the Spanish mission church at the Pecos Pueblo in 1619. The area Indians rejected the missionaries during the Pueblo Revolt in 1680, but the Spanish returned in 1692.

The San Miguel del Bado grant was the first major land grant in the area made in November 1794. By the early 1800s, several hundred families were scattered in the Pecos Valley. The Canon de Pecos land grant was awarded to Juan de Dios Pena in 1815, and by 1820 several settlements had sprung up. In 1821, the area became independent of Spain and part of Mexico. This same year, the Santa Fe Trail was blazed by William Becknell. It was probably about this same time that the village of Pecos was established along the Pecos River. 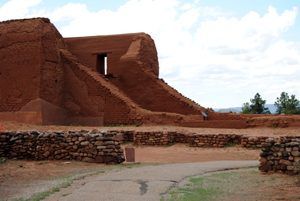 Ruins of the old mission at Pecos Pueblo, New Mexico by Kathy Weiser-Alexander.

In 1838, the few remaining Indians at the decaying Pecos Pueblo and empty mission church moved to Jemez Pueblo some 80 miles to the west. However, before the Pecos Indians left, they entrusted a special painting to St. Anthony’s Parish in Pecos. Called Our Lady of the Angels, it was painted by Juan Correa around 1700 and hanged in the Nuestra Señora de Los Ángeles Mission at the Pecos Pueblo. Beginning in 1839, St. Anthony’s Parish fulfilled its promise to perpetually honor the saint by celebrating a feast day mass in the remains of the mission church and the Pecos Pueblo. The annual feast-day celebration is held on August 2nd (or the following Sunday), drawing people from surrounding communities and continues to this day. Pecos Pueblo descendants from Jemez Pueblo have participated since 1970.

Unfortunately, after the Pecos Indians left the Pecos Pueblo, it was soon reduced to ruins as Santa Fe Trail travelers and locals robbed the buildings of their beams for firewood and building supplies.

During the Mexican-American War, New Mexico was claimed as United States territory by General Stephen Watts Kearny in August 1846. 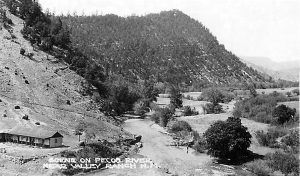 In 1852, Alexander Valle, who was living in or near Pecos, purchased 574 acres of the Canon de Pecos land grant, which had originally been granted to Juan de Dios Pena in 1815. His property was located just north of Pecos village. He also owned the Pigeon Ranch about five miles to the west, where he spent most of his time. In 1865, he sold the Pigeon Ranch and moved to his land in Pecos. He died there in June 1880. His land would later become the site of a popular dude ranch and later a monastery.

In 1880, the Atchison, Topeka & Santa Fe Railroad came to the area, and a station was established at Pecos, which quickly replaced the slower wagon caravans along the Santa Fe Trail. The town’s population at that time was 241.

In 1882, the Terrero Mine opened about 13 miles north of Pecos, beginning with copper mining. Over the years, more ores would be taken from the mine, including gold, silver, lead, and zinc, which was transported down-canyon on an aerial tramway to the “El Molino” site on Alamitos Creek near Pecos for milling and concentration. The mine continued to produce until 1939. At its peak, Tererro had over 3,000 people, and the mine employed about 600 people. A post office and stable for the mine was located at the Valley Ranch in Pecos. During its years of operation, Pecos’ economy thrived from its operation.

In April 1886, Alexander Valle’s land in Pecos was sold at auction to the Valley Ranch Company. 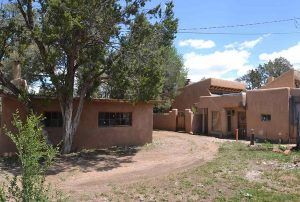 In 1900, some 536 people were living in the Precinct of Pecos, by which time the merchant class had grown enough that specializations were listed, including whiskey salesman, jewelry salesman, grocery salesman, and others. Some of these men may not have had stores per se but were more likely peddling their wares out of the back of wagons around the area while making their homes in Pecos. Other specialties were freight-related occupations, including a teamster, a wagon driver, two express drivers, a simple freighter, and three freighters of railroad ties. This year, the first miner and a miller made their appearance. Twenty-four men reported that they were farmers, and 49 men were farm laborers. Sixty-two men were day laborers. There was also a school in Pecos by 1900, with three local teachers. Few teenagers attended because by ages 10 to 12, many of them already had an occupation. At that time, there were two priests in Pecos. 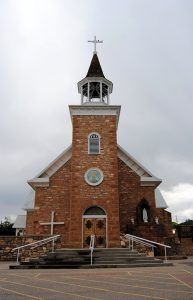 In 1906, the St. Anthony of Padua Catholic Church was built in Pecos. It was constructed of locally quarried stone instead of traditional adobe. Among its adornments is the painting of Nuestra Señora de Los Angeles (Our Lady of the Angels) given to the parish after the  Indians left the Pecos Pueblo in 1838. Still active today, the church is located at 11 St. Anthony’s Loop.

In 1926, Route 66 followed the old Santa Fe Trail and the tracks of the Santa Fe Railroad, passing through a number of Hispano settlements downstream from Pecos. In the 1930s, several roads, bridges, and campgrounds were built in Pecos Canyon by the Civilian Conservation Corps, and a number of Dude ranches were established in the area. These Dude Ranches played a major role in the local economy. The Valley Ranch in Pecos became a popular destination at that time and provided rodeos on Sunday afternoons.

In 1937, Route 66 was realigned further south, bypassing Santa Fe and providing a more direct route between Santa Rosa and Albuquerque. 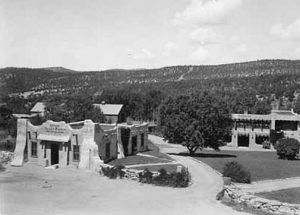 Apache Inn at the Valley Ranch, Pecos, New Mexico, about 1930

In 1947 Trappist monks from Our Lady of the Valley Abbey in Rhode Island bought the Valley Ranch and formally established a monastery in 1948. The Trappists moved to Oregon in 1955, selling the monastery property to Benedictine monks from Wisconsin who operated the monastery until 1985. It then became part of the Olivetan Congregation. Today, Our Lady of Guadalupe Abbey provides individual and group retreats, as well as traveler accommodations.

Today, the population of Pecos is about 1400 people, with many of them commuting to nearby Santa Fe to work.

The area provides a number of attractions for visitors, including the Pecos National Historical Park, Glorieta Pass, Pecos Benedictine Monastery, and the Pecos Wilderness, where hunting, fishing, hiking, and camping can be enjoyed.

Pecos is located about 26 miles southeast of Santa Fe. 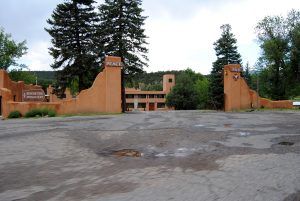