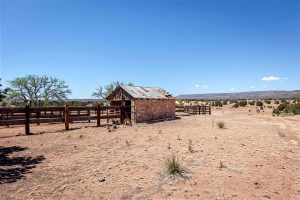 An old building in the Romeroville, New Mexico area.

The old village of Romeroville, New Mexico, was situated on the Santa Fe Trail, the Ozark Trail Highway, and the pre-1937 alignment of Route 66.

By 1851, 16-year-old Trinidad Romero, from a prominent New Mexico family, was working in the family merchandising and freight operation that drove oxen teams on the Santa Fe Trail between St. Louis and Independence, Missouri to Las Vegas and Santa Fe, New Mexico.

At some point, he and his brother, Eugenio, became the beneficiaries of a large land grant, including a 3,300-acre ranch in San Miguel County. Both men, while continuing their business interests, became politicians. In 1878 with the arrival of the Atchison, Topeka, & Santa Fe Railroad, Trinidad Romero, with his brother and their father, started the Romero Mercantile Company in Las Vegas. 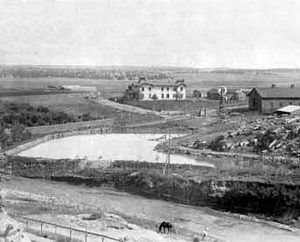 In 1880, Trinidad Romero built a 32-room mansion and ranch at the current site of Romeroville. The mansion, which cost about $100,000 to build, was described as having high ceiling rooms paneled in walnut, a spacious ballroom, and a wide curving stairway. The house was surrounded by a large ranch where both sheep and cattle were raised. Here, Romero entertained many illustrious guests, including President Rutherford B. Hayes and General William Tecumseh Sherman. However, Romero didn’t stay here long, as he sold the property in 1886 and moved to Wagon Mound, New Mexico, where he had another ranch. After changing hands several times, it became a sanitorium In 1905. It burned down in 1932.

In the meantime, a ranching community had grown up around Romero’s mansion that continued to survive. When the Ozark Trail Highway was established in 1915, Romeroville was chosen as the western terminus due to its location on the Santa Fe Trail. This highway lasted until 1926, when it was replaced in the area by Route 66. 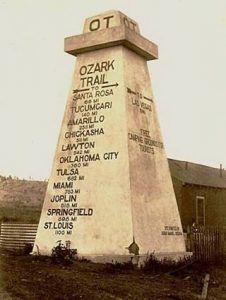 This Ozark Trail Obelisk once stood in Romeroville, New Mexico. However, it is gone today.

Though Romeroville was a key junction on several important highways, there is little here today other than a smattering of houses, old buildings, and a modern gas station at the junction of I-25 and U.S. Highway 84. The town’s post office closed in 1953, at which time, mail was delivered from Las Vegas.

Following I-25 to the southwest, the highway makes its way to Tecolote, just about five miles beyond Romeroville.