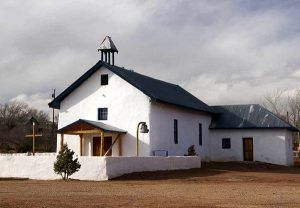 Located on the Santa Fe Trail and the old pre-1937 alignment of Route 66 in New Mexico, Tecolote (Tek-oh-low-tay) is an unincorporated community located next to Tecolote Creek on the west side of I-25 at Exit 335.

The Town of Tecolote Grant was petitioned by Salvador Montoya and five other individuals in 1824. The 48,123-acre grant was approved by Mexican Governor Bartolome Baca, who stated that agricultural decline in the province was “not due to a lack of lands, but of laboring hands.” Salvadore Montoya was the first to establish a small farm here that would later become a supply center on the Santa Fe Trail.

The town’s historic Church, Nuestra Señora de Dolores (Our Lady of Sorrows), is thought to have been built in about 1838. It remains in active use today.

In August 1846, during the Mexican-American War, General Stephen Kearny arrived at Tecolote and, in the plaza, announced that the citizens were no longer under Mexican sovereignty.

After the Mexican-American War, the U.S. Army at Fort Union, New Mexico, established Camp Tecolote in about 1850, south of the town near Tecolote Creek, to use in their campaigns against the Indians. It was used periodically until 1870.

In 1855, Major William Anderson Thornton, a member of a military expedition from St. Louis, Missouri to New Mexico, noted in his diary of August 24th:

“Marched at 8 a.m. with General [John] Garland and passed Las Vegas at 1 p.m. and encamped at 5 p.m. – Tecolote… Country exceedingly pretty as we have entered mountain scenery and commenced crossing a spur of the Rocky Mountains…The villages of Vegas and Tecolote made from unburnt clay and in appearances, resemble unburnt brick kilns in the States. People poor and dirty. Flocks of sheep, goats, and cattle very numerous. Wheat and corn raised by irrigation… The scenery as we advanced towards Tecolote becoming more grand and beautiful. Our camp is located on a beautiful spot overlooking the mud village…”

A steady flow of travelers and merchandise moved along the Santa Fe Trail for years, but, when the Atchison, Topeka and Santa Fe Railroad was built through the area in about 1880, the tracks were routed to the south, bypassing the town and, no doubt, hurting its economy.

In 1886, the Land Department pro­posed to issue a patent to the Town of Tecolote for the Mexican government’s land grant in 1824. Upon hearing this, Salvador Montoya’s heirs protested on the grounds that the patent should be issued in the name of the original grantees since the Town of Tecolote was not a corporate entity. However, the original grant to the town was confirmed, and control was issued to a Board of Trustees. 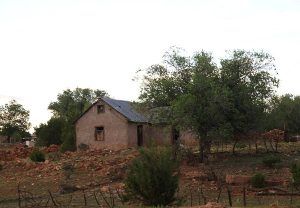 Tecolote’s post office closed in 1923, at which time their mail was delivered from Las Vegas. Three years later, Route 66 came through the town, but it was re-routed in 1937. Today, several concrete bridges supports reveal where old Route 66 once crossed Tecolote Creek on the south end of town. A new bridge now crosses the creek along the frontage road.

The Daughters of the American Revolution placed a granite Santa Fe Trail marker here, but it’s a little hard to find. It is located at the road’s edge between the village entrance and the abandoned Tecolote Creek Bridge.

Tecolote’s population is about 298 people today.

Route 66 and the Santa Fe Trail continue along I-25 to the southwest for six miles before reaching another small village — Bernal, New Mexico.