The mountains rise grandly round about this curious city, the Zion of the new Saints, so grandly that the city itself is hardly visible. The Wahsatch Range, snow-laden and adorned with glacier-sculpted peaks, stretches continuously along the eastern horizon, forming the boundary of the Great Salt Lake Basin; while across the valley of the Jordan southwestward from here, you behold the Oquirrh Range, about as snowy and lofty as the Wahsatch. To the northwest, your eye skims the blue levels of the great lake, out of the midst of which rise island mountains, and beyond, at a distance of fifty miles, is seen the picturesque wall of the lakeside mountains blending with the lake and
the sky.

The glacial developments of these superb ranges are sharply sculptured peaks and crests, with ample wombs between them where the ancient snows of the glacial period were collected and transformed into ice, and ranks of profound shadowy canyons, while moraines commensurate with the lofty fountains extend into the valleys, forming far the grandest series of glacial monuments I have yet seen this side of the Sierra. 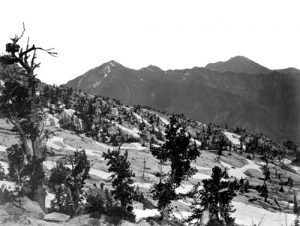 In beginning this letter I meant to describe the city, but in the company of these noble old mountains, it is not easy to bend one’s attention upon anything else. Salt Lake cannot be called a very beautiful town, neither is there anything ugly or repulsive about it. From the slopes of the Wahsatch foothills, or old lake benches, toward Fort Douglas it is seen to occupy the sloping gravelly delta of City Creek, a fine, hearty stream that comes pouring from the snows of the mountains through a majestic glacial canyon; and it is just where this stream comes forth into the light on the edge of the valley of the Jordan that the Mormons have built their new Jerusalem.

At first sight, there is nothing very marked in the external appearance of the town except its leafiness. Most of the houses are veiled with trees, as if set down in the midst of one grand orchard; and seen at a little distance they appear like a field of glacier boulders overgrown with aspens, such as one often meets in the upper valleys of the California Sierra, for only the angular roofs are clearly visible.

Almost all of the houses are built of bluish-gray adobe bricks and are only one or two stories high, forming fine cottage homes that promise simple comfort within.

They are set well back from the street, leaving room for a flower garden, while almost everyone has a thrifty orchard at the sides and around the back. The gardens are laid out with great simplicity, indicating love for flowers by people comparatively poor, rather than deliberate efforts of the rich for showy artistic effects. They are like the pet gardens of children, about as artless and humble, and harmonize with the low dwellings to which they belong. In almost every one you find daisies, and mint, and lilac bushes, and rows of plain English tulips. Lilacs and tulips are the most characteristic flowers, and nowhere have I seen them in greater perfection. As Oakland is pre-eminently a city of roses, so is this Mormon Saints’ Rest a city of lilacs and tulips.

The flowers, at least, are saintly, and they are surely loved. Scarce a home, however obscure, is without them, and the simple, unostentatious manner in which they are planted and gathered in pots and boxes about the windows shows how truly they are prized. 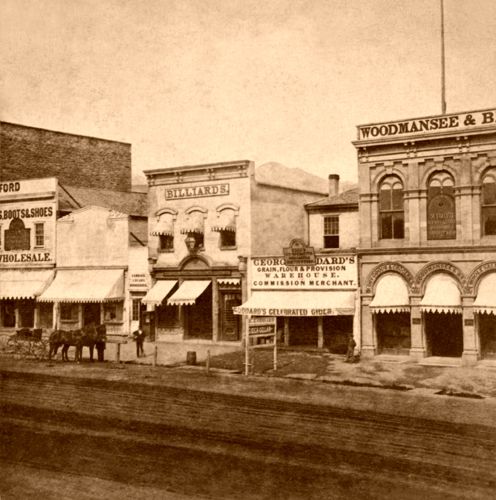 As soon as City Creek approaches its upper limit its waters are drawn off right and left and distributed in brisk rills, one on each side of every street, the regular slopes of the delta upon which the city is built being admirably adapted to this system of street irrigation. These streams are all pure and sparkling in the upper streets, but, as they are used to some extent as sewers, they soon manifest the consequence of contact with civilization, though the speed of their flow prevents their becoming offensive, and little Saints not over particular may be seen drinking from them everywhere.

The streets are remarkably wide and the buildings low, making them appear yet wider than they really are. Trees are planted along the sidewalks–elms, poplars, maples, and a few catalpas and hawthorns; yet they are mostly small and irregular, and nowhere form avenues half so leafy and imposing as one would be led to expect. Even in the business streets, there is but little regularity in the buildings–now a row of plain adobe structures, half store, half dwelling, then a high mercantile block of red brick or sandstone, and again a row of adobe cottages nestled back among apple trees. There is one immense store with its sign up on the roof, in letters big enough to be read miles away, “Z.C.M.I.” (Zion’s Co-operative Mercantile Institution), while many a small, codfish corner grocery bears the legend “Holiness to the Lord, Z.C.M.I.” But little evidence will you find in this Zion, with its fifteen thousand souls, of great wealth, though many a Saint is seeking it as keenly as any Yankee Gentile. But on the other hand, searching throughout the city, you will not find any trace of squalor or extreme poverty.

Most of the women I have chanced to meet, especially those from the country, have a weary, repressed look as if for the sake of their religion they were patiently carrying burdens heavier than they were well able to bear. But, strange as it must seem to Gentiles, the many wives of one man, instead of being repelled from one another by jealousy, appear to be drawn all the closer together as if the real marriage existed between the wives only. Groups of half a dozen or so may frequently be seen on the streets in close conversation, looking as innocent and unspeculative as a lot of heifers, while the masculine Saints pass them by as if they belonged to a distinct species. In the Tabernacle last Sunday, one of the elders of the church, in discoursing upon the good things of life, the possessions of Latter-Day Saints, enumerated fruitful fields, horses, cows, wives, and implements, the wives being placed as above, between the cows and implements, without receiving any superior emphasis. 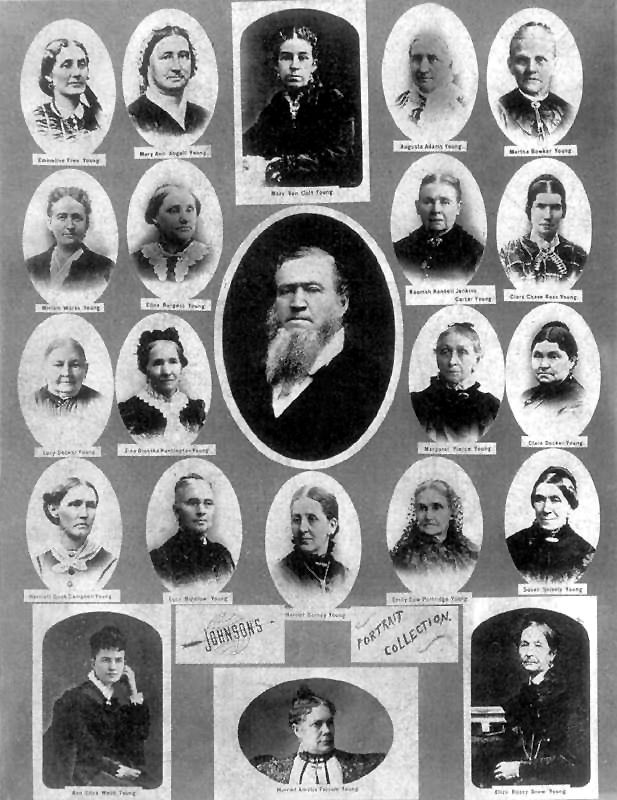 Brigham Young was an ardent supporter of polygamy, marrying 56 wives during his lifetime and fathering 57 children. This photo shows less than half of his wives.

Polygamy, as far as I have observed, exerts a more degrading influence upon husbands that upon wives. The love of the latter finds expression in flowers and children, while the former seem to be rendered incapable of pure love of anything. The spirit of Mormonism is intensely exclusive and un-American. A more withdrawn, compact, sealed-up body of people could hardly be found on the face of the earth than is gathered here, notwithstanding railroads, telegraphs, and the penetrating lights that go sifting through society everywhere in this revolutionary, question-asking century.

Most of the Mormons I have met seem to be in a state of perpetual apology, which can hardly be fully accounted for by Gentile attacks. At any rate it is unspeakably offensive to any free man.

“We Saints,” they are continually saying, “are not as bad as we are called. We don’t murder those who differ with us, but rather treat them with all charity. You may go through our town night or day and no harm shall befall you. Go into our houses and you will be well used. We are as glad as you are that Lee was punished,” etc.

While taking a saunter the other evening we were overtaken by a characteristic Mormon, “an umble man,” who made us a very deferential salute and then walked on with us about half a mile. We discussed whatsoever of Mormon doctrines came to mind with American freedom, which he defended as best he could, speaking in an excited but deprecating tone.

When hard pressed he would say: “I don’t understand these deep things, but the elders do. I’m only an umble tradesman.” In taking leave he thanked us for the pleasure of our querulous conversation, removed his hat, and bowed lowly in a sort of Uriah Heep manner, and then went to his humble home. How many humble wives it contained, we did not learn.

Fine specimens of manhood are by no means wanting, but the number of people one meets here who have some physical defect or who attract one’s attention by some mental peculiarity that manifests itself through the eyes is astonishingly great in so small a city. It would evidently be unfair to attribute these defects to Mormonism, though Mormonism has undoubtedly been the magnet that elected and drew these strange people together from all parts of the world.

But however “the peculiar doctrines” and “peculiar practices” of Mormonism have affected the bodies and the minds of the old Saints, the little Latter-Day boys and girls are as happy and natural as possible, running wild, with plenty of good hearty parental indulgence, playing, fighting, gathering flowers in delightful innocence; and when we consider that most of the parents have been drawn from the thickly settled portion of the Old World, where they have long suffered the repression of hunger and hard toil, the Mormon children, “Utah’s best crop,” seem remarkably bright and promising.

From children one passes naturally into the blooming wilderness, to the pure religion of sunshine and snow, where all the good and the evil of this strange people lifts and vanishes from the mind like mist from the mountains. 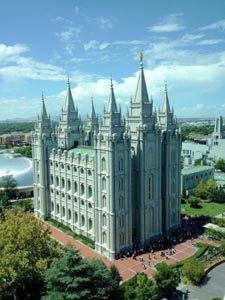 By John Muir, 1918 (published after his death). Compiled and edited by Kathy Weiser/Legends of America, updated November 2019.

About the Author: Written by John Muir, The City of Saints is Chapter 6 of Muir’s 1918 book, Steep Trails, published after his death. Muir worked in a number of vacations during his lifetime, including farmer, inventory, and rancher, but was most happy as a naturalist, explorer, and conservationist. Widely traveled, especially in the American West, he actively wrote about his adventures, nature, and wildlife in his many letters, essays, articles, and books. After years of wanderlust, Muir died of pneumonia in Los Angeles, California in January 1914.