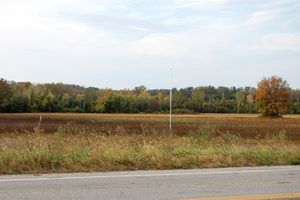 The site of Old Franklin, Missouri

This town, at present increasing more rapidly than any other on the Missouri River contained 120 log houses, 13 shops for the sale of merchandise, four taverns, two smith’s shops, two large steam mills, a court house, a log prison, a post office, and printing press issuing a weekly paper.

Franklin, Missouri was the starting point for the first Santa Fe caravan of pack mules led by Captain William Becknell in 1821.

After the War of 1812, the Boone’s Lick Trail was blazed and emigration into central Missouri was quick. The first settlement to be established in Howard County was Franklin in 1816. Named for Benjamin Franklin, the town was located about 0.5 miles west of the Boonville Bridge on present-day Missouri Highway 87.

Franklin became the county seat of Howard County in 1817 but its first post office would not be established until 1821. In 1819, the Missouri Intelligencer and Boonslick Advertiser became the first newspaper printed west of the Mississippi River. Within four years of having been founded, the town had a public square of two acres, streets that were 87 feet wide, and contained 200-300 buildings, among which were five stores, a tobacco factory, two academies, a market house, several churches, four warehouses, a jail, and a public library.

Most notable was the people that made up its population — lawyers, scholars, doctors, teachers, businessmen, artists, and more. Franklin was an ambitious and formidable rival of St. Louis. When the capital of the new state located, Franklin was a strong candidate for that honor, being one of the three competitors.

Captain William Becknell, known as the “Father of the Santa Fe Trail” lived on a farm a few miles northwest of Franklin near a spring called Boone’s Lick. The spring was discovered by Daniel and Nathan Boone, sons of the famous Daniel Boone. The brothers formed a partnership with James and Jesse Morrison to produce salt and when William Becknell lived there, he managed the salt works for a time.

Another notable resident, named Thomas Hardeman, laid out a flower garden and fruit orchard, which in luxuriance and beauty, rivaled the most noted in the nation. The elaborate nine-acre English garden filled with exotic plants, ornamental shrubs, and fruit that Hardeman had obtained from many parts of the world, made Fruitage Farm one of central Missouri’s major attractions. Henry Shaw visited it long before he established his famed botanical garden in St. Louis. In addition to his agricultural pursuits, Hardeman held part interest in a Franklin general store and operated a ferry between his farm and Arrow Rock on the other side of the river.

William Becknell put a notice in the Missouri Intelligencer stating he was creating a party to go “westward, for the purpose of trading for horses and mules and catching wild animals of every description.” On September 1, 1821, his party crossed the Missouri River at Arrow Rock, followed parts of the Osage Trace, and set out along what would become known in a few years as the Santa Fe Trail. The group returned with substantial profits and Becknell would make more trips to Santa Fe, New Mexico over the next several years.

The goods these traders hauled to Santa Fe, generally consisting of dry goods, cutlery, and light hardware, were obtained from outfits in Franklin which were transported from the east via the Ohio River to St. Louis and sometimes brought to Franklin via the Boone’s Lick Road. More often, however, it was moved up the Missouri River in keelboats, and later in steamboats who docked at Kingsbury Landing in Franklin. The first steamboat up the Missouri River, the Independence, docked at Kingsbury Landing in Franklin in 1819.

Franklin continued to be the county seat of Howard County, until 1823, when the county seat was moved to Fayette since it is about the geographical center of the county. During its greatest period — from 1823 to 1825 — Franklin’s population was estimated at 1500-1700 people.

Living near Becknell, on land owned by the Boone brothers, was none other than Kit Carson, who would also become well known on the trail. Carson moved to Franklin with his family when he was about two-years-old. Unfortunately, his father was killed when he was just eight years old. In desperate poverty, Kit dropped out of school to work on the family farm and engaged in hunting. Despite being penniless, his mother took care of her children alone for four years before remarrying. When Kit was 14, he went to work as an apprentice in Workman’s Saddleshop in Franklin. By this time, the Santa Fe Trail was two years old and many of the customers were trappers and traders from whom Kit would hear stories about the frontier. Kit did not get along with his stepfather and didn’t like the saddle trade. When he was 16, he secretly signed on with a large merchant caravan heading to Santa Fe, arriving at their destination in November 1826.

The next year, Franklin was mostly destroyed by a devastating flood of the Missouri River. The town and Hardeman’s Gardens were built on a sandy foundation and in 1826-1828, during unusual floods, the Missouri River claimed the right-of-way. The abundant floods caused the sandy banks to cave in. House after house fell into the river and in a short time little was left of the town or “gardens”.

In 1828 New Franklin was established on higher ground northeast of the river. Many of Franklin’s residents migrated to the new townsite called New Franklin or to the county seat of Fayette. However, Old Franklin retained the US Land Office until 1831.

By the early 20th Century there was nothing left of Old Franklin but a few foundations, and even those were washed away by a flood in 1993, along with the Santa Fe Trail Marker.

The historic site is north of the Missouri River in Boonville, Missouri. The Santa Fe Trail, which was the same route as the Osage Trace in this area, a route that extended as far west as Fort Osage – followed along the approximate route of Missouri Highway 87 for several miles west of the town of Old Franklin. 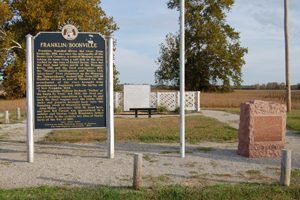