Here was a great revolution of ideas, a mighty sweep of sentiment, which could not be explained away by the stale charge of sectional fanaticism, or by alleging technical irregularities of political procedure. Here was a mighty flood of public opinion, overleaping old barriers and rushing into new channels. The Democratic party did not and could not shut its eyes to the accomplished facts. In my judgment, said Mr. Holman of Indiana, the fate of slavery is sealed. it dies by the rebellious hand of its votaries, untouched by the law. Its fate is determined by the war; by the measures of the war; by the results of the war. These, sir, must determine it, even if the Constitution were amended. He opposed the amendment, he declared, simply because it was unnecessary.

Though few other Democrats were so frank, all their speeches were weighed down by the same consciousness of a losing fight, a hopeless cause. The Democratic leader of the House, and lately defeated Democratic candidate for Vice-President, Mr. Pendleton, opposed the amendment, as he had done at the previous session, by asserting that three-fourths of the States did not possess constitutional power to pass it, this being if the paradox be excused at the same time the weakest and the strongest argument: weakest, because the Constitution in terms contradicted the assertion; strongest, because under the circumstances nothing less than unconstitutionality could justify opposition.

But while the Democrats as a party thus persisted in a false attitude, more progressive members had the courage to take independent and wiser action. Not only did the four Democrats Moses F. Odell and John A. Griswold, of New York; Joseph Baily, of Pennsylvania; and Ezra Wheeler, of Wisconsin who supported the amendment at the first session again record their votes in its favor, but they were now joined by thirteen others of their party associates, namely: Augustus C. Baldwin, of Michigan; Alexander H. Coifroth and Archibald McAllister, of Pennsylvania; James E. English, of Connecticut; John Ganson, Anson Herrick, Homer A. Nelson, William Radford, and John B. Steele, of New York; Wells A. Hutchins, of Ohio; Austin A. King and James S. Rollins, of Missouri; and George H. Yeaman, of Kentucky; and by their help the favorable two-thirds vote was secured.

But special credit for the result must not be accorded to these alone. Even more than of Northern Democrats must be recognized the courage and progressive liberality of members from the border slave States one from Delaware, four from Maryland, three from West Virginia, four from Kentucky, and seven from Missouri, whose speeches and votes aided the consummation of the great act; and, finally, something is due to those Democrats, eight in number, who were absent without pairs, and thus, perhaps not altogether by accident, reduced somewhat the two-thirds vote necessary to the passage of the joint resolution.

Mingled with these influences of a public and moral nature it is not unlikely that others of more selfish interest, operating both for and against the amendment, were not entirely wanting. One, who was a member of the House, writes:

The success of the measure had been considered very doubtful, and depended upon certain negotiations the result of which was not fully assured, and the particulars of which never reached the public.

So also, one of the Presidents secretaries wrote on the 8th of January:

I went to the President this afternoon at the request of Mr. Ashley, on a matter connecting itself with the pending amendment of the Constitution. The Camden and Amboy railroad interest promised Mr. Ashley that if he would help postpone the Raritan railroad bill over this session they would in return make the New jersey Democrats help about the amendment, either by their votes or absence. Charles Sumner being the Senate champion of the Raritan bill, Ashley went to him to ask him to drop it for this session. Sumner, however, showed reluctance to adopt Mr. Ashleys suggestion, saying that he hoped the amendment would pass anyhow, etc. Ashley thought he discerned in Sumner’s manner two reasons: (1) That if the present Senate resolution were not adopted by the House, the Senate would send them another in which they would most likely adopt Sumners own phraseology and thereby gratify his ambition; and (2) that Sumner thinks the defeat of the Camden and Amboy monopoly would establish a principle by legislative enactment which would effectually crush out the last lingering relics of the States rights dogma. Ashley therefore desired the President to send for Sumner, and urge him to be practical and secure the passage of the amendment in the manner suggested by Mr. Ashley. I stated these points to the President, who replied at once: I can do nothing with Mr. Sumner in these matters. While Mr. Sumner is very cordial with me, he is making his history in an issue with me on this very point. He hopes to succeed in beating the President so as to change this Government from its original form and make it a strong centralized power. Then calling Mr. Ashley into the room, the President said to him, I think I understand Mr. Sumner; and I think he would be all the more resolute in his persistence on the points which Mr. Nicolay has mentioned to me if he supposed I were at all watching his course on this matter. 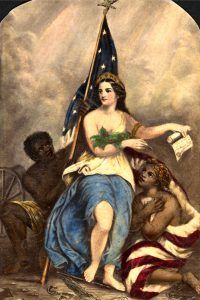 The issue was decided in the afternoon of the 31st of January, 1865. The scene was one of unusual interest. The galleries were filled to overflowing the members watched the proceedings with unconcealed solicitude. Up to noon, said a contemporaneous formal report, the pro-slavery party are said to have been confident of defeating the amendment, and after that time had passed, one of the most earnest advocates of the measure said, This the toss of a copper. (2) There were the usual pleas for postponement and for permission to offer amendments or substitutes, but at four o’clock the House came to a final vote, and the roll call showed, yeas, 119; nays, ~6; not voting, 8. Scattering murmurs of applause had followed the announcement of affirmative votes from several of the Democratic members. This was renewed when by direction of the Speaker the clerk called his name and he voted aye. But when the Speaker finally announced, The constitutional majority of two-thirds having voted in the affirmative, the joint resolution is passed, the announcement so continues the official report printed in the Globe was received by the House and by the spectators with an outburst of enthusiasm. The members on the Republican side of the House instantly sprung to their feet, and, regardless of parliamentary rules, applauded with cheers and clapping of hands. The example was followed by the male spectators in the galleries, which were crowded to excess, who waved their hats and cheered loud and long, while the ladies, hundreds of whom were present, rose in their seats and waved their handkerchiefs, participating in and adding to the general excitement and intense interest of the scene. This lasted for several minutes. In honor of this immortal and sublime event, cried Mr. Ingersoll of Illinois, I move that the House do now adjourn, and against the objection of a Maryland Democrat the motion was carried by a yea and nay vote. A salute of one hundred guns soon made the occasion the subject of comment and congratulation throughout the city. On the following night a considerable procession marched with music to the Executive Mansion to carry popular greetings to the President. In response to their calls, President Lincoln appeared at a window and made a brief speech, of which only an abstract report was preserved, but which is nevertheless important as showing the searching analysis of cause and effect which this question had undergone in his mind, the deep interest he felt, and the far-reaching consequences he attached to the measure and its success.

He supposed [he said] the passage through Congress of the constitutional amendment for the abolishment of slavery throughout the United States was the occasion to which he was indebted for the honor of this call. The occasion was one of congratulation to the country and to the whole world. But there is a task yet before us to go forward and have consummated by the votes of the States that which Congress had so nobly begun yesterday. He had the honor to inform those present that Illinois had to-day already done the work.  Maryland was about half through, but he felt proud that Illinois was a little ahead. He thought this measure was a very fitting if not an indispensable adjunct to the winding up of the great difficulty. He wished the reunion of all the States perfected, and so effected as to remove all causes of disturbance in the future; and to attain this end, it was necessary that the original disturbing cause should, if possible, be rooted out. He thought all would bear him witness that he had never shrunk from doing all that he could to eradicate slavery, by issuing an Emancipation Proclamation. But that proclamation falls far short of what the amendment will be when fully consummated. A question might be raised whether the proclamation was legally valid. It might be urged, that it only aided those that came into our lines, and that it was inoperative as to those who did not give themselves up; or that it would have no effect upon the children of slaves born hereafter ; in fact, it would be urged that it did not meet the evil. But this amendment is a kings cure-all for all the evils. It winds the whole thing up. He would repeat, that it was the fitting if not the indispensable adjunct to the consummation of the great game we are playing. He could not but congratulate all present himself, the country, and the whole worldupon this great moral victory.

Compiled and edited by Kathy Weiser/Legends of America, September, 2016.