Martha Jane “Calamity Jane” Cannary (1852-1903) – Calamity Jane was renowned for her excellent marksmanship, preference for men’s clothing, and bawdy behavior. She was said to have been an Army scout, a bullwhacker, a nurse, a cook, a prostitute, a prospector, a gambler, a heavy drinker, and one of the most foul-mouthed people in the West.

Martha Thomas Carey (1857-1935) ­ – Suffragist and educator Martha was the first female college faculty member in the country to hold the title “dean.” Working at Bryn Mawr College, she also started the first graduate program at any women’s school.

Kate Carmack (1857-1920) – Shaaw Tláa, also known as Kate Carmack, was a Tagish Indian woman and one of the discoverers of the gold that led to the Klondike Gold Rush.

Nellie Cashman (1845-1925) – Nellie Cashman was one of the Old West’s original female entrepreneurs, a prospector, and an “angel of mercy.” Wandering from the frontier mining camps of the West, seeking her fortune, she was soon known for her charity, courage, and determination.

Mary Cassatt (1844-1926) ­- World-renowned artist who introduced Impressionism to America and is famous especially for her paintings and prints depicting mothers and children.

Carrie Chapman Catt (1859-1947) ­- Editor of the National Suffrage Bulletin and a leader in the women’s suffrage movement, she was instrumental in achieving voting rights for women in America’s West and was president of the National American Woman Suffrage Association at the time the 19th Amendment was finally passed.

Mary Colter (1869-1958) – Colter was one of the very few female American architects of her day. She was also the chief architectural designer and interior decorator for the Fred Harvey Company from 1902 to 1948. Her creative free-form buildings at the Grand Canyon in Arizona took direct inspiration from the landscape. They were rustic, utilizing Mission Revival architecture combined with Spanish and Native American influences.

Charlotte Mignon “Lotta” Crabtree (1847-1924) – An American actress and comedian, Crabtree was one of the wealthiest and most popular entertainers of the late 19th century.

Natawista Culbertson (1825?-1895) – Natawista, the daughter of a Blackfoot chief, married fur trader Alexander Culbertson and worked as a diplomat, a hostess, and an interpreter. 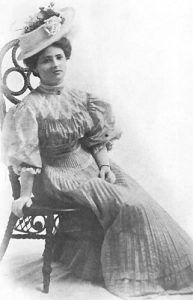 Lottie Deno, aka Carlotta J. Thompkins (her real name), Laura Denbo, Faro Nell, Charlotte Thurmond  (1844-1934) – One of the most famous lady gamblers in the Old West, Lottie earned her reputation on the Mississippi Riverboats before moving on to Texas, where she played poker with the likes of Doc Holliday at Fort Griffin.

Emily Dickinson (1839-1886) ­ Reclusive poet of hundreds of inventive, original poems, she was the most famous woman poet in 19th-century America.

Dorothea Dix (1802-1887) ­ Crusader of rights for the mentally ill in North America and Europe, she founded or improved over thirty hospitals for the mentally ill and influenced government legislation with her research. In 1861, she was appointed the first Superintendent of U.S. Army Nurses.

Isadora Duncan (1878-1927) ­ Pioneer of modern dance in America and Europe, she elevated dance to an art form practiced by serious artists and gained massive popularity for her innovative, expressive style.

Dora DuFran (18??-1934) – The Black Hills’ Leading Madam and a friend to Calamity Jane, DuFran ran several bawdy houses in and around Deadwood, South Dakota, for decades.

Eleanore Dumont (1829?-1879) – Better known as Madame Mustache, Eleanore was one of the first known professional blackjack players in American history and made her name famous for over three decades across the mining camps of the American West. 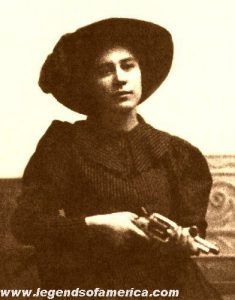 Amelia Earhart (1898-1937) ­ Pioneering female aviator and the first woman to fly solo across the Atlantic Ocean, she achieved many aviation firsts. She set numerous transcontinental records before disappearing in the South Pacific while attempting to fly around the world.

Josephine Sarah “Josie” Marcus Earp, aka Sadie (1861-1944) – Josephine was a professional dancer and actress involved with Johnny Behan in Tombstone, Arizona, when she met Wyatt Earp. The two immediately got involved, and by 1882 she was using the last name of “Earp.” She spent her last years in Los Angeles, California, and died on December 20, 1944.

Fannie Echols – Fannie was the first woman sentenced to hang at Fort Smith, Arkansas. Charged with murder, her sentence was commuted to life in prison.

Lavinia Fisher (1793-1820) – America’s first female serial killer, she was hanged in Charleston, South Carolina, in 1820. Today, her ghost is said to continue to haunt this historic city.

Margaret Fuller (1810-1850) ­ Leading female intellectual and author of the pioneering feminist work Women in the Nineteenth Century in 1845. She edited for Ralph Waldo Emerson and, while writing literary and social criticism in Europe for the New York Tribune, became America’s first female correspondent.