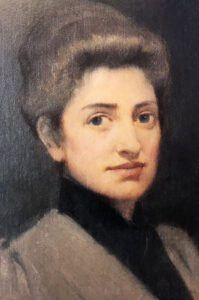 Mary Colter was one of the very few female American architects of her day. She was also the chief architectural designer and interior decorator for the Fred Harvey Company from 1902 to 1948.

Her creative free-form buildings at the Grand Canyon in Arizona took direct inspiration from the landscape, and were rustic, utilizing Mission Revival architecture combined with Spanish and Native American influences. This style became popular throughout the Southwest and eventually served as part of the basis for the artistic aesthetic in developing other national parks.

Mary Elizabeth Jane Colter was born in Pittsburgh, Pennsylvania, on April 4, 1869, to William and Rebecca E. Crozier Colter. Her family moved to Colorado and Texas before settling down in St. Paul, Minnesota when she was eleven. As a child, she wanted to be an artist.  In 1880 St. Paul was home to a large minority population of Sioux Indians. After a friend gave her some drawings of Sioux art, she soon became fascinated with Native American culture. She graduated from high school at the age of 14 in 1883. After her father died in 1886, Colter attended the California School of Design (now the San Francisco Art Institute) until 1891, where she studied art and design. While attending, she apprenticed at a local architectural firm to help fund her studies. 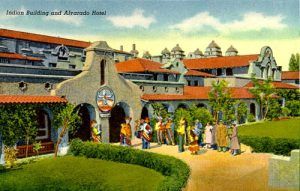 The original Alvarado Hotel in Albuquerque, New Mexico, was torn down in 1970.

She then moved back to St. Paul and began a 15-year teaching career at Mechanic Arts High School. Through informal contacts with the Fred Harvey Company, Colter landed a summer job as an interior designer of the Indian Building and the new Alvarado Hotel in Albuquerque, New Mexico, in 1902. Although the Mission Revival style had been popular in California since the 1890s, the Alvarado Hotel and its adjacent Indian Building were the first of their kind in New Mexico. Utilizing natural materials in forms that mimicked nature, her reputation swiftly grew.

When the Fred Harvey Company noticed that Native American craftspeople were doing a booming trade selling their arts and crafts at railroad stops, they began planning Hopi House, a dedicated marketplace for native American wares on the South Rim. The company then commissioned Colter to design the Hopi House gift shop next to the El Tovar Hotel. Wanting to create a building that would fit the natural setting and reflect the region’s history, she patterned the building after Hopi dwellings in Oraibi, Arizona. The building was built by Hopi craftsmen and constructed using local materials and salvaged items, such as Civil War-era Western Union telegraph poles and rails. For many Grand Canyon visitors, the Hopi House was their first introduction to Hopi and Native American culture. To this day, Hopi House still operates as a Native American gift shop. The Hopi House is a prime example of Colter’s unique site-specific style. 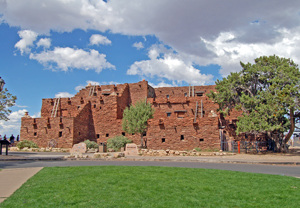 The Hopi House in Grand Canyon, Arizona by the National Park Service.

After completing the Hopi House, Colter returned to her teaching job and then took another position in Seattle, Washington as a department store decorator. In 1910, the Fred Harvey Company offered her a permanent position as architect and interior designer of Harvey facilities. She then moved to Kansas City and worked at the company’s headquarters. For the next 38 years, she served in that role, often working in rugged conditions to complete 21 landmark hotels, commercial lodges, and public spaces for the Fred Harvey Company.

Fred Harvey developed the West along the Atchison, Topeka & Santa Fe Railroad’s main route through the strategic use of restaurant efficiency, clean-cut and pretty young women, high-end tourism, and quality souvenirs. Anthropologists on his staff located the most appealing Native American art and artifacts like pottery, jewelry, and leatherwork. His merchandisers’ designed goods based on those artifacts. In strategic locations, Colter produced commercial architecture with striking decor, floorplans calculated for good user experience and commercial function, and a playful sense of the dramatic. 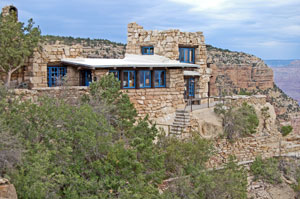 Lookout Studio at the Grand Canyon by the National Park Service.

In 1914, Colter designed and oversaw the construction of Hermit’s Rest and Lookout Studio at the Grand Canyon. Hermit’s Rest was a rest area for tourists traveling on stagecoaches operated by the Fred Harvey Company on their way to what was once Hermit Camp. This simple log-and-stone building was designed to look like a rustic getaway that Louis Boucher, a trail guide and infamous “hermit” who once lived in the area, would have built. With this in mind, Mary Colter ordered the fireplace to be intentionally streaked with soot to add an aged effect.  Lookout Studio, situated just west of Bright Angel Lodge, was built with a native stone exterior and multi-level design that blend in seamlessly with the layers and edge of the Grand Canyon. Its asymmetrical roofline mimics the Canyon’s natural shape to create the illusion that the studio is an extension of the Canyon’s stone walls. Today, Lookout Studio offers multiple viewing platforms and a gift shop.

Phantom Ranch, built in 1922, is a historic oasis nestled at the bottom of the Grand Canyon. These primitive cabins were erected utilizing on-site fieldstone and rough-hewn wood. When Mary Colter produced sketches for a series of cabins, everyone was initially pleased until it was announced that the accommodations would be named Roosevelt’s Chalets. At this, Colter snatched up her blueprints and declared, “Not if you are going to be using my work.” A consummate perfectionist, she had already chosen the name: Phantom Ranch. Phantom Ranch is the only lodging below the canyon rim and can only be reached by mule, on foot, or by rafting the Colorado River.

Colter’s pioneering masterwork may have been the 1923 El Navajo in Gallup, New Mexico, remarkable for its forward-looking fusion of a Native American-inspired design on a severe Art Deco building designed by Santa Fe Railway architect A. E. Harrison. Here, she incorporated Navajo sand paintings and rugs with hand-carved and hand-painted furniture. 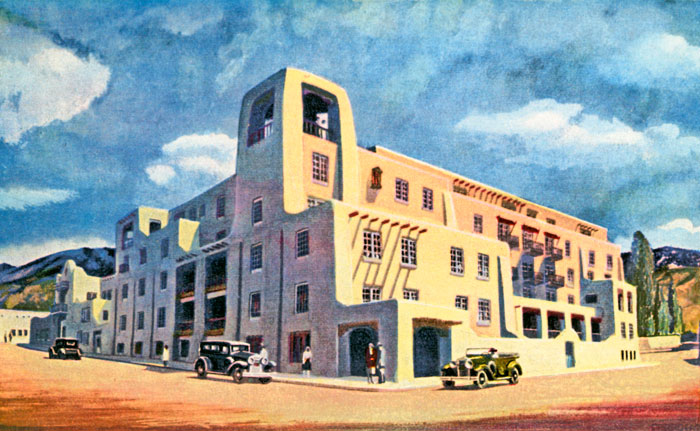 The Santa Fe Railroad bought the La Fonda Hotel on the plaza of Santa Fe, New Mexico, in 1925 and leased it to the Harvey Company to operate. For a major expansion, Colter hired artists and artisans from nearby pueblos to make the furniture. Native American styles were employed in hand-crafted chandeliers, copper and tin lighting fixtures, tiles and textiles, and other ornamentation. La Fonda became the most successful of the Harvey House hotels. Its striking blend of Pueblo people and Spanish artistic influences became very popular across the region.

Mary Colter declared that the 1930 La Posada Hotel was her masterpiece. She was the architect and designer for the entire resort, from the buildings to the acres of gardens, the furniture, china — even the maids’ uniforms. The sprawling, hacienda-style Spanish Colonial Revival building in Winslow, Arizona, has been called “the last great railroad hotel built in America.” The hotel closed in 1957 after a long decline. The closing of La Posada caused Colter to remark, “There is such a thing as living too long.”  It was then used as an office building for the Santa Fe Railroad in the 1960s and then stood empty for years. However, it was purchased in 1996 by Allen Affeldt and his wife Tina Mion, refurbished, and reopened. Situated on Route 66, it is now listed on the National Register of Historic Places. 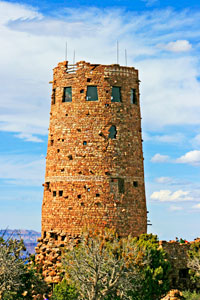 The Desert View Watchtower, built in 1932, is considered by many to be Mary Colter’s Grand Canyon masterpiece. This 70-foot tall tower is located near the east entrance to the Grand Canyon National Park, about 20 miles outside of the Grand Canyon Village. Modeled after ancient Puebloan watchtowers found throughout the Four Corners region, Desert View Watchtower’s concrete foundation and steel structure is covered in intentionally-aged native stone. The Watchtower’s interior is adorned with Native American motifs, including murals and paintings by Hopi artist Frank Kabotie, as well as petroglyphs from the Hopi reservation approximately 100 more miles east.

Bright Angel Lodge was built in 1935 to provide tourists with affordable accommodation on the edge of the Grand Canyon. Like Mary Colter’s other buildings, the design was inspired by local native architecture, including the influence of early pioneer buildings. Designing many cabins surrounding the lodge, the materials mimic the effect and appearance of a diverse settlement built over time. Inside, the floor-to-ceiling fireplace is arranged in the same order as the geologic strata you’ll see as you descend into the Canyon on the Bright Angel Trail.

In 1939, Colter designed the exuberant Harvey House restaurant at the Los Angeles, California Union Station. Under a spectacular arched ceiling, a dazzling floor appears to be random zigzags and geometrics; from another angle, the pattern turns out to be a block-long Navajo blanket made of linoleum tiles. The fabulous dining room and her sleek, Streamline Modern cocktail lounge were padlocked in 1967, except for occasional movie shoots and Los Angeles Conservancy tours. However, it reopened on October 4, 2018. 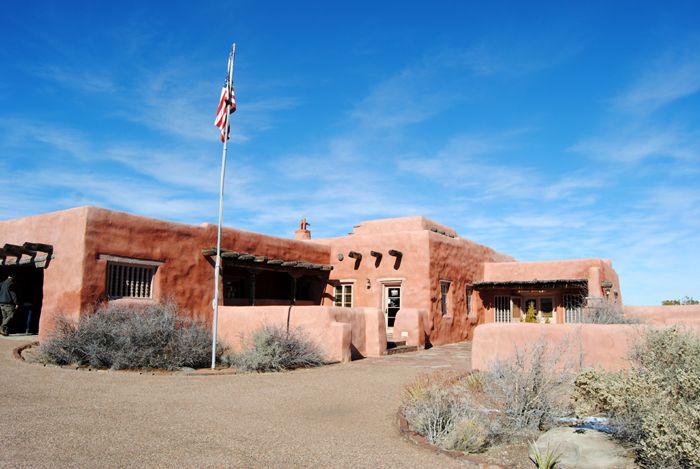 Not long before her retirement, Colter took on the 1947 renovation of the Painted Desert Inn in Arizona’s Petrified Forest National Park. During the Great Depression, a 1922 inn had been overhauled by Civilian Conservation Corps workers to the Mission Revival style, using local materials and Native American motifs. Colter supervised the refreshing, provided a new color scheme, and commissioned Hopi artist Fred Kabotie to put murals in the dining areas. Showing that she was unafraid of the modern when the situation called for it, Colter installed plate glass windows to open up views of the splendid scenery. Closed in 1963, the inn survived a threatened demolition and was placed on the National Register of Historic Places in 1987. It reopened in 2006, restored to the way it looked circa 1949 after Colter’s redesign. It serves as a museum today.

At the age of 79, Colter retired to Santa Fe, New Mexico, in 1948. She donated her collection of Native American pottery and Indian relics to Mesa Verde National Park. She died on January 8, 1958, and was buried in Oakland Cemetery in Saint Paul, Minnesota. 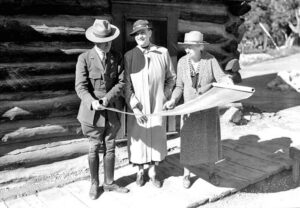 Mary Colter looking at plans at the Grand Canyon in 1935.

Harvey Hotels & Restaurants Along the Rails