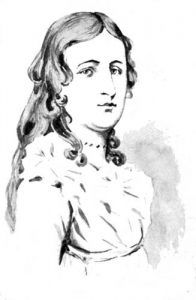 Deborah Sampson Gannett (1760-1827) ­ – She signed up for the 4th Massachusetts Regiment under an assumed male name, becoming the first woman to enlist in the American army. After being wounded 19 months later, she received an honorable medical discharge and a military pension.

Charlotte Perkins Gilman (1860-1935) ­ – Writer and lecturer on women’s role in society, she was a leading feminist theorist and instrument of change.

Emma Goldman (1869-1940) ­ An outspoken feminist, pacifist, and lecturer, Goldman founded Mother Earth newspaper and was noted for her radicalism in aiding the world’s oppressed.

Sarah Moore Grimke (1792-1873) and Angelina Emily Grimke (1805-1879) ­ – Sisters from a wealthy slave-owning family in South Carolina, they were the only white southerners to be leaders in the American Anti-Slavery Society. In an 1838 abolitionist speech before the Massachusetts State Legislature, Angelina became the first American woman to address a legislative body. 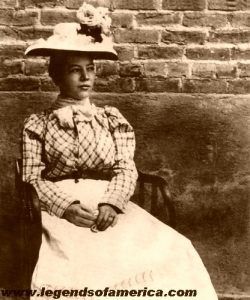 Pearl Hart, aka Pearl Bywater, Pearl Taylor, Mrs. L.P. Keele (1871-19??) – Born as Pearl Taylor of French descent in Lindsay, Ontario, Canada, this petite and attractive young girl would grow up to become one of the only female stagecoach robbers in the American West.

Josephine Hensley, aka Chicago Joe (1846-1899) – The Queen of Helena, Montana’s Red Light District and one of the city’s most prominent businesswomen during the city’s early days.

Sarah Winnemucca Hopkins (1841?-1891) – The first Native American woman known to secure a copyright and publish in the English language. Her book, Life Among the Piutes: Their Wrongs and Claims, is an autobiographical account of her people during their first forty years of contact with explorers and settlers.

Julie Ward Howe (1819-1910) – Born in New York City on May 27, 1819, Julie Ward would grow up to become a prominent abolitionist, social activist, poet, and is most famous for having authored “The Battle Hymn of the Republic.”

Anne Hutchinson (1591-1643) ­ Early champion of religious liberty and free speech, this midwife was put on trial in 1637 for her outspoken views. The Massachusetts General Court found her guilty of sedition and banished her from the Colony. 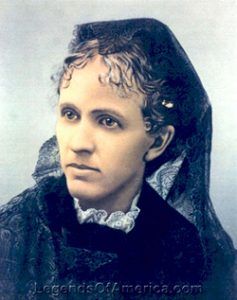 Zerelda “Zee” Mimms James (1845-1900) – Zee was Jesse James’ first cousin, but this did not stop the pair from courting. The couple was engaged for nine years while the James-Younger Gang was in full swing before they married on April 24, 1874.

Mollie Johnson – Referred to as the Queen of the Blondes, Johnson was a leading Madam during Deadwood, South Dakota’s gold boom.

“Mother” Mary Harris Jones (1830-1930) – Labor organizer who championed the cause of social justice and devoted herself to the struggle against the poors hours, pay, and working conditions of the railroad, textile, and mine workers.

Helen Keller (1880-1968) – ­Triumphing over an early childhood illness that left her blind and deaf, she graduated with honors from Radcliffe College. She became a world-famous lecturer, author, and advocate of rights for people with disabilities. 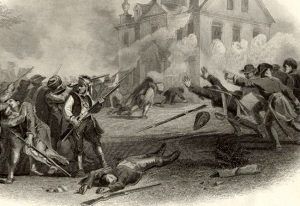 Battle of Germantown, Pennsylvania during the American Revolution, Christian Schussele

Anna Maria Lane (c.1755-1810) – Lane was the first documented female soldier from Virginia to fight with the Continental Army in the American Revolution. She dressed as a man,  accompanied her husband on the battlefield, and was later awarded a pension for courage in the Battle of Germantown, Pennsylvania.

Lillie Langtry, aka Emilie Charlotte Le Breton (1853-1929) – One of the most famous actresses of the 19th century.

Queen Liliuokalani (1838-1917) –Queen Liliuokalani, the last sovereign ruler of Hawaii and the first and only reigning Hawaiian queen, ruled from January 29, 1891, until the overthrow of the Kingdom of Hawaii on January 17, 1893.

Lozen, aka, “Dextrous Horse Thief” (1840-1887) – The sister of Apache Chief Victorio, Lozen was a skilled warrior and shaman. Her brother, Victorio, is quoted as saying, “Lozen is my right hand… strong as a man, braver than most, and cunning in strategy. Lozen is a shield to her people.”

Kitty LeRoy – A gunfighter and gambler, she was one of the Old West’s best women gamblers. In 1876 she ran a saloon in Deadwood, South Dakota. Her many lovers included Sam Bass and Wild Bill Hickok. Her fourth husband grew jealous and killed her in 1878.