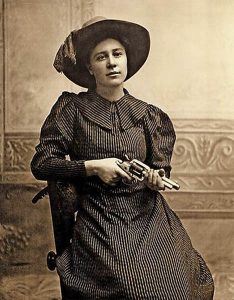 Rose Dunn – This image is disputed, as some debate that it is actually an actress posing for a 1900’s movie, and others indicating it was a prisoner posing for a story on Dunn. According to this article in True West Magazine “Some debate whether this photo was taken to promote the 1915 movie The Passing of the Oklahoma Outlaws, but this photo definitely dates to the 1890s.”

Rose Elizabeth Dunn, also known as the Rose of Cimarron, was best known for her romantic involvement with outlaw George “Bitter Creek” Newcomb in the days of Old West.

She was born on September 5, 1878, in Winfield, Kansas to William H. Dunn and Sarah C. Brenner Dunn. One of ten children, the family was poor, but she received a formal education at a convent in Wichita, Kansas. At some point, the family moved to Ingalls, Oklahoma.

Two of her older brothers had become minor outlaws by the time she was 12. She learned to ride, rope, and shoot from her brothers. Because she could ride a horse better than most men and loved riding her horse across the sandbars of the Cimarron River, she was dubbed “The Rose of Cimarron.” When she was about 14 years old, she met several outlaws through her brothers, including George “Bitter Creek” Newcomb, a former member of the Dalton Gang

In 1893, Newcomb became a member of the Doolin Gang, which terrorized Indian Territory (Oklahoma) for two years as they robbed banks, stagecoaches, and trains in Arkansas, Oklahoma, and Kansas.

On the afternoon of September 1, 1893, while several members of the gang were holed up in George Ransom’s saloon in Ingalls, Oklahoma they were involved in a gun battle with U.S. marshals. After the lawmen surrounded the saloon demanding that the outlaw’s surrender,  Bill Doolin’s response was, “Go to hell.” As the guns began to blast and a hail of bullets flew, the frightened townspeople ran for cover. Dunn, who was staying at Mrs. Pierce’s hotel allegedly ran through the raining bullets in order to deliver a Winchester rifle to her lover.

The battle left nine people killed or wounded, including one deputy who died immediately and another two, who died of their wounds the next day. Three of the outlaws, including Rose’s boyfriend, were wounded and “Arkansas Tom” Jones was captured. By May 1895, Newcomb had a $5,000 reward on his head and when he and Charlie Pierce, stopped to see Rose, her outlaw brothers turned them in for the reward and he was shot and killed by lawmen. 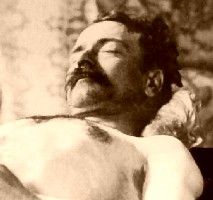 After Newcomb’s, Rose Dunn was often accused of having set him up, revealing to her brothers where the outlaws were hiding. She denied this, and her brothers later backed her up, stating that she had no knowledge of their intentions, nor did she reveal the hideout to them.

Afterward, she no longer cohorted with outlaws and became the wife of Oklahoma politician Charles Noble in 1897. A few years later, the couple and two of her brothers moved to New Mexico to begin a new life away from any mention of the outlaws. After her first husband Charles died in 1930, she married Richard Fleming in 1946. The couple then moved to Washington. After living the rest of her life as a respected citizen, she died on June 11, 1955, at the age of 76 in Salkum, Washington.