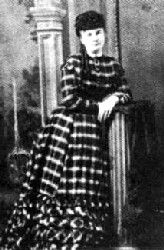 Celia Ann “Mattie” Blaylock was involved with Wyatt Earp after the death of his first wife, and is often termed as Wyatt’s “common law” wife.

Born in Wisconsin in 1850, Mattie was raised in Fairfax, Iowa until she ran away from home at the age of 16. She then made her way to Kansas where she first worked as a prostitute in Scott City before moving on to Dodge City. There, she met Wyatt Earp around 1873 and soon became his romantic companion. She continued to work as a prostitute during their early years together. Living and working together, Mattie utilized the last name of “Earp” and by the time they moved on to Tombstone, Arizona in 1879, she would have been considered his “common-law” wife.

Mattie allegedly suffered from severe headaches and became addicted to laudanum, which was commonly used as a pain killer at the time. As her addiction became worse, Wyatt’s eyes began to stray in Tombstone and he started up an affair with Josephine Marcus. After Morgan Earp was killed in March 1882, Virgil, along with the Earp women, escorted his body home to Colton, California. Wyatt sent Mattie along with the others while he and Warren stayed to begin the Earp Vendetta Ride.

Mattie waited for Wyatt’s telegraph that she should return to Tombstone, but it never arrived. In the meantime, Wyatt was getting more and more involved with Josephine, who he would later marry. Finally, Mattie left California and moved to Globe, Arizona, where she returned to prostitution. On July 3, 1888, she took a lethal dose of laudanum in Pinal City, Arizona. Her death was ruled a suicide. She was laid to rest in the cemetery about one mile from the old townsite.