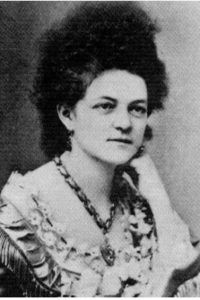 Eleanore Dumont, better known as Madame Mustache, was one of the first known professional blackjack players in American history and, for over three decades, made her name famous across the mining camps of the American West.

She was thought to have been born in New Orleans, Louisiana in about 1829 but, for whatever reasons, made her way west during the California Gold Rush. Known as Simone Jules, a petite and pretty French woman in her early twenties, she arrived in San Francisco in about 1849, where she soon established herself as a gambler, favoring the game of Vingt-et-un, which means “21,” the precursor of American Blackjack.

Working at the Bella Union, she was known for her elegant dignity, aloof manner, and ability to handle stress on the card table. However, when she was suspected of card sharping, she was let go, but, not before she had obviously earned quite a bit of money. 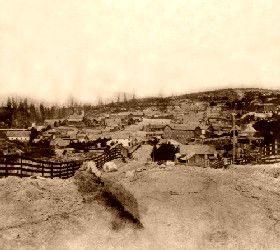 She next made an appearance in Nevada City, California. Stepping off the stage in 1854, her bejeweled and stylish appearance created quite a stir among the rough residents of the mining camp. Two young miners quickly volunteered to carry her bags into the Fepp’s Hotel, where she registered as Eleanore Dumont.

For the next few days, she wandered up and down Broad Street, the main street of Nevada City, peering into shop windows that had gone out of business. Soon, she had the whole town talking and wondering why the young woman seemed to have nothing better to do walk about town in her best finery.

Soon, though, the mystery would be solved after she handed a printing order to Editor Wait of the Nevada Journal for a handbill which advertised the opening of the “best gambling emporium in northern California.”  Citizens all over town soon received invitations to the grand opening of the “Vingt-et-un” on Broad Street to enjoy a game with Madame Dumont as well as free champagne for all. A finely furnished and carpeted gambling den with gas chandeliers, it would only allow the entrance of well-behaved and well-groomed men, and cursing was discouraged in her presence.

Her gambling parlor opened with a bang as the men swarmed in. Having cleaned up and put on their best clothes for the occasion, they found Miss Eleanore witty, vivacious and charming as she moved around the room talking to them before beginning her game. Rolling her own cigarettes and drinking champagne, she deftly kept them at arm’s length, telling them all tactfully that she was a lady.

Though few at the time knew how to play the game of “21,” as Faro was the favored gambling endeavor, the novelty of having a pretty female dealer quickly attracted a number of players. Dealing like the seasoned pro that she was, the miners more often lost than they won; however, they seldom complained, thinking it a privilege to be in her presence. When she won, she would sweetly express regret and treat the losers to free champagne. When she lost, she seemed pleased for their good fortune.

During this time, Dumont was not known to have any lovers, kept her personal life very private, and women were prohibited from coming into her establishment or loitering outside.

She soon built up enough capital that she wanted to open a larger establishment. She took on a partner named David Tobin, a professional gambler from New York, and the two opened Dumont’s Palace, that also provided games of Faro and Chuck-a-luck. Hiring more dealers and a small band of violinist to entertain the gamblers, the Palace was also successful, keeping a dozen games going day and night.

But, for Nevada City, like so many other mining camps, the gold would finally play out, and Eleanore Dumont then made her way to Columbia, California in 1857, where she set up her table in a hotel. 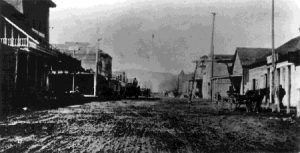 A couple of years later, she decided to get out of the business and though she knew little of animals, she bought a ranch in Carson City, Nevada. Lonely and out of her element, that’s when she met Jack McKnight, who swept her off her feet. A handsome, well-dressed man, who was a smooth-talker who claimed to be a cattle buyer, Eleanore was instantly infatuated. However, McKnight was actually a conman who made his living swindling others. Less than a month later, he disappeared with all her money, had sold her ranch, and left her with all the outstanding debts.

Never a timid woman, legend has it that she went after the cad, tracked him down and opened up on him with a double blast from a shotgun. Suspected of the crime, she was never charged and denied responsibility. Years, later; however, she allegedly confessed to killing him.

Alone and destitute, she was forced to return to the mining camps and take up gambling again. In 1861, she went to Pioche, Nevada, where she set up her table. Here, she was said to have used her powers of charm to subdue a noisy, quarreling crowd of miners. As several drunken miners began to flourish pistols, looking for a fight, Madame Dumont quietly approached the noisiest of them, and laughingly reproved from their ungallant conduct, succeeding in quieting the entire crowd.

As the mines played out in Pioche, she would move again and over the next two decades, she would follow the gold from one camp to the next, drifting through places such as  Bannack, Fort Benton and Helena,  Montana; Salmon and Silver City, Idaho; Corinne, Utah; Eureka and Virginia City, Nevada; Deadwood, South Dakota; Tombstone, Arizona; and finally ending up in Bodie, California.

In the early years, Eleanore brandished her chastity in the womanless gold-rush camps and enticed men by her virtue and manners to come and play with her. However, over the years, as she aged, her body filled out to plumpness and the fine unflattering growth of hair on her upper lip darkened. With the waning of her beauty, she was no longer able to coax the roughness out of the miners. No longer did they refrain from cursing, remove their hats, and tell only clean jokes. Eleanore too would eventually take on many of these hardened characteristics. Whereas she first would drink only wine or champagne in moderation, she turned to whiskey. She too took on rougher language and easily tolerated ribald talk.

Though she gradually transformed from a polite beauty to a mining camp character, there was still magic in her name, and she continued to draw customers. Through the years; however, her establishments became more second rate and she ceased to be a novelty as more and more as women began to fill the mining camps.

In many cases rival gamblers resented her crowds and were quick to defame her character, alleging that she was a card sharp. It is unclear as to whether she ever turned to sharping, but, she obviously benefited from the dealer’s edge in blackjack. She needn’t have had to have cheated in order to win. Overall, she was a popular dealer because people believed she played an honest game and had a reputation for always paying her debts and paying out any winners fairly. In some cases, she was even known to loan a few dollars to the miners to gamble with.

Later, when she also began to act as a true “Madame,” and added prostitution to her earning capacity, she would regain some of her old charm and poise in the dual role of bordello Madame and gambler.