There is perhaps no more honorable title than that of “American soldier.” Inscribed on the Tomb of the Unknowns at Arlington National Cemetery are the words, “Here Rests in Honored Glory, An American Soldier, Known But to God.” Thousands of known and unknown American soldiers rest in national and private cemeteries all over the world, as they do in Shiloh National Cemetery. Near the riverbank lies six Wisconsin color-bearers, all killed in action as they carried their regimental standard into the heat of battle. Just to their west lies Captain Edward Saxe of the 16th Wisconsin, the first Federal officer killed in the battle. Near him lies the teenage drummer boy John D. Holmes of the 15th Iowa. Nearby, two Confederates lie amid so many Union soldiers, their pointed tombstones in stark contrast to the rounded stones of United States soldiers. Across the cemetery lies J.D. Putnam of the 14th Wisconsin, whose 1862 burial inscription on the foot of a tree, cut by his friends in the heat of battle, was still legible in 1901. Near him lies George Ross, a Revolutionary War soldier. In the newest sections of the cemetery, many more recent American soldiers lie in honored glory. One memorial honors a Persian Gulf veteran killed in service. Most sadly, interspersed between all these American soldiers are countless gravestones with only a number identifying them. They too had lives, mothers, perhaps wives, sons, and daughters, fears, hopes, and dreams. All these soldiers, known and unknown, served their country and gave the ultimate sacrifice. They deserve the honor and tribute of Americans, and the title “An American Soldier.” 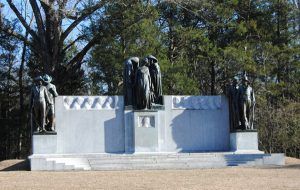 A large Confederate monument commemorates the southern soldiers who fought and died at the Battle of Shiloh. 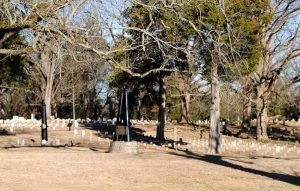 As a result, the Confederates who died at Shiloh were not disinterred from their battlefield graves. They remain on the field in several large mass graves and many smaller individual plots. As many as eleven or twelve mass graves exist, but the park commission that created the battlefield could only locate five. Those five are now marked, the largest of these being the mass grave at Tour Stop # 5.

National cemeteries and soldier plots are special places, and Shiloh is no different. Buried with these American soldiers is the honor, courage, and sacrifice of an entire American generation. Indeed, these soldiers gave the ultimate sacrifice for what they believed in. Can we of today’s generation learn from these soldiers and meet our own challenges and problems with the same dedication they possessed? Despite different means to wage war, different enemies to face, and different objectives to win, we are still fighting for the same causes they were: life, liberty, and the pursuit of happiness. Perhaps President Abraham Lincoln said it best when he declared “that these dead shall not have died in vain,” but that this nation “shall not perish from the earth.” It is our duty to take the standard and make sure Lincoln’s vision is never lost. 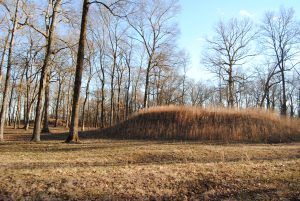 About 800 years ago, a town occupied the high Tennessee River bluff at the eastern edge of the Shiloh plateau. Between two steep ravines, a wooden palisade enclosed seven earthen mounds and dozens of houses. Six mounds, rectangular in shape with flat tops, probably served as platforms for the town’s important buildings. These structures may have included a council house, religious buildings, and residences of the town’s leaders. The southernmost mound is an oval, round-topped mound in which the town’s leaders or other important people were buried.

This town was the center of a society that occupied a twenty-mile-long stretch of the Tennessee River Valley. Around  1200 or 1300 A.D., inhabitants moved out of this part of the Tennessee Valley, perhaps to upriver locations now submerged under Pickwick Lake.

Since the Shiloh society disintegrated several hundred years before there were written records to tell us who they were, it is not clear whether or how the Shiloh residents were related to later societies like the Choctaw, Chickasaw, or Creek Indian tribes.

Archaeologists refer to the society centered at Shiloh as a “chiefdom.” The chief would have been the most important political leader as well as religious figure. Probably a council, composed of elders and respected members of the community, shared power with the chief. Close relatives of the chief would have been treated like nobility; some were probably buried in “Mound C.”

The Residents of the Shiloh site were farmers. Corn was their most important food. They also grew squash and sunflowers, as well as less familiar crops such as goosefoot, marsh elder, and maygrass. In addition to their cultivated crops, they also ate a wide variety of wild plants and animals. The most important wild plant foods were hickory nuts and acorns. Most of their meat came from deer, fish, turkey, and small animals such as raccoon, rabbit, and squirrel. 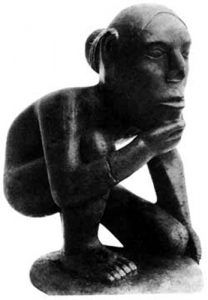 An Effigy Pipe found at the Shiloh Indian Mounds

In addition to the Shiloh site, the chiefdom included six smaller towns, each with one or two mounds, and isolated farmsteads scattered on higher ground in the river valley. Downstream on the river’s eastern bank, in Savannah, Tennessee, once stood another palisaded settlement with multiple mounds. Many of the Savannah mounds were actually built much earlier, about 2,000 years ago, but, the site was reoccupied at roughly the same time as the Shiloh site. We don’t know whether these two towns were occupied at exactly the same time. Modern buildings in Savannah have obliterated most of the prehistoric site.

The Shiloh chiefdom had as neighbors, other chiefdoms in what is now Alabama, Mississippi, and western Tennessee. Most of the chiefdoms occupied portions of the major river valleys, like the Tennessee and Tombigbee Rivers. Some of the neighboring chiefdoms would have been hostile to the Shiloh chiefdom, while others were linked to Shiloh by political alliances. Archaeological evidence of these alliances survives in the form of “prestige goods” that chiefs exchanged as tokens of their friendship. Often, it can be determined where specific prestige goods were made, which reveals who these indigenous people were trading with. In the case of Shiloh, it is known that political ties existed with the powerful chiefdom at Cahokia, near St. Louis. In contrast, there is no evidence of political ties to chiefdoms in central Tennessee.