When John Brown raided Harpers Ferry in 1859, he set in motion events that led directly to the outbreak of the Civil War in 1861. Climaxing decades of bitter wrangling and pitting two vast sections of the nation against each other, Northerners called it the War of the Rebellion, Southerners — the War Between the States. A number of military operations, of which, one or more battles are associated, occurred on both sides of the conflict. There were two principal theaters in which the major military operations took place – the Eastern and the Western. In warfare, a theater is used to define a specific geographic area within which armed conflict occurs.

The Eastern Theater roughly comprised the area east of the Appalachians in the vicinity of the rival capitals of Washington and Richmond and the Western Theater, was located primarily between the western slope of the Appalachian Mountains and the Mississippi River. Lesser operations also took place along the coasts and inland waterways referred to as the Lower Seaboard Theater and Gulf Approach. In the Trans-Mississippi Theater, the region encompassed the states and territories west of the Mississippi River, but excluded those states bordering or close to the Pacific Ocean; and finally, there was just one battle in the Pacific Coast Theater. 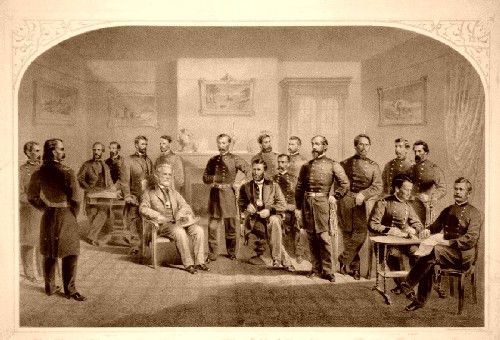 This dust was once the man,

Gentle, plain, just and resolute, under whose cautious hand,

Against the foulest crime in history known in any land or age,

Was saved the Union of these States.