The Civil War in Kentucky 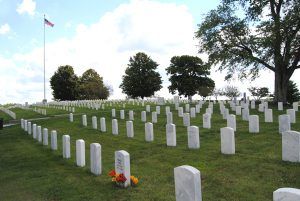 A “border state” during the Civil War, Kentucky was of key importance to the Union, so much so, that President Abraham Lincoln declared “I hope to have God on my side, but I must have Kentucky.” Pitting families, friends, and neighbors against each other, the people of Kentucky had sympathy for both sides of the critical issues between the North and South during the Civil War. Its location meant its citizens had contact with people from across the U.S., especially those traveling along the Ohio River. In the state, there were 225,000 slaves, but, there were also many people who actively supported the Underground Railroad.

During the years leading up to the Civil War, Kentucky had produced men like Henry Clay, the “Great Compromiser,” and John Crittenden, author of the Crittenden Compromise. Both of them, along with many others, worked to keep their state and the country together, but that goal seemed to be slipping away as the 1860s began.

The Civil War divided few states as deeply as it did Kentucky. Some residents, citing the state’s history of supporting compromise and nationalism, wanted to remain with the Union. Others favored the Confederacy; concentrating on the state’s ties to the South through culture–most importantly, by slave-owning–and through family. In an attempt to keep these divisions from widening further, the state legislature declared in May, 1861, a month after the firing on Fort Sumter, South Carolina, that it had decided to “occupy a position of strict neutrality.”

However, both the Union and the Confederacy were trying to convince residents to support their side, for each understood how that the state was crucial to their success. Control of Kentucky would assist in the defense of other crucial territory and provide access to key transportation routes. It had the third-largest white population of all the slave-holding states, so it contained a large number of potential soldiers, and it produced wheat and livestock, supplies both sides would need.

Unionists gradually came to dominate the state. Congressional elections in May and August, 1861 both ended with significant victories for men who favored the North. Many Kentuckians who had remained uncertain which side to support began to sympathize with the Union in September, 1861, when Confederate General Leonidas Polk took control of Columbus, a railroad junction that sat at the foot of a bluff overlooking the Mississippi River. Polk’s attempt to take the state for the Confederacy created sympathy for the North, and the Kentucky legislature petitioned the Union for assistance, and thereafter, became solidly under Union control. Union General Ulysses S. Grant soon occupied two other towns in Kentucky.

Even as Kentucky tilted towards the Union, it remained far from united. Each side recruited troops from the state, and these enlistments caused splits that ran through families and neighborhoods. All but one of Mary Todd Lincoln’s seven brothers and half-brothers, for example, fought against the Union that her husband was trying to preserve.

Kentucky was the site of fierce battles, such as Mill Springs and Perryville. It was host to such military leaders as Union General Ulysses S. Grant who first encountered serious Confederate gunfire coming from Columbus, Kentucky, and Confederate General Nathan Bedford Forrest. Forrest proved to be a scourge to the Union Army in such places as Sacramento and Paducah, where he conducted guerrilla warfare against Union forces.

When the Kentucky Legislature had taken steps that amounted to an adherence to the Confederates, General Sidney Johnston immediately crossed into Kentucky and dispatched General Buckner with a division toward Louisville. General Zollicoffer entered the State and advanced as far as Somerset. Licking Station served as a temporary camp for the constant stream of recruits as well as refugees from the interior of the state who were on their way to Virginia or intended on joining the Confederate Army. In the meantime, Union General William “Bull” Nelson was instructed to collect all men available with the objective of dispersing the Confederate recruiting camp at Prestonburg thus freeing Eastern Kentucky from the threat of a Confederate presence. In late October, he gathered a force of about half a dozen regiments at Olympian Springs and began his march toward Prestonsburg. 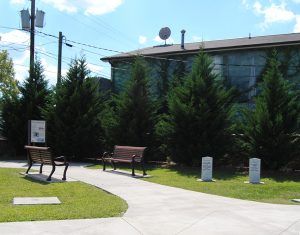 The Battle of Barbourville is commemorated in a small park in Barbourville, Kentucky, Kathy Weiser-Alexander, September, 2012.

Battle of Barbourville (September 19, 1861) – Occurring in Knox County, this skirmish took place in Barbourville, Kentucky. Union sympathizers had trained recruits at Camp Andrew Johnson, in Barbourville, throughout the summer of 1861. Confederate Brigadier General Felix Zollicoffer entered Kentucky in mid-September intending to relieve pressure on General Albert Sidney Johnston and his troops by conducting raids and generally constituting a threat to Union forces and sympathizers in the area. On September 18, 1861, he dispatched a force of about 800 men under command of Colonel Joel A. Battle to disrupt the training activities at Camp Andrew Johnson. At daylight on the 19th, the force entered Barbourville and found the recruits gone; they had been sent to Camp Dick Robinson. A small home guard force commanded by Captain Isaac J. Black met the Rebels, and a sharp skirmish ensued. After dispersing the home guard, the Confederates destroyed the training camp and seized the arms found there. This was, for all practical purposes, the first encounter of the war in Kentucky. The Confederates were making their might known in the state, countering the early Union presence. The Confederate victory resulted in estimated casualties of 15 Union and 5 Confederate.