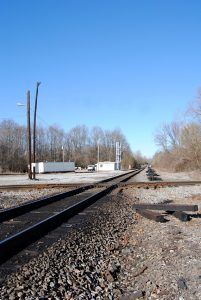 In 1854, the citizens of Tishomingo County invited two railroad companies, the Mobile & Ohio and the Memphis & Charleston, to build lines through the largely agricultural area. Within a year, the companies completed their surveys and their two routes intersected in the north-central Tishomingo County. A small town grew up at the crossroads of the two new railroad lines, originally called Cross City. By 1855, the rapidly growing town changed its name to Corinth, after the crossroads city of ancient Greece. By 1860, Corinth was called home to about 1,500 people. When the Civil War began in 1861, both Confederate and Union strategists recognized the importance of controlling Corinth due to its junction of two major rail lines. The town would become the site of two significant engagements, a siege of the town in spring 1862 and a bloody conflict in the fall of the same year.

The tracks still cross in the center of town, and trains still use them, but no one fights over them anymore. During the Civil War as many as 300,000 soldiers moved through this tiny town in northeastern Mississippi as the Union and the Confederacy fought to control the critical railroad crossroads. The evidence of their presence is everywhere.

A reconstructed earthen redoubt commemorates the men in gray who marched with slow and steady steps against its walls and the men in blue who defended it in fierce hand-to-hand combat. And, if you look carefully, you can see miles and miles of earthen fortifications, some built to protect the crossover and some to help seize it. These trenches testify to a new kind of warfare that was tested here and would become common before the war ended in 1865.

In the years since the Civil War, Corinth has grown into a small city of about 14,000 people, but the general landscape has changed little.

The Siege of Corinth

At the end of April 1862, Union Major General Henry W. Halleck’s powerful Army group of almost 125,000 men, set out from Pittsburg and Hamburg landings in Tennessee towards Corinth, Mississippi. A Confederate force of about half that size, under the command of General P.G.T. Beauregard, waited for them, behind five miles of newly-constructed earthworks. Both commanders knew the importance of the coming battle. Halleck claimed that the railroad centers in Richmond, Virginia, and Corinth were “the greatest strategic points of the war, and our success at these points should be insured at all hazards.” Beauregard told his superiors: “If defeated here we will lose the Mississippi Valley and probably our cause . . . and our independence.”

It took Halleck a month to travel the 22 miles to Corinth. The route crossed a series of low ridges covered with dense forests and cut by stream valleys and ravines. Moving his army through the rugged country while keeping it aligned along a 10-mile front, was slow and difficult work. The weather was bad and there was little good water. Dysentery and typhoid were common. 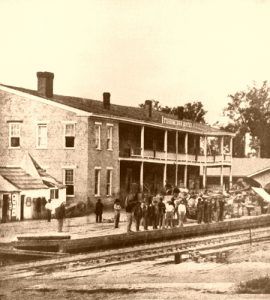 Ruse of the Whistles at Corinth, Mississippi

By May 2nd, the Union troops had closed to within 12 miles of Corinth and felt its way forward from one line of entrenchments to another. The Confederates had constructed a defensive line of earthworks anchored on the Memphis and Charleston Railroad to the west, continuing around to the north of Corinth, crossing the Mobile and Ohio Railroad and Purdy Road, then turning south following the high ground commanding Bridge Creek and crossing the Memphis and Charleston Railroad well east of the crossover, and anchoring on the Danville Road, one-half mile east of the Mobile and Ohio. These earthworks guarded the eastern and northern approaches to Corinth.

By May 4th, the Union army was within 10 miles of Corinth and the railroads. The Confederates began a series of small-scale attacks, keeping up nearly constant harassment. Halleck, cautious by nature, established an elaborate procedure to protect his army as they advanced. As the troops moved up to a new position, they worked day and night digging trenches. These “were made to conform to the nature of the ground, following the crest of the ridges… They consisted of a single ditch and a parapet… only designed to cover our infantry against the projectiles of the enemy.” As each line of earthworks was finished, the men advanced about a mile and then started digging a new line of trenches. Eventually, there were seven progressive lines and about 40 miles of trenches. Their work was described as the “most extraordinary display of entrenchment under offensive conditions witnessed in the entire war.”

The Confederates waiting in Corinth were well aware of Halleck’s slow, but constant, advance. In May, a Confederate soldier wrote his wife:

“I can sit now in my tent and hear the drums and voices in the enemy lines, which cannot be more than two miles distant. We have . . . killed and wounded every day… The Yanks are evidently making heavy preparation for the attack which cannot, I think, be postponed many days longer… Everything betokens an early engagement so make it be, for I am more than anxious that it shall come without further delay.” 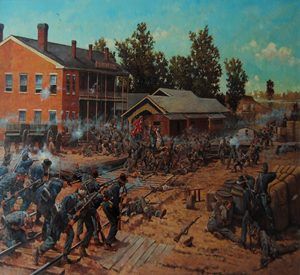 The Union Army taking control of the railroad crossing during the Siege of Corinth.

On May 21st, General Beauregard planned a counterattack, an attempt to “draw the enemy out of its entrenched positions and separate his closed masses for a battle.” The gamble came to naught because of delays in getting the troops in position to attack.

By May 25th, the long Union line was entrenched on high ground within a few thousand yards of the Confederate fortifications. From that range, Union guns shelled the Confederate defensive earthworks, and the supply base and railroad facilities in Corinth. Beauregard was outnumbered two to one. The water was bad. Typhoid and dysentery had felled thousands of his men. At a council of war, the Confederate officers concluded that they could not hold the railroad crossover.

Beauregard saved his army by a hoax. Some of the men were given three days’ rations and ordered to prepare for an attack. As expected, one or two went over to the Union with that news. During the night of May 29th, the Confederate army moved out. They used the Mobile and Ohio Railroad to carry the sick and wounded, the heavy artillery, and tons of supplies. When a train arrived, the troops cheered as though reinforcements were arriving. They set up dummy guns along the defensive earthworks. Campfires were kept burning, and buglers and drummers played. The rest of the men slipped away undetected. When Union patrols entered Corinth on the morning of May 30th, they found the Confederates gone.

During the siege, there were some 120,000 Union troops and 70,000 Confederate troops engaged. Each side had estimated casualties of about 1,000 men. Most historians believe that the Union seizure of the strategic railroad crossover at Corinth led directly to the fall of Fort Pillow, Tennessee on the Mississippi River, the loss of much of Middle and West Tennessee, the surrender of Memphis, and the opening of the lower Mississippi River to Federal gunboats as far south as Vicksburg. No Confederate train ever again carried men and supplies from Chattanooga to Memphis.