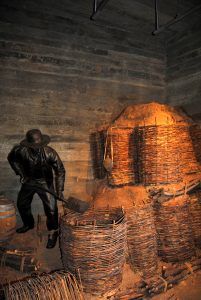 “They had come to fight and not to handle the pick and shovel….Before I had left that gallant army, however, I had learned how readily the humbler could aid the nobler duty.”

The Confederate and Union armies, stunned by the terrible carnage at the Battle of Shiloh, Tennessee, decided no position was truly secure unless it had been improved with picks and shovels. Soldiers dug deeper and more often as the war went on — virtually every man on both sides became his own engineer.

Many surviving Civil War battlefields are living testimonials to the extensive use of field fortifications during the bloody conflict between the states. Fortifications made from mounded soil, baskets, timber, and even bales of cotton were very effective. Rapid field entrenchments were a response to increased weapons technology. Rifle muskets, deadly accurate at several hundred yards, and close order field artillery made previous battle tactics obsolete. The earthworks were designed to protect troops against this increased firepower.

The area surrounding Corinth, Mississippi, was fortified heavily by the Union and Confederate forces who struggled to control the strategically important town. Today, those earthworks stand as silent sentinels, bearing witness to the bloody affairs of war. They are some of the best-preserved earthworks in the country and are designated National Historic Landmarks. Viewing these fragile remnants is a highlight when touring Civil War sites in Corinth, Mississippi. 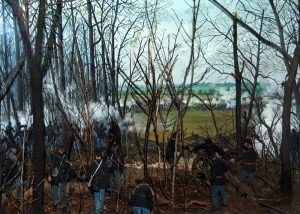 Field fortifications had several purposes. The first and most obvious was to protect against incoming fire. Projectiles would bury themselves in earthworks, inflicting little damage to the soldiers inside. Second, fortifications were meant to place obstacles before an attacking force to impede and slow the assault. Abatis, trees felled in the direction of the enemy with sharpened ends, offered such obstacles. The last purpose was to provide an open field of fire in which the defenders could shoot down attacking soldiers. This fire was most effective when it could be poured into the enemy from more than one direction. The shape of fortifications was intended to provide for such crossfire. Army officers of both Northern and Southern forces understood the importance of using field fortifications for defensive and offensive operations early in the war. Advances in weapons technology necessitated a shift in warfare. The officers educated at West Point had completed courses on the science of field fortifications under the direction of Dennis Hart Mahan.

Mahan’s classes had their desired effect, and his influence was seen in the strategy developed by his pupils throughout the war. For example, after serving as commander of Confederate forces in and around Corinth during the spring of 1862, General P.G.T. Beauregard had this to say of his army and fortifications, “They had come to fight, and not to handle the pick and shovel….Before I had left that gallant army, however, I had learned how readily the humbler could aid the nobler duty.” The men on the front lines found they could improve their chances for success, and more importantly, for survival, by digging in. Simple rifle-pits could be dug by infantry soldiers in earnest, even under fire. These crude pits could be improved to form trenches with head logs and ditches in front.

Following the retreat from Shiloh, Tennessee, the Confederate Army spent the majority of April 1862 constructing and occupying a defensive line of earthworks on the northern and eastern sides of Corinth. As Federal forces under the command of Henry Halleck advanced on Corinth, they put on one of the more elaborate displays of offensive entrenchments in the entire war. As the army advanced, it sent out skirmishers to clear the way, then constructed a new line of earthworks to occupy. This cautious strategy transformed the landscape between Shiloh and Corinth and turned a 22-mile journey into a 30-day exercise in field fortification science. The strength of these fortifications and the size of the force convinced Beauregard his Southern army could not defend Corinth. The use of offensive fortifications aided National forces in capturing Corinth on May 29, 1862, without the calamity of a significant battle. 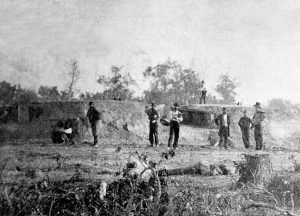 Fortifications for the artillery were much more difficult to build. The size of artillery pieces and the number of men needed to operate them required larger, more complex structures. Six such structures were constructed through the summer of 1862 around the southern and western approaches to the town and named Batteries A through F. Following their completion, Union General William S. Rosecrans ordered a new series of seven fortifications built. These positions were meant to be an inner line of defense for the rail junction and depot in Corinth that a smaller force could garrison. These earthworks were located in a semicircle within roughly a half-mile radius around the rail crossover, guarding the northern, southern, and western approaches into town.

Battery Robinett, one of the structures ordered built by Rosecrans, was a wedge-shaped work called a lunette. It was roughly 35 yards wide by 40 yards deep and was open to the rear. It had seven-foot-tall parapets, a ten-foot-wide ditch in front, embrasures for heavy guns, and was armed with three twenty-pounder Parrott rifled cannon. The walls were reinforced by gabions (earth-filled baskets) and fascines (woven bundles of brush). A covered way, or communication trench, linked the fort with the Memphis & Charleston Railroad cut to the south. The approach to Robinett was obstructed by abatis. General Rosecrans further ordered the construction of breastworks between the seven redoubts that would offer infantry troops to fire from a protected position. During the Battle of Corinth, the fight for Robinett was bloody and desperate. A Confederate attack against the bastion resulted in a hand-to-hand struggle for the position. However, the strength of Federal defensive fortifications proved effective against the Confederate assaults.

When examining the surviving Civil War earthworks, it can be difficult to envision the scene during the 1860s. These seemingly haphazardly placed mounds of earth were carefully engineered and constructed field fortifications. Each structure and angle was erected to enable the soldiers inside to cover as much ground as possible with fire. The earthen mounds were reinforced with wooden planks, logs, or gabions. Often, the eroded, fading trace of these works bare little resemblance to the complex, massive fortifications of battle. Yet, with just a little imagination, one can envision how things would have appeared to those soldiers building, manning, and fighting in these works during the
Civil War. 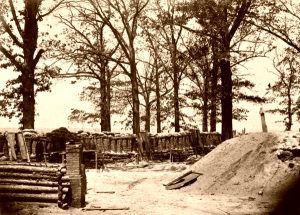