Confederate General Daniel Ruggles, after having witnessed the unsuccessful attacks against the position, formed a line of artillery consisting of as many as 62 guns and concentrated its fire upon the Federal line. With the aid of these cannon, the Confederates were able to form a circle around the Hornet’s Nest, surrounding and capturing General Prentiss, with more than 2,200 troops, late in the day on April 6th. 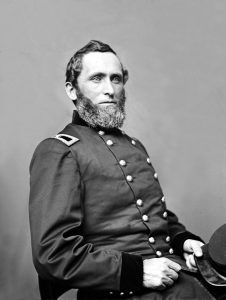 Almost as soon as the battle ended, key participants began describing the action at the Hornet’s Nest as the central event of the battle. Defenders of the area, such as Brigadier General Benjamin Prentiss, openly argued that their stand made against so many brave Confederate attacks held the Union line long enough for army commander General Ulysses S. Grant to establish a last line of defense. Over the years, historians expanded on the veteran’s remembrances and even today, continue to argue the importance of the Hornet’s Nest. In portraying the Hornet’s Nest as the savior of Grant’s army, historians made it an American icon.

However, historians today believe that a different story probably took place and question the overall importance of the Hornet’s Nest’s role in the battle.

Several pieces of evidence offer insight into the context of the battle as a whole. The number of dead and wounded in the area shows that the Hornet’s Nest did not see the heaviest fighting at Shiloh. An 1867 document, produced by laborers locating bodies on the battlefield, states that the heaviest concentrations of dead lay on the eastern and western sectors of the battlefield and that the dead were fairly light in the center, where the Hornet’s Nest was located. That, in itself, states, that casualties were fewer in the center where, according to early writings, the heaviest and most important fighting took place.

Supporting this point are casualty figures for the units engaged in the Hornet’s Nest. Colonel James M. Tuttle’s brigade of four Iowa regiments, which held the Hornet’s Nest and the road in front of Duncan Field, sustained a total of 235 killed and wounded in the battle – a number less than some individual regiments sustained on other parts of the field. Troop positions also show that the Hornet’s Nest was not a critical area on the field for most of the day. When they went into action, Colonel Thomas W. Sweeny’s Union brigade of six regiments, positioned in Duncan Field, north of the Corinth Road, did not have ample room to deploy. As a result, only two regiments went online while Sweeny held the other four in reserve. 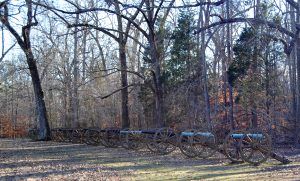 Once the Union line began to fall apart on either side of the Hornet’s Nest, Sweeny began to send his reserve regiments as reinforcements for the other more critical areas. He sent two Illinois regiments to the Peach Orchard sector and one to the north to aid Major General John A. McClernand. Only one regiment went to aid the Hornet’s Nest. Had the Hornet’s Nest been a critical point with desperate and severe fighting, Sweeny probably would not have sent his regiments away from the area. Furthermore, troop position tablets show that very little action took place in Duncan Field. Confederate officers, knowing what would happen to charges across open ground, chose to seek cover while making their attacks. Duncan Field, where myth states that so many Confederate charges took place, has no Confederate tablets denoting troop positions.

If the Hornets’ Nest was not the central event in the Battle of Shiloh, why then, did it become so important to historians? The answer is simple. For years after the Civil War, veterans of the Hornet’s Nest emphasized their role in the battle, claiming that their sacrifice had provided Grant with enough time to establish a last line of defense. Division commander Brigadier General Benjamin M. Prentiss wrote a widely circulated report after the battle, which emphasized his role in the battle as well as that of his troops. Even after the war, veterans still claimed the defense of the Hornet’s Nest was the central event of Shiloh.

The new interpretations of Hornets’ Nest do not minimize the role of the fighting in the center of the battlefield. The area was indeed important, especially later in the day when almost every Confederate unit on the battlefield concentrated at that point. Many Confederate charges swept forward into the grueling Federal fire, only to be turned away. Hundreds of brave men and boys lost their lives in the Hornet’s Nest. For all these reasons, the Hornets Nest continues to be very important; however, perhaps not as important as other, less well-known operations taking place simultaneously on other parts of the battlefield.

After the Battle of Shiloh, Union troops would continue into Corinth, Mississippi, where opposing forces would battle between April 29-June 10, 1862 in the Siege of Corinth. When General P.G.T Beauregard evacuated the town, the Union had consolidated their position, ending the Cumberland and Tennessee Rivers Campaign.

The Union victory at the bloody Battle of Shiloh resulted in estimated casualties of 13,047 Union and 10,699 Confederate. Among these was Confederate Army commander, General Albert Sidney Johnston, who was killed on April 6, 1862. In all of American History, he is the highest-ranking American military officer ever to be killed in action.

The battle also changed the way that both armies conducted their maneuvers. Determining that no position was truly secure unless it had been improved with picks and shovels, soldiers were required to dig deeper and more often as the war went on. (See Pick & Shovel Warfare in the Civil War) 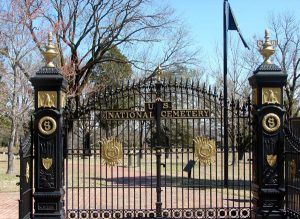 In 1866, the War Department established a cemetery on the Shiloh Battlefield, in southwestern Tennessee In order to bury the dead not only from the April 6-7, 1862, Battle of Shiloh but also from all the operations along the Tennessee River, workers began building the “Pittsburg Landing National Cemetery.” Changed to “Shiloh National Cemetery” in 1889, the cemetery holds 3,584 Civil War dead, 2,359 of whom remain unknown. In the fall of 1866, workers disinterred the dead from 156 locations on the battlefield, and 565 different locations along the Tennessee River. Wooden headboards first marked each grave, but, were replaced in 1876 and 1877 by granite stones. Tall stones marked the known dead and square, short stones denoted unknown soldiers.

Workers built a stone wall around the cemetery in 1867 and fashioned ornamental iron gates at the entrance in 1911. A superintendent cared for the cemetery until it was officially consolidated with Shiloh National Military Park in 1943. The results of so much labor produced what one observer called “the handsomest cemetery in the South.”

Although established as a Civil War burial ground, the Shiloh National Cemetery now holds deceased soldiers from later American wars. Many World War I and II, Korea, and Vietnam burials are in the newest section of the cemetery. There is also one Persian Gulf War memorial. Total interred in the cemetery now stands as 3,892. Although the cemetery was officially closed in 1984, it still averages two or three burials a year, mostly widows of soldiers already interred.