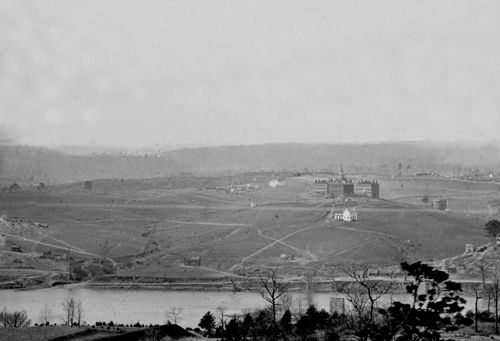 Knoxville seen from the south bank of Tennessee River, East Tennessee University in the middle distance, George N. Barnard, about 1864

A series of battles and maneuvers in East Tennessee during the fall of 1863. Union forces under Major General Ambrose Burnside occupied Knoxville, Tennessee, and Confederate forces under Lieutenant General James Longstreet were detached from General Braxton Bragg’s Army of Tennessee at Chattanooga to prevent Burnside’s reinforcement of the besieged Union forces there. Ultimately, Longstreet’s own siege of Knoxville ended when Union Major General William T. Sherman led the Army of the Tennessee and other troops to Burnside’s relief after Union troops had broken the Confederate siege of Chattanooga. Although Longstreet was one of General Robert E. Lee’s best corps commanders in the East, he was unsuccessful in his role as an independent commander in the West and accomplished little in the Knoxville Campaign.

Campbell’s Station (November 16, 1863) –  In early November 1863, Lieutenant General James Longstreet, with two divisions and about 5,000 cavalry troops, were detached from the Confederate Army of Tennessee near Chattanooga to attack Major General Ambrose E. Burnside’s Union Department of the Ohio troops at Knoxville, Tennessee. Following parallel routes, Longstreet and Burnside raced for Campbell’s Station, a hamlet where the Concord Road, from the south, intersected the Kingston Road to Knoxville. Burnside hoped to reach the crossroads first and continue to safety in Knoxville; Longstreet planned to reach the crossroads and hold it, which would prevent Burnside from gaining Knoxville and force him to fight outside his earthworks. On a rainy November 16, Major General Ambrose E. Burnside’s advance reached the vital intersection and deployed first by forced marching. The main column arrived at noon with the baggage train just behind. Scarcely 15 minutes later, Longstreet’s Confederates approached. Longstreet attempted a double envelopment: attacks timed to strike both Union flanks simultaneously. Major General Lafayette McLaw’s Confederate division struck with such force that the Union right had to redeploy, but held. Brigadier General Micah Jenkins’s Confederate division maneuvered ineffectively as it advanced and was unable to turn the Union left. Burnside ordered his two divisions astride the Kingston Road to withdraw three-quarters of a mile to a ridge in their rear. This was accomplished without confusion. The Confederates suspended their attack while Burnside continued his retrograde movement to Knoxville. Had Longstreet reached Campbell’s Station first, the Knoxville Campaign’s results might have been different. The Union victory resulted in estimated casualties of 400 Union and 570 Confederate.

Siege of Knoxville (November 17-December 4, 1863) – On November 17, the bulk of Union Major General Ambrose E. Burnside’s army was within Knoxville’s defensive perimeter Tennessee, and the Siege of Knoxville began. The Confederates were not equipped for siege operations and were running short on supplies. On November 18, Union Brigadier General William P. Sanders, leading the cavalry that was screening Burnside’s withdrawal, was mortally wounded in a skirmish. In the meantime, Confederate Lieutenant General James Longstreet planned an attack as early as November 20, but he delayed, waiting for reinforcements under Brigadier General Bushrod Johnson (3,500 men) and the cavalry brigade of General William “Grumble” Edmondson Jones. Colonel Edward Porter Alexander, Longstreet’s artillery chief, wrote that “every day of delay added to the strength of the enemy’s breastworks.” Longstreet’s troops sealed off all approaches to Knoxville, hoping to starve the garrison into submission. Longstreet and his chief engineer, Brigadier General Danville Leadbetter, determined that the old Confederate Fort Loudon (renamed Fort Sanders by the Federals) offered the weakest link. 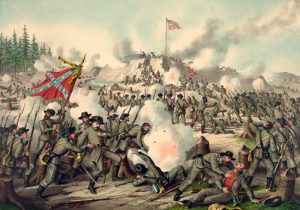 Fort Sanders (November 29, 1863) – Also called the Battle of Fort Loudon, this battle took place as part of the Confederates’ determination to take Knoxville, Tennessee. The Confederates decided that the old fort was the only vulnerable place to penetrate Union Major General Ambrose E. Burnside’s fortifications, which enclosed the city and successfully concluded the siege, already a week long. The fort surmounted an eminence just northwest of Knoxville. Northwest of the fort, the land dropped off abruptly. Confederate Lieutenant General James Longstreet believed he could assemble a storming party, undetected at night, below the fortifications and, before dawn, overwhelm Fort Sanders by a coup de main. Following a brief artillery barrage directed at the fort’s interior, three Rebel brigades charged. Union wire entanglements-–telegraph wire stretched from one tree stump to another to another-–delayed the attack, but the fort’s outer ditch halted the Confederates.

This ditch was twelve feet wide and from four to ten feet deep with vertical sides. The fort’s exterior slope was almost vertical, also. Crossing the ditch was nearly impossible, especially under withering defensive fire from musketry and canister. Confederate officers did lead their men into the ditch, but, without scaling ladders, few emerged on the scarp side, and a small number entered the fort to be wounded, killed, or captured. The attack lasted a short twenty minutes. Longstreet undertook his Knoxville expedition to divert Union troops from Chattanooga and get away from General Braxton Bragg, with whom he was engaged in a bitter feud. His failure to take Knoxville scuttled his purpose. This was the decisive battle of the Knoxville Campaign. This Confederate defeat, plus the loss of Chattanooga on November 25th, put much of East Tennessee in the Union camp. The engagement resulted in an estimated 100 Union casualties and 780 Confederate. When Longstreet learned of General Bragg’s route from Chattanooga and Sherman’s approach from the south, he lifted the siege on December 4th and withdrew into winter quarters in upper East Tennessee.

Bean’s Station (December 14, 1863) –  Lieutenant General James Longstreet abandoned the Siege of Knoxville on December 4, 1863, and retreated northeast towards Rogersville, Tennessee. Union Major General John G. Parke pursued the Confederates but not too closely. Longstreet continued to Rutledge on December 6th and Rogersville on the 9th. Parke sent Brigadier General J.M Shackelford on with about 4,000 cavalry and infantry troops to search for Longstreet.

On the 13th, Shackelford was near Bean’s Station on the Holston River in present-day Grainger County, Tennessee. Longstreet decided to go back and capture Bean’s Station. Three Confederate columns and artillery approached Bean’s Station to catch the federals in a vice. By 2:00 am on the 14th, one column was skirmishing with Union pickets. The pickets held out as best they could and warned Shackelford of the Confederate presence. He deployed his force for an assault. Soon, the battle started and continued throughout most of the day. Confederate flanking attacks and other assaults occurred at various times and locations, but the Federals held until southern reinforcements tipped the scales. By nightfall, the Federals were retiring from Bean’s Station through Bean’s Gap and Blain’s Cross Roads. Longstreet set out to attack the Union forces again the next morning, but as he approached them at Blain’s Cross Roads, he found them well-entrenched. Longstreet withdrew, and the Federals soon left the area. The Knoxville Campaign ended following the battle of Bean’s Station. Longstreet soon went into winter quarters at Russellville. Their success meant little to Confederate efforts except to prevent disaster. The Confederate victory resulted in estimated casualties of this battle were 700 Union and 900 Confederate.