General Sherman and his troops attacked and seized the north end of Missionary Ridge at 4 p. m. against only Confederate outpost opposition. To his surprise, Sherman found a deep and wide ravine separating the north end of the ridge from Tunnel Hill immediately southward, his real objective. Cleburne’s Division of Confederate troops had hurried to Tunnel Hill only an hour or two before Sherman seized the north end of Missionary Ridge, and they were busily engaged entrenching there when Sherman arrived across the ravine from them. Sherman did not attack Tunnel Hill that afternoon but entrenched where he was. 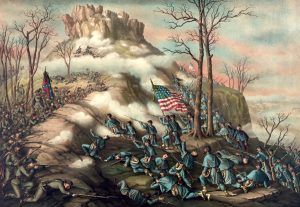 While operations were in progress, east of Chattanooga, Hooker moved into action west of the town. The failure of Osterhaus’ Division to join General Sherman resulted in another change of orders. A new plan for Hooker to take Lookout Mountain and descend into Chattanooga Valley replaced the original one of having him merely hold Lookout Valley and the route to Bridgeport. Hooker had three divisions in his force commanded by Brigadier Generals Peter J. Osterhaus, John W. Geary, and Charles Cruft, each from a different army corps. Geary was on the right at Wauhatchie, Cruft in the center, and Osterhaus near Brown’s Ferry. It was a unique team. One who was present wrote, “We were all strangers, no one division ever having seen either of the others.”

The terrain that confronted Hooker’s command was rugged, steep, heavily timbered, and topped by a rocky cliff. At the northern end, at the cliff base and halfway up the mountain, was a bench of nearly level land. On it stood the Cravens Farm. At 8:00 a.m. on November 24th,  Hooker sent Geary’s Division, supported by a brigade from Cruft’s Division, to effect a crossing of Lookout Creek. The troops accomplished this with little opposition and Geary climbed the mountain until the head of his column reached the cliff. The division then moved to the left and proceeded northward toward the point of the mountain.

While Geary climbed the mountain, Cruft, with his force, moved farther down the valley toward the Tennessee River and seized a bridge over the creek. Osterhaus’s Division then crossed the stream at that point in the face of sharp skirmishing with Confederate defenders before the latter retreated up the mountain. The three Union divisions soon joined on a common line and, supported by Union batteries on Moccasin Point, steadily drove Walthall’s Confederate brigade around the point of Lookout Mountain to the Cravens farmhouse. By noon, Hooker’s forces were in possession of the farm but the Confederates made a stand beyond the Cravens house within prepared defense works and were joined there by two brigades from the top of the mountain. Fog which covered the mountainside most of the morning became so heavy that by 2 p. m. it was almost impossible to see. This factor, plus a shortage of ammunition, caused Hooker to halt and consolidate his position. Later in the afternoon, Carlin’s brigade arrived with a re-supply of ammunition.

During the night, General Stevenson withdrew the Confederate forces from Lookout Mountain and marched them to Missionary Ridge where they joined their comrades holding that sector of the line. “The Battle Above the Clouds” was fought on the bench of land surrounding the Cravens house. There was no fighting on top the mountain. The romantic name given in later years to this action on the Union right was the result of the fog and mist which shrouded the mountain that day from observers below. It was not until the next morning that the 8th Kentucky Volunteers planted the Stars and Stripes on top of the bluff. 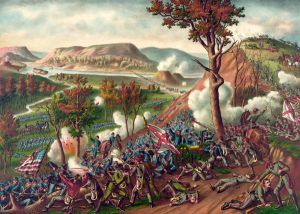 The decisive blow of the battle was at hand. Grant’s orders for the morning of November 25 were as follows: Sherman was directed to attack at daylight. Hooker was ordered to move at the same hour, and endeavor to intercept the enemy’s retreat if he still remained; if he had gone, then to move directly to Rossville and operate against the left and rear of the force on Missionary Ridge. Thomas was not to move until Hooker had reached Missionary Ridge.”

General Sherman began his attack, as directed, just after sunrise. His troops attacked Cleburne’s Division frontally, but without success. All night the Confederates had worked at strengthening their position on Tunnel Hill which now formed the Confederate right. These fieldworks gave good protection to Cleburne’s men from enemy fire. The stubbornly fighting Confederates held their positions against repeated attacks by superior numbers. This fight continued until 3:00 p.m., and is a notable example of the value to a greatly outnumbered defending force of field works on a good position. Some Union troops did make a lodgment on the slopes of Tunnel Hill in the afternoon, but a Confederate charge drove them off. Cleburne’s soldiers held the hill.

In the meantime, Hooker was in trouble — not with the enemy, but with Chattanooga Creek. He started for Rossville bright and early to get into position to strike Bragg’s left. Stevenson’s men who had evacuated Lookout Mountain during the night had burned the bridge across Chattanooga Creek and had done all they could to obstruct the roads that Hooker needed to march to Rossville. Hooker lost 3 hours building a bridge across the creek and it was late afternoon before his men took their places on Missionary Ridge.

From his post on Orchard Knob, General Grant realized that Sherman’s attacks had failed to gain their objective and that Hooker had been delayed in reaching his assigned position. To relieve some of the pressure on General Sherman, Grant ordered Thomas to move out against the Confederate center on Missionary Ridge.

The ridge that lay before the Union troops was rough and steep. It rose from 200 to 400 feet higher than the level ground at its base. Its steep slopes were broken by ravines, strewn with boulders, and dotted with stumps, the latter reminders of recently felled timber. The first line of Confederate breastworks was at the foot of the ridge. Some unfinished works had been built half-way up the slope. Finally, a third line of works was built on the natural, instead of the military, crest of the hill. Thus, Confederate fire from the crest could not cover some of the ravine approaches.

Four Union divisions headed by Generals Baird, Wood, Philip Sheridan, and R. W. Johnson started toward the ridge. The hard-charging Union soldiers soon overwhelmed the gray defenders in the rifle pits at the base of the ridge. Scarcely halting, and generally without orders to continue, the men in blue charged up the ridge. They followed the retreating Confederates so closely from the rifle pits that the Confederates on the crest in many places hesitated to fire for fear of hitting their own men. It was not long before units of the Army of the Cumberland pierced the Confederate line in several places and sent Bragg’s veterans reeling in retreat down the east slope of the ridge toward Chickamauga Creek. Sheridan pushed forward in pursuit of the retreating army, capturing men, artillery, and equipment. Even though the Confederate center had disintegrated, Hardee held his position on the Confederate right until darkness, and then began his withdrawal with Cleburne’s Division covering the retreat. Bragg’s army crossed Chickamauga Creek during the night, carrying out a surprisingly successful retreat.