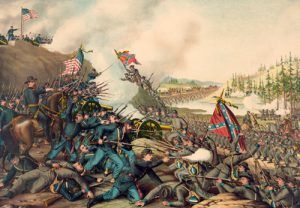 Franklin (November 30, 1864) – Having lost a good opportunity at Spring Hill to significantly hurt the Army, Confederate General John B. Hood marched in rapid pursuit of Major General John M. Schofield’s retreating Army. Schofield’s advance reached Franklin about sunrise on November 30 and quickly formed a defensive line in works thrown up by the Yankees in the spring of 1863, on the southern edge of town. Schofield wished to remain in Franklin to repair the bridges and get his supply trains over them. Skirmishing at Thompson’s Station and elsewhere delayed Hood’s march, but, around 4:00 pm, he marshaled a frontal attack against the perimeter. Two Federal brigades holding a forward position gave way and retreated to the inner works, but their comrades ultimately held a battle that caused frightening casualties. When the battle ceased, after dark, six Confederate generals were dead or had mortal wounds. Despite this terrible loss, Hood’s army, late, depleted, and worn, crawled toward Nashville. The victory resulted in an estimated 2,326 casualties and 6,262 Confederate.

Murfreesboro (December 5-7, 1864) – Also called the Battle of Wilkinson Pike and the Battle of Cedars, this conflict occurred in Rutherford County, Tennessee.  In another attempt to force Major General William T. Sherman’s army out of Georgia, General John Bell Hood led the Army of Tennessee north toward Nashville in November 1864. Although he suffered a terrible loss at Franklin, he continued toward Nashville. In operating against Nashville, he decided that the destruction of the Nashville & Chattanooga Railroad and disruption of the army supply depot at Murfreesboro would help his cause. He sent Major General Nathan Bedford Forrest, on December 4th, with an expedition, composed of two cavalry divisions and Major General William B. Bate’s infantry division, to Murfreesboro.

On December 2nd, Hood had ordered Bate to destroy the railroad and blockhouses between Murfreesboro and Nashville and join Forrest for further operations. On December 4th, Bate’s division attacked Blockhouse No. 7 protecting the railroad crossing at Overall Creek, but forces fought it off. On the morning of the 5th, Forrest headed out toward Murfreesboro, splitting his force, one column to attack the fort on the hill and the other to take Blockhouse No. 4, both at La Vergne. Upon his demand for surrender at both locations, the garrisons did so. Outside La Vergne, Forrest hooked up with Bate’s division, and the command advanced on to Murfreesboro along two roads, driving the Yankees into their Fortress and encamped in the city outskirts for the night. The next morning, on the 6th, Forrest ordered Bate’s division to “move upon the enemy’s works.” Fighting flared for a couple of hours, but the Yankees ceased firing, and both sides glared at each other for the rest of the day. Confederate Brigadier General Claudius Sears’s and Brigadier General Joseph B. Palmer’s infantry brigades joined Forrest’s command in the evening, further swelling his numbers. On the morning of the 7th, Major General Lovell Rousseau, commanding all of the forces at Murfreesboro, sent two brigades out under Brigadier General Robert Milroy on the Salem Pike to feel out the enemy. These troops engaged the Confederate, and fighting continued. At one point, some of Forrest’s troops broke and ran, causing disorder in the Rebel ranks; even entreaties from Forrest and Bate did not stem the rout of these units. The rest of Forrest’s command conducted an orderly retreat from the field and encamped for the night outside Murfreesboro. Forrest had destroyed railroad tracks, blockhouses, some homes and generally disrupted operations in the area. The victory resulted in an estimated 225 casualties and 197 Confederate. 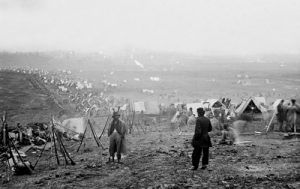 Nashville (December 15-16, 1864) –  In a last desperate attempt to force Major General William T. Sherman’s army out of Georgia, General John Bell Hood led the Army of Tennessee north toward Nashville in November 1864. Although he suffered terrible losses at Franklin on November 30th, he continued toward Nashville. By the next day, Major General George H. Thomas’s army’s various elements had reached Nashville. Hood reached the outskirts of Nashville on December 2nd and occupied positions on a line of hills parallel to those of the and began erecting fieldworks. Army Engineer, Brigadier General James St. Clair Morton, had overseen the construction of sophisticated fortifications at Nashville in 1862-63, strengthened by others, which would soon see use. From the 1st through the 14th, Thomas made preparations for the Battle of Nashville, in which he intended to destroy Hood’s army. On the night of December 14th, Thomas informed Major General Henry W. Halleck, acting as Major General Ulysses S. Grant’s chief of staff, to attack the next day. Thomas planned to strike both of Hood’s flanks.

Before daylight on the 15th, the first of the troops, led by Major General James Steedman, set out to hit the Confederate right. The attack was made, and the forces held down one Rebel corps there for the rest of the day. Attack on the Confederate left did not begin until the afternoon when a charge commenced on Montgomery Hill. With this classic charge’s success, attacks on other parts of the Confederate left commenced, eventually successful. By this time, it was dark, and the fighting stopped for the day. Although battered and with a much smaller battle line, General Hood was still confident. He established a main line of resistance along the base of a ridge about two miles south of the former location, throwing up new works and fortifying Shy’s and Overton’s Hills on their flanks. The 4th Army Corps marched out to within 250 yards, in some places, of the Confederate’s new line and began constructing fieldworks. Other troops moved out toward the new Confederate line during the rest of the morning and took up positions opposite it. The attack began against Hood’s strong right flank on Overton’s Hill. The same brigade that had taken Montgomery Hill the day before received the nod for the charge up Overton’s Hill. Although gallantly conducted, this charge failed, but other troops under Major General A.J. Smith successfully assaulted Shy’s Hill on their fronts. Seeing the success along the line, other troops charged up Overton’s Hill and took it. Hood’s army fled. Thomas had left one escape route open, but the army set off in pursuit. For ten days, the pursuit continued until the beaten and battered Army of Tennessee re-crossed the Tennessee River. Hood’s army was stalled at Columbia, beaten at Franklin, and routed at Nashville. Hood retreated to Tupelo and resigned his command. Resulting in a clear victory, the estimated casualties were 2,140 and 4,462 Confederate.

In November 1864, Confederate Major General John C. Breckinridge undertook an expedition into East Tennessee from Virginia to secure the countryside for food and forage and drive the Federals from the area. Breckinridge anticipated that Confederate sympathizers would join his force and help drive the Yankees from the area. In the meantime, a Federal force under the command of Brigadier General Alvan C. Gillem had advanced beyond Greeneville but retired in front of the larger Confederate force moving out of Jonesborough towards Greeneville. In the hopes of protecting the rail lines to Knoxville, the Federals fell back to Bull’s Gap east-southeast of Whitesburg on the East Tennessee & Virginia Railroad.

Bull’s Gap (November 11-13, 1864) – On November 10th, forces were at Bull’s Gap on the East Tennessee & Virginia Railroad. The Confederates attacked them on the morning of the 11th but were repulsed by 11:00 am. Artillery fire continued throughout the day. The next morning, both sides attacked; the Confederates sought to hit the forces in various locations, but they gained little. The next day firing occurred throughout most of the day, but the Confederates did not assault the lines because they were marching to flank them on the right. Before making the flank attack, the forces, short on everything from ammunition to rations, withdrew from Bull’s Gap after midnight on the 14th. Breckinridge pursued, but the Federals received reinforcements, and foul weather played havoc with the roads and streams. Breckinridge, with most of his force, retired back to Virginia. This victory was a temporary setback in the Federal plans to rid East Tennessee of Confederate influence. The Confederate victory resulted in an estimated 241 casualties. The number of Confederate casualties is unknown.