Wanting to push the Confederates out of their winter headquarters and having received reports of good forage south of the French Broad River, Union forces under Major General John G. Parke advanced on the Dandridge area, with orders to cross the river and occupy the area for the Federals. This movement forced Confederate Lieutenant General James Longstreet, operating around Dandridge, to fall back beyond Kimbrough’s Crossroads.

Mossy Creek (December 29, 1863) – Union Brigadier General Samuel D. Sturgis received a report on the night of December 28, 1863, that a Confederate Cavalry brigade was in the neighborhood of Dandridge that afternoon. Surmising that the cavalry force was split, Sturgis decided to meet and defeat, and possibly capture this portion. He ordered most of his troopers out toward Dandridge on two roads. After these troops had left, Major General William T. Martin, commander of Longstreet’s Confederate cavalry, now reunited, attacked the remainder of Sturgis’s force at Mossy Creek at 9:00 am.

First, Sturgis sent messages to his subordinates on the way to Dandridge to return promptly if they found no enemy there. The Confederates advanced, driving the Federals in front of them. Some of the Union troopers who had set out for Dandridge returned. Around 3:00 pm, fortunes changed as the Federals began driving back the Confederates.

By dark, the Rebels were back to the location from which they had begun the battle. Union pursuit was not mounted that night, but Martin retreated from the area. After the victory at Mossy Creek, the Union held the line about Talbott’s Station for some time. The Union victory resulted in estimated casualties of 151 Union. The number of Confederate casualties is unknown.

Dandridge (January 17, 1864) – Union forces under Major General John G. Parke advanced on Dandridge, Tennessee, near the East Tennessee & Virginia Railroad, on January 14, forcing Lieutenant General James Longstreet’s Confederate troops to fall back. However, Longstreet moved additional troops into the area on the 15th to meet the enemy and threaten the Union base at New Market. On the 16th, Brigadier General Samuel D. Sturgis, commanding the Cavalry Corps, Army of the Ohio, rode forward to occupy Kimbrough’s Crossroads. As the Union cavalry neared the crossroads, they discovered an enemy infantry division with artillery that had arrived the day before. The Union cavalry could not dislodge these Rebels and was compelled to retire to Dandridge. About noon the next day, Sturgis received information that the Confederates were preparing for an attack, so he formed his men into the line of battle. About 4:00 pm, the Confederates advanced, and the fighting began. The battle continued until after dark, with the Federals occupying about the same battle line as when the fighting started. The Union forces fell back to New Market and Strawberry Plains during the night, but the Rebels were unable to pursue because of the lack of cannons, ammunition, and shoes. For the time being, the Union forces left the area. Though considered a Confederate victory, they had failed to destroy or capture the Federals. The estimated casualties were 150 Union; the number of Confederate is unknown.

Fair Garden (January 27, 1864) – After the Battle of Dandridge, the Union cavalry moved to the south side of the French Broad River and had disrupted Confederate foraging, and captured numerous wagons in that area. On January 25, 1864, Lieutenant General James Longstreet, commander of the Department of East Tennessee, instructed his subordinates to do something to curtail Union operations south of the French Broad. On the 26th, Brigadier General Samuel D. Sturgis, having had various brushes with Confederate cavalry, deployed his troopers to watch the area fords.

Two Confederate cavalry brigades and artillery advanced from Fair Garden in the afternoon but were checked about four miles from Sevierville. Other Confederates attacked a Union cavalry brigade at Fowler’s on Flat Creek and drove it about two miles. No further fighting occurred that day. Union scouts observed that the Confederates had concentrated on the Fair Garden Road, so Sturgis ordered an attack there in the morning. In a heavy fog, Colonel Edward M. McCook’s Union division attacked and drove back Major General William T. Martin’s Confederates until about 4:00 pm. At that time, McCook’s men charged with sabers and routed the Rebels. Sturgis set out in pursuit on the 28th and captured and killed more of the routed Rebels. The Union forces, however, observed three of Longstreet’s infantry brigades crossing the river. Sturgis decided to evacuate the area, realizing his weariness from fighting, lack of supplies, ammunition, weapons, and the enemy’s overwhelming strength. Sturgis determined to attack Brigadier General Frank C. Armstrong’s Confederate cavalry division before leaving, which he had learned was about three or four miles away, on the river. Unbeknownst to the attacking Federals, Armstrong had strongly fortified his position, and three infantry regiments had arrived to reinforce him. Thus, the Union troops suffered severe casualties in the attack. The battle continued until dark when the Federals retired from the area. The Federals had won the big battle, but the fatigue of continual fighting and lack of supplies and ammunition forced them to withdraw. A Union victory, the battle resulted in an estimated 100 Union casualties and 165 Confederate.

In March 1864, Confederate Major General Nathan Bedford Forrest set out from Columbus, Mississippi, with a force of fewer than 3,000 men on a multipurpose expedition to recruit and re-outfit his troops and disperse the Federals from West Tennessee and Kentucky. The campaign consisted of two battles: Paducah, Kentucky, and the other at Fort Pillow, Tennessee. 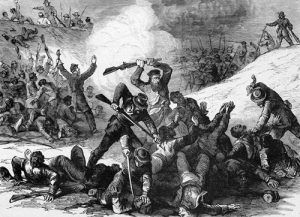 The garrison was unable to depress its artillery enough to cover the fort’s approaches, and Rebel sharpshooters, on the surrounding knolls, began firing into the fort, killing Major Booth. Major William F. Bradford then took over command of the garrison. The Confederates launched a determined attack at 11:00 a.m., occupying more strategic locations around the fort, and Forrest demanded unconditional surrender. Bradford asked for an hour for consultation, and Forrest granted twenty minutes. Bradford refused to surrender, and the Confederates renewed the attack, soon overran the fort, and drove the Federals down the river’s bluff into a deadly crossfire. Casualties were high, and only 62 of the U.S. Black Troops survived the fight. Many accused the Confederates of perpetrating the black troops’ massacre, a controversy that continues to this day. The Confederates evacuated Fort Pillow that evening, so they gained little from the attack except for a temporary disruption of Union operations. The “Fort Pillow Massacre” became a Union rallying cry and cemented resolve to see the war through to its conclusion. The Confederate victory resulted in estimated casualties of 654 Union and 80 Confederate.