Commodore Perry Owens was a lawman and gunfighter of the Old West. One of his many exploits was the Owens-Blevins Shootout in Arizona during the Pleasant Valley War.

Born on July 29, 1852, in Hawkins County, Tennessee, Owens was named for the great naval commander Commodore Perry, who was famous for his victory over British naval forces in 1813. Later his family moved to Indiana, but he ran away from home when he was just 13 years old. He soon got a job working as a buffalo hunter for the railroad, where he became an incredible shot. He could shoot a rifle accurately from the hip, was ambidextrous, and wore two pistols. When that job was done, he moved on to work as a cowboy in Oklahoma and New Mexico.

By 1881, Owens had moved on to Arizona, where he homesteaded near Navajo Springs. In 1886, he was elected sheriff of Apache County and was credited with taming the lawless town of Holbrook. In September 1887, while trying to subdue one of the factions involved in the Pleasant Valley War, a gunfight ensued. Referred to as the Owens-Blevins Shootout, he took on several men and came out unscraped. However, rather than seeing Owens as a hero, he was relieved of his commission. He moved on and was later in Seligman. Arizona, where he ran a saloon. 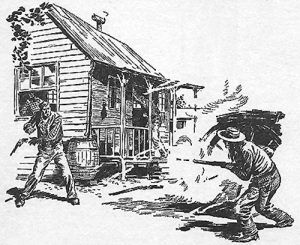