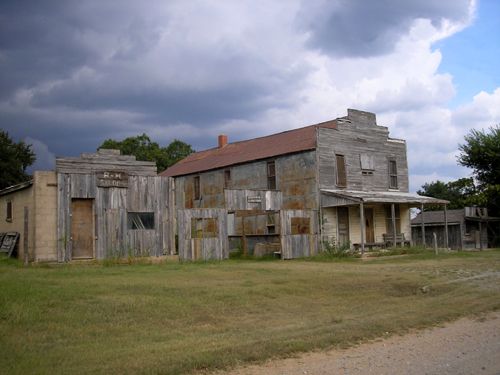 Though more furious and more deadly than the Gunfight at the O.K. Corral in Tombstone, Arizona, the Ingalls, Oklahoma shoot-out between the Doolin-Dalton Gang and U.S. Deputy Marshals is not nearly as well known.

One of the many hideouts used by the Doolin-Dalton Gang in the early 1890s was the small community of Ingalls, Oklahoma. Unfortunately, this small town was a haven for numerous outlaws, as residents tolerated them for their free-spending ways and the bad men behaved themselves to safeguard their hideout.

In August 1893, several members of the outlaw gang, including Bill Doolin, Bill Dalton, George “Red Buck” Weightman, George “Bitter Creek” Newcomb, Charlie Pierce, “Arkansas Tom” Jones, “Tulsa Jack” Blake, and “Dynamite Dick” Clifton, were taking refuge in the small town, most of them having been in town for weeks living at the city hotel and spending their time at the Ransom Saloon.

When U.S. Marshals got word of their location, Marshal Evett Dumas “E.D.” Nix formed a posse of some 27 deputy marshals and Indian Police and headed towards Ingalls. Camping out along a creek the night before, they were seen by a young boy, who the deputies held overnight. However, the boy slipped away early the next morning and ran into Ingalls, telling the outlaws, “The marshals are coming.”

The boy’s warning gave the outlaws time to saddle their horses at the livery stable, but rather than making a run for it, they chose to return to their poker game at the saloon.

On the morning of September 1, 1893, the posse crept into town while the outlaws were drinking and gambling in the saloon. When Newcomb stepped out of the saloon and got on to his horse, he was fired upon by one officer. However, “Arkansas Tom” Jones, who was sick in bed at the O.K. Hotel, returned the fire from his second-story window, mortally wounding U.S. Deputy Marshal Thomas Hueston, who would die the next day. After firing just a couple of rounds, Newcomb was wounded but was able to escape.

Within seconds a full-out gunfight erupted with the outlaws shooting their way from the saloon to the nearby livery stable. Fugitives Red Buck, Bill Dalton, and “Tulsa Jack” Blake then mounted their horses and came out of the stable with their guns blazing. When Deputy Lafeyette Shadley shot at Bill Dalton, the lawman instead hit the outlaw’s horse, toppling Dalton to the ground. Dalton returned the fire, hitting Shadley, who would die two days later. In the meantime, Bill Doolin shot and killed Deputy Marshal Richard Speed. Outlaw, Dan “Dynamite Dick” Clifton and Charlie Pierce were also hit and wounded, but both could still ride.

All the outlaws escaped except “Arkansas Tom” Jones, who was trapped in the hotel room when  Deputy Marshal Jim Masterson threatened to throw dynamite into his hiding place. Though there was talk of Arkansas Tom Jones being lynched, he was later sent to federal prison in Guthrie, Oklahoma Territory.

In the shooting frenzy, an innocent bystander named Young Simmons was also killed when he tried to take cover inside Vaughn’s Saloon. Another citizen, known only as Old Man Ramson, was also hit in the leg but survived. Also wounded was the saloon bartender, a Mr. Murray, an ally of the outlaw gang, fired on the deputies from his front doorway. He was shot in the ribs and the arm, arrested and sent to prison. Two years after his release, Murray would pursue damages against the government for his injuries but lost his case due to U.S. Marshal Nix’s testimony defending his deputy marshals’ actions.

In the end, the outlaws won the battle but lost the war, as eventually, every member of the gang who had escaped from the Ingalls gunfight would be killed, most by U.S. Deputy Marshals.

Ingalls, Oklahoma, located about halfway between Stillwater and Yale, Oklahoma, is no longer shown on state highway maps. Only a few deserted buildings, stone foundations, and a stone memorial mark the site of the famous gunfight. Settled after the land rush of 1889 into the “Unassigned Lands” between the Chickasaw Nation to the south and the Cherokee Outlet to the north, Ingalls was a thriving community of 150 people in the 1890’s; however, by 1907, the post office was closed. The site is located about 9 miles east of Stillwater, Oklahoma, and 1 mile south at Ingalls Road.

“Arkansas Tom” Jones was sick in bed at the Ingalls  O.K. Hotel but shot from the window, wounding  U.S. Deputy Marshal Thomas Hueston, who would die the next day.

U.S. Marshal Evett Dumas “E.D.” Nix’ account of the battle, as written in a letter to Attorney General Judson Harmon on July 30, 1895:

“One George Ransom owned a saloon in the town of Ingalls, and this man Murray worked for him as a bartender. The outlaws Bill Doolin “Bitter Creek,” “Tulsa Jack,” “Dynamite Dick, “Red Buck,” Tom Jones and numerous others made this saloon their headquarters, and Ransom, Murray, and other citizens catered to their trade, carried the news of the movements of the Deputy Marshals, furnished them with ammunition, cared for their horses, permitted them to eat at their tables and sleep in their beds. These facts were well known to the community, although a conviction on the charge of harboring or aiding and abetting criminals against the laws of the United States could never be sustained by reason of the fact that the entire community was under duress and would not testify for fear of losing their lives and property.

On September 1, 1893, a party of U.S. Deputy Marshals who had been sent after these outlaws by me arrived in the vicinity of Ingalls, and the outlaws mentioned herein were at the time in the town and in the saloon of Ransom, where this man Murray worked. As usual, the outlaws had received notice of the proximity of the deputies, and they sent a messenger to the deputies inviting them to come into the town if they thought they, the deputies, could take them. The deputies accepted the invitation and, after posting their forces, sent a messenger to the outlaws with a request to surrender and were answered with Winchester shots. “Bitter Creek” ran out of the saloon in question and fired one shot towards the north where some of the deputies were stationed, and turning, received the fire of the deputies, which burst the magazine of his Winchester and wounded him in the thigh. In the meantime, a heavy fire was directed at the deputies by the balance of the outlaws from the saloon building, and the fire was returned by the deputies, which literally riddled the saloon. A horse was killed by the deputies which was tied in front of the saloon… The fire of the deputies becoming too hot for the outlaws, they escaped out of a side door and took refuge in a large stable mentioned. This man Murray came to the front door of the saloon either just before the outlaws left the building or just after, it is known which. However, when he first appeared in the doorway, he had the door open just a short distance and had his Winchester to his shoulder in the act of firing. This was previous to the deputies becoming aware of the fact of the outlaws had left the building. Three of the deputies seeing him in the position he was in, fired at him simultaneously. Two shots struck him in the ribs and one broke his arm in two places.

Eight or ten horses were killed and nine persons killed and wounded. One deputy was killed outright at the first fire and two more died the next day. Three outlaws were wounded and one captured. The one captured was afterward sentenced to fifty years in the penitentiary and is now serving his time. 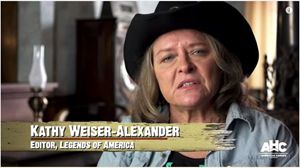