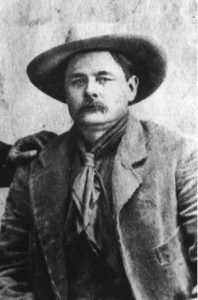 Though Robert “Bob” Olinger was a lawman, he was actually better known as a killer with a penchant for fighting in range wars.

Born Robert Ameridth Olinger about 1841, he moved with his family from Ohio to Oklahoma when he was just a boy. After he grew up, he made his way to New Mexico.

In 1876 he was named marshal of Seven Rivers in Lincoln County, New Mexico. However, the job was short-lived as he was soon fired when he was suspected of consorting with an outlaw band. Unfortunately, this would be the “norm” for Olinger, as his love of gambling and drinking often placed him in bad company.

The first man known to have been killed by Olinger was a Mexican named Juan Chavez. The two were friends and had no history of violence between them and played poker in the Royal Saloon in Seven Rivers. However, when Chavez accused Olinger of cheating, Bob stood up and leveled his six-shooter at his friend’s head. Another player then tossed the unarmed Chavez and gun, and the two exchanged shots. When the smoke cleared, Chavez lay dead on the floor with a bullet in his throat.  Without remorse, Olinger looked at him, stating “All’s well that end’s well,” before he strode out the door.

The second man Olinger killed also involved gambling. When he and a man named John Hill were playing poker at Diamond Lil’s casino and dance hall, Olinger quickly won Hill’s money. Afterward, Hill loudly stated that he had been “hornswoggled,” implying that Olinger had tricked or cheated him. Though initially, Olinger did nothing, when Hill left the saloon later that night, Olinger shot him dead.

In February 1878, when the Lincoln County War erupted, Olinger was right in its midst, working with the Seven Rivers Warriors. When the Dolan-Murphy faction obtained a court order to seize some of John Tunstall’s horses as payment for an outstanding debt, and Tunstall refused, Lincoln County Sheriff, William Brady, formed a posse to go after Tunstall. In this group was Bob Olinger, as a Dolan-Murphy “hired gun.”  Rather than arresting Tunstall; however, the unarmed man was killed on February 18, 1878. Although several riders participated in the murder, only James Dolan and Jacob “Billy” Matthews were charged with being accessories to murder.

In the end, Olinger’s participation in the Lincoln County War would be a fatal mistake, as Tunstall supporter Billy the Kid avowed: “I’ll get every son-of-a-bitch who helped kill John if it’s the last thing I do.”

Seemingly, as time went on, each of Olinger’s killings got a little worse. The next year, when Olinger was playing poker with a man named Bob Jones, yet another gambling dispute arose. Jones, who had heard of Olinger’s reputation, wisely avoided the killer.

However, Olinger saw a chance to even the score when he found that Deputy Pierce Jones had a misdemeanor warrant to serve on Bob Jones. So Olinger decided to tag along, and when they arrived at Bob Jones home. Jones was working in the yard while his three children played, and his wife was in the kitchen.

Offering no resistance, Bob asked the deputy if he could explain to his wife that he would return as soon as he paid his fine. The deputy agreed, and Bob made his way into the house, passing by his hunting gun lying on the porch. Though Bob Jones did not attempt to pick up the rifle, Olinger drew a pistol and fired three shots into Bob’s back. As Jones’ wife and children stood by screaming and Deputy Pierce Jones was shocked, Olinger was smug in his belief that he could claim self-defense for the outright murder.

Deputy Jones quickly brought murder charges against Olinger, and Lincoln County authorities issued a warrant for his arrest. Sheriff George Kimball arrested him and brought him to Lincoln for trial in October 1879. However, for unknown reasons, the case was dismissed without going to court.

That very same month, Pat Garrett was elected Sheriff of Lincoln County. Amazingly, Olinger was appointed his deputy, much to Garrett’s chagrin. Aware of Olinger’s violent tendencies, he would begin to see them first-hand. On one occasion when the pair when to arrest an armed Mexican, Garrett promised the fugitive, who had taken cover in a ditch, that he would not be harmed if he came in. However, as the man came forward with his hands in the air, Olinger drew his pistol as if to shoot him. The man was saved by Garrett, who placed himself in between, saying to Olinger: “Put it away, Bob. Unless you want to try me.”

When a price was put on Billy the Kid’s head and Pat Garrett determined to track him down, the swaggering Olinger hoped that it would be he that might kill the famous outlaw. In December 1880 Billy the Kid, Dave Rudabaugh, Tom Pickett, and Bill Wilson were tracked down by Pat Garrett and taken to Santa Fe, New Mexico.

After Billy was convicted, he was then sent to Lincoln to await his execution, scheduled for May 13, 1881. Olinger, along with several other men, was assigned to escort the Kid back to Lincoln. Along the way, Olinger constantly tormented Billy, so much so, that even the other guards had some sympathy for the outlaw. To this, Billy said to the deputy, “Be careful, Bob; I’m not hung yet.” Though Olinger, no doubt, looked for opportunities to kill the Kid on the way to Lincoln, the party arrived without incident.

Placed in the county jail, Olinger continued to taunt Billy to the point that Garrett told him to “lay off the Kid.” On one occasion, the shifty lawman even went so far as to place a pistol on a table within Billy’s reach, but the Kid was too smart to take the bait.

On April 28th, Garrett was out of town on business and Billy was left in the hands of Deputies James Bell and Olinger. While Olinger took several other prisoners to the Worthy Hotel a block away for their daily meal, Bell remained with Billy the Kid. Somehow, Billy had obtained a pistol and shot Bell. He then stole Olinger’s 10-gauge double-barrel shotgun and waited for the deputy by the window in the room he was being held in. Olinger obliged by running immediately from the hotel upon hearing the shots.

When he was directly under the window of the courthouse, he heard his prisoner say, “Hello, Bob.” Olinger then looked up and saw the Kid, gun in hand. It was the last thing he ever saw as Billy blasted him with his own shotgun killing him instantly.

The bodies of deputies Olinger and Bell were placed in a room in the corral behind the courthouse and remained there until Garrett’s return. Garrett swore to make Billy pay, and he did when he killed the infamous outlaw on July 14, 1881.

Hiding behind a badge for much of his life, Olinger was a killer worse than the likes of most outlaws. Even his own mother would remember him by saying:

“Bob was a murderer from the cradle, and if there is a hell hereafter then he is there.”