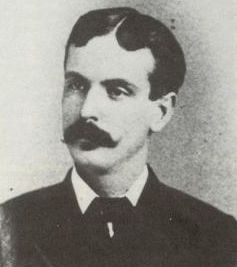 Bass (Baz) L. Outlaw was a lawman, gunfighter, and Texas Ranger during the days of the American West.

Bass Outlaw was born in 1854 to Meshack Napoleon and MaryAnn Elizabeth Smith Outlaw in Lee County, Georgia. Fron a good family, Bass grew up to be a refined gentleman, but he had a serious drinking problem that continually got him into trouble. After he allegedly killed a man in Georgia around 1884, Bass, also known as Baz, fled to Texas where he became a Texas Ranger. He was soon promoted to a sergeant but, when discovered drunk on duty in Alpine, Texas, he was dismissed.

On April 5, 1894, when Baz was in El Paso, Texas, he got drunk and fired a shot into Tillie Howard’s brothel. When challenged by Constable John Selman and Texas Ranger Joe McKidrict, Baz pointed his gun at the two men, shooting McKidrict’s in the head. He then shot at Selman, missing but almost blinding the constable with the gun powder blast. Selman quickly returned fire and shot Outlaw in the chest. Staggering back, Baz fired twice more, wounding Selman, before he stumbled to the ground. Surrendering, Outlaw was led to a nearby saloon where he collapsed and died four hours later. (Also See an excerpt of the book “Whiskey River Ranger: The Old West Life of Baz Outlaw” HERE