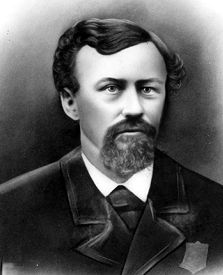 Earning a reputation as one of the most prolific buffalo hunters in the American West, Tom Nixon once shot 120 buffalo in just 40 minutes in 1873, an event that was witnessed by a crowd he brought from town and positioned on a hill to watch. That same year, he set a record for killing over 3,200 buffalo in just 35 days.

Thomas Clayton Nixon was born about 1837 in Georgia but somewhere along the line moved westward, landing in Kansas. He was one of the first pioneers of Dodge City, and by the 1870’s he was a successful buffalo hunter as well as a ranch owner. With the likes of Bat Masterson, Bill Tilghman, and Levi Richardson, Nixon honed his skills as a buffalo hunter, besting all but Buffalo Bill Cody. He married Cornelia Caroline Houston about 1870, and the two would have a son they named Howard Tracy Nixon.

By 1880, the buffalo were not as prevalent, and Nixon turned to freighting, in charge of Charles Rath’s bull trains. Often loaded with thousands of pounds of buffalo bones, Rath’s hide yards in Dodge were now filled with huge piles of bleached bones rather than buffalo hides.

In the spring of 1883, Dodge City was embroiled in the so-called Dodge City War, a dispute between saloon owners who were friends of Dodge City’s former Mayor, Alonzo B. Webster, and Luke Short, owner of the Long Branch Saloon. In the midst of this dispute was Tom Nixon, who was one of Webster’s supporters and, by that time, owned his own saloon called the Lady Gay. While he was mayor, Webster passed ordinances that protected his own two saloons and those of his friends while establishing rules restricting competing saloons and levying taxes upon them. Nixon led a vigilante group to “force” Webster’s rules and to run competing saloon owners out of town. 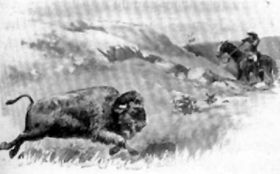 Into this mix came “Mysterious Dave” Mather, who had frequently made Dodge City his home in previous years. He soon became Dodge City’s Assistant Marshal.

When Luke Short pulled in several of his friends to support him in the Dodge City War, including Bat Masterson and Wyatt Earp, the show of force caused Short’s enemies to back down, and violence was avoided. Though the Dodge City War had ended without gunfire, and the city breathed a sigh of relief, the saloon dispute had not ended. Ironically, after winning his battle, Luke Short moved to Texas. But, in his wake, the disputes continued.

Mather, in the meantime, had established his own saloon called the Opera House Saloon and planned to make it a dance hall. However, because of its prominent downtown location, the city council objected to Mather’s decision and soon passed an ordinance banning all dance houses. Ironically, the ordinance restricted all the saloons except Tom Nixon’s Lady Gay. For months, Nixon and Mather battled to put each other out of business. In 1884, the city government replaced Mysterious Dave with Tom Nixon as the Assistant Marshal, and the feud that had been brewing for several months came to a head. Mather’s resentment toward Nixon obviously grew.

In the meantime, Nixon was collecting $100 per month as the assistant marshal under Bill Tilghman. The lawmens’ wages were paid by collecting license fees from the city’s gamblers, prostitutes, madams, and pimps. The Lady Gay was the only dance hall left in town and Webster was profiting from his own saloons while controlling the action and profits in the city.

Though Mather was most resentful, tension for Tom Nixon evidently came to a boil on the night of July 18, 1884. As Mather was standing on the Opera House Saloon’s front steps, Nixon shot him. Although Mather’s face was powder burned and his left hand injured by flying splinters, he did not return the fire and refused to press charges. Evidently, he had his own plans for handling the affair.

Three nights later, on July 21, Tom Nixon was standing at the corner of First Avenue and Front Street in front of the Opera House at about 10 p.m. When Nixon heard a voice calling out to him from behind, he turned to see Mather pointing a Colt .45 at him. Within seconds, Nixon took four bullets, one piercing his heart, and he was dead before he hit the ground.

Mather then surrendered himself to authorities, and though witnesses said that Nixon never drew his pistol, Mather was acquitted for self-defense. Later, Mather was heard to say, “I ought to have killed him six months ago.”

After the trial, Mather remained in Dodge until the following year. On May 10, 1885, however, he and his brother Josiah were involved in a gunfight at the Junction Saloon. One man was killed, and several were wounded, including Mather, whose head was grazed by a bullet. Both Dave and his brother Josiah were arrested but soon made bail and left town.