The Butterfield Overland Despatch was a mail and freight service operating across the Great Plains in the 1860s.

After the discovery of gold in Colorado in 1858, many people set out across the Kansas Territory to the goldfields at Cherry Creek near present-day Denver, Colorado. In 1859, freight line operator Russell, Majors, and Waddell, who operated the Leavenworth and Pike’s Peak Express, financed William Russell of their firm along with John S. Jones to establish a shorter, more direct middle route from Leavenworth along the Kansas River to the Smoky Hill River, and on to the goldfields by way of the Republican and Solomon Rivers.

In early 1860, William Russell led a crew of men to scout a good route along the Smoky Hill River with adequate water and grass. The tabling of a Kansas bill for statehood dashed hopes for a government-backed route along the Smoky Hill River. Towns and settlements along and near the proposed road, such as Topeka, Junction City, Manhattan, and Ogden, put up money and livestock to finance a road-building crew, who reported encouraging progress in building the road to the Rocky Mountains. Kansas was admitted to the Union on January 29, 1861, but the Civil War soon began, and as eastern Kansas counties funded militia to protect their interests and homes, there was no money to be spared to continue to develop the route. 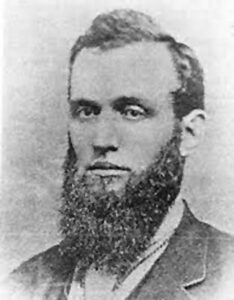 In 1862, Atchison, Kansas resident, and entrepreneur David A. Butterfield moved his family west to the newly established mining town of Denver in western Kansas Territory. He returned to Atchison in 1864 with dreams of establishing a more direct overland route than the Arkansas and Platt River routes. That year, he commissioned a survey of a direct route between Atchison and Denver in advance of launching a fast freight and stagecoach line through Kansas. The survey expedition was commanded by Major James B. Pond, who with four companies of the third Wisconsin Cavalry and two companies of the Thirteenth Missouri Cavalry, Colonel Isaac Eaton, surveyor Lieutenant Julian Fitch, and others, reported favorably that the Smoky Hill River road provided access to water and grass for animals and was safe. Eaton and Fitch generally are attributed to completing the Fitch Survey in 1865. Fitch had been part of the team that had surveyed the Smoky Hill Trail in 1860.

David A. Butterfield, backed by New York capital, organized a joint-stock express and passenger-carrying service between the Missouri River and Denver, Colorado. Managing to raise the astounding sum of a rumored $6 million, he spent a million dollars on horses, mules, and oxen, outfitting his wagons and coaches, hiring drivers, and surveying the route. Butterfield established his Butterfield Overland Despatch in  1865, hauling freight and passengers from Atchison to Denver, following the Smoky Hill River on its north side.

David Butterfield’s Overland Despatch competed directly with Holladay Overland Mail and Express Company. Though other trails had been blazed in the Smoky Hill Valley of Kansas, stage lines had not been successful due to a scarcity of water and frequent Indian attacks. However, David Butterfield was determined that it could be profitable. The smooth-talking businessman soon obtained capital for the “Butterfield Overland Despatch.” The first stage left Atchison, Kansas, on June 4, 1865, arriving in Denver, Colorado, on September 23.

Along the 592-mile-long route, relay stations were built about every 12 miles for passengers’ rest, food, and changing of horses. The line was an initial success, providing tri-weekly express service between Atchison, Kansas, and Denver, Colorado, in only 8-12 days.

Soldiers were also posted along the pathway at Fort Downer, Fort Harker, Fort Monument, Fort Wallace, and other stops to protect the stations and travelers from Indian attacks. However, the soldiers could not keep up with the furious Indians who felt their land was being invaded. Additionally, these “Indians” were not always as they appeared but were allegedly Ben Holladay’s hired men dressed in Indian attire, who frightened those on the coaches, robbed them, and burned their equipment and supplies. 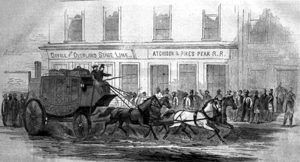 By January 1866, David Butterfield’s Overland Despatch was in serious financial trouble, and the company was reorganized, with David Bray becoming the president. However, it was too little too late, as just two months later, they sold the line to their competitor, Ben Holladay. Later that year, Holladay sold it to Wells Fargo. During this time, the Kansas Pacific Railroad was also pushing towards Denver, and by 1870, the stage line was no longer needed.