In my last epistle, I gave an account of the murder of several persons along the Smoky Hill route, and depredations of various kinds by a band of Indians, supposed to be Cheyenne, under the lead of one of their chiefs rejoicing in the soubriquet of “Fast Bear.” We, that is the Butterfield Overland Dispatch coach, containing General Brewster and several passengers, left Chalk Bluff Station with an escort of cavalry on the 23rd, arriving without adventure at Monument Station the same evening. At Monument there is a military post, so we considered our case a safe one.

A large wagon train with an escort of Infantry was also at this point en route to Pond Creek, a military post some twenty-five miles west of our present position.

We left Monument yesterday morning to continue our journey to Denver, accompanied by an ambulance, in which was Surgeon N.L. Whipple, who had been to Chalk Bluff to care for the soldiers wounded at that place in repelling an attack made by Indians a few days since.

Colonel Tamblyn seemed to think that there was so little danger that we felt very safe with an escort of eight men, three in the ambulance with the doctor, and five mounted men riding in advance of the coach.

We saw no sign of the presence of Indians during the morning and had nearly reached the station when the ambulance driver took a shortcut which did not pass the station but joined the main road a mile beyond it.

When within fifteen hundred yards of the station, Mr. Davis, of Harper’s Weekly, discovered that a squad of Indians were charging down on us. He at once gave the alarm and opened on the redskins with his Ballard rifle, which performance was immediately initiated by General Brewster, Mr. Hasbrock and Your Own, Mr. Perrin doing duty his revolver from the outside of the coach.

As were all armed with Ballard guns, we drove the party off quite as fast as they came, two of them bearing tokens of our regard in the shape of curiously shaped cones of lead.

The driver of our coach was not wanting in pluck but quickly drove his team to the station.

We left the coach at once and discovered that another party of Indians had rushed in among the horses and mules that were grazing near, stampeding them.

One of the stock-tenders had started at the first alarm to gather the mules that were grazing near the station; one of the Indians discovered him and gave chase, just we got out of the coach. Mr. Davis discovered him and started with his rifle to help the stock-tender. The Indian drove an arrow at the herder, fortunately missing him, when a bullet from Mr. Davis’ rifle, ended the little performance and the Indian at the same moment.

The stock-tender was saved, but the stock was gone, and with it five horses belonging to the cavalry stationed at this point. The garrison consisted of ten men of the Thirteenth Missouri Cavalry. Five of the men were away on a buffalo hunt, so saved their steeds.

We were congratulating ourselves on our escape, when we thought of the Doctor and his ambulance, and saw at the same moment some fifteen or twenty Indians in hot pursuit of the vehicle, which was being rushed along at a tremendous speed by the frightened mules.

The chase was exciting; entirely out of our power to render any assistance. We dispatched our four cavalrymen to help the fugitives if possible. The cavalrymen had gained a little crest a half a mile distant when we saw the men from the ambulance running toward them; then we knew that they were safe. The Doctor tells the story, thus: “I had just left you when I thought that it might be a little imprudent, but kept on. We were so near the station and there were no signs of the Indians. But this state of affairs was changed by a number of the red ni**ers coming yelling after us, frightening the mules so that we could not turn them back toward the station. As soon as the scoundrels got near enough they opened on the ambulance with their revolvers, we saving our few shots until they were right on us, when we fired on them.

This had the desired effect, but only for a short time, when after us they came again. Seeing that it was impossible to escape if we did not take this moment, we now left the ambulance and ran toward the four men that we saw leave the station to help us.

The Indians at once gave chase, and for a short time made our run very interesting. But when we got tired running, we turned on them; fired a few shots at the gentlemen, and they would stop, so would we, but only take a breath and start again. We caught the four men, mounted behind them, and came to the station. That’s the case as near as I remember it,” said the Doctor, “for I was in a slightly mixed state after we left the ambulance.” While this chase was going on we were watching the Indians. The moment of the first attack seemed a signal for Indians to start from every hillside, and from every point of the compass, at the same time. That we were surrounded there was no doubt. So our next thought was how to defend ourselves from attack. 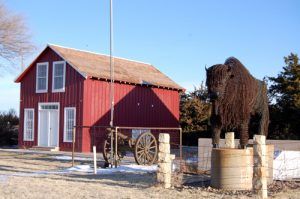 The soldiers garrisoning the station had dug into the side of the hill and built a sort of bomb-proof, with a covered way dug around it for a rifle-pit. This was to be our fortress and a good one too. Upon the arrival of the Doctor and his squad we found that we numbered twenty-one persons, variously armed.

If there had been any horses we could have mounted them and made an attack on the Indians, and certainly should have done so, when we saw the ambulance driven toward us with a cargo of red-skins busily engaged in “going through” its contents. But what could men on foot do with mounted Indians? Certainly not catch them. Then when we moved toward them to get within rifle-shot they left.

The ambulance was taken into a ravine a little more than a mile from us and set on fire. At the same time, some of the red devils set fire to the prairie and nearly succeeded in their effort at burning us out.

A sort of council of war was held and the decision arrived at, that we could whip the Indians if we kept together. Our anxiety was for the five men who were out hunting, and a careful watch was kept for them, to move toward them, if we saw them approaching, so that the Indians could not fight them unaided.

The men on the watch soon discovered a small body of mounted men moving toward us, who we were sure was the returning buffalo hunters. But while they were far in the distance the Indians discovered them too and gave chase at once. The small squad that we thought to be our men went scampering off over the hills in the direction of the next station west (Eaton Springs.)