“A house is never silent in darkness to those who listen intently; there is a whispering in distant chambers, and earthly hand presses the snib of the window, the latch rises. Ghosts were created when the first man woke in the night.”

Atchison, Kansas is proclaimed to be the most haunted town in Kansas, so much so that a haunted homes tour is available on the Atchison Trolley. This old town once played host to over 1600 wagons per day as settlers made their way west en route to the goldfields of California in the 1850s. Some of these early settlers have apparently chosen to stay in Atchison in a ghostly form. The town is full of stories about ghostly sightings and other paranormal events.

Located in northeast Kansas, Atchison is situated on the bluffs along the Missouri River and is one of the most scenic and historic towns in Kansas. Brick streets climb hills and wind along river bluffs, offering sweeping views of the river valley beyond. Grand Victorian homes with carriage houses recall glorious days when wealthy lumber merchants and railroad magnates walked the streets.

The town of Atchison is so haunted that the Travel Channel has done a special segment called Haunted Town that depicts many of the haunted places in Atchison, including Sallie’s House, Benedictine College, and more.

Atchison Street – This road, once known as Ferry Street, travels down a steep hill toward the Missouri River. Long ago locals would board the ferry at the landing at the bottom of the hill. When it was still referred to as Ferry Street, a woman traveling down the road in a buggy lost control of her horses, became unhitched from the animals and plummeted down the street into the freezing river. Trapped inside, her drowned body was never recovered. Today, men walking along the riverbank have heard a woman calling them to join her in the murky water below. 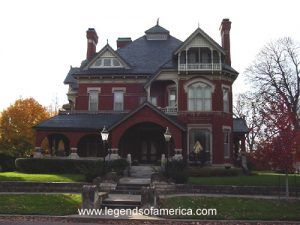 Gargoyle Home, 819 N. 4th Street –  More often referred to as the Waggener House, this turn-of-the-century home was built in 1884-1885 by B.P. Waggener, who was a lawyer and politician in the Atchison area in the late 1800s. While gargoyles are usually erected to scare off evil spirits, legend has it that Waggener accumulated his wealth through a deal with the devil and the gargoyles were constructed in honor of the pact. It is said that the house is afflicted by an evil curse. One homeowner, who attempted to remove the gargoyles, fell to his death on the staircase. A segment on the Travel Channel reported that Kansas City Ghost Hunters while visiting the home, picked up the presence of ghosts on their special equipment and reported having felt a presence in the house. This house was placed on the National Register of Historic Places on May 3, 1974, and is located at 819 N. 4th Street. 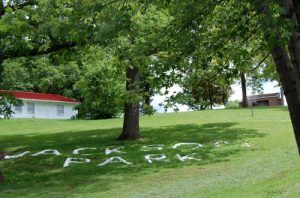 Jackson Park – A woman by the name of “Molly” is said to haunt this park. Supposedly, moaning and terrifying screams can be heard throughout the park around midnight. According to one legend, Molly was a beautiful young woman who was found dead in the park the day after her prom. She was found hanging by her neck to a park tree in a hollow with her clothes badly torn. Allegedly, she and her date had argued the night before and when Molly exited the car, her date drove off leaving her in the park. It was never determined if her death was by her own hand or was a murder. Though some suspected that her prom date killed her, no one was ever charged.

Another legend of the park’s haunting states that Molly was a black woman who was lynched by a white mob years ago. Rather than the eerie screams of a young prom girl, the cries instead come from the brutal slaying of an African-American Molly. In any case, the area today is known as Molly’s Hollow where couples go to “park.” In addition to Molly’s chilling cries, many witnesses also claim to have seen a ghostly figure hanging in the tree where her body was discovered. 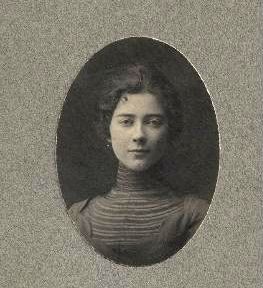 North 3rd Street Home – This home was once inhabited by an elderly, single schoolteacher named Nellie Trueblood. Legends told say companionless and bereft she died in the house. When the house was sold, the new owners began to make renovations, evidently to Nellie’s chagrin. It is said that when crews are working within the house they report seeing gleaming balls of light measuring 18-24 inches, which hover just out of reach. If approached, the lights quickly move away. Frightened the work crews quickly abandon the project before the restorations are ever completed.

We heard from Nellie’s Nephew, Scott Neilson from Denver Colorado in 2012.  Neilson says that his Aunt was far from bereft, and that she actually died at the Atchison Hospital in 1958.  Neilson added though “I’m not surprised to hear Nellie may haunt the 3rd. St. home. But that haunting would not be at all negative, beyond a possible desire for the old home to remain as it always was. She came from a large family and there was a lot of love in that old home.”

Riverview Drive Home  – Several strange occurrences have been reported in this house such as the television and stereo mysteriously turning on at full volume and noises from rooms where no one is occupying. On one such occasion, the resident thought the noise was her dog and called out to him. However, instead of the dog responding to her call, an elderly woman’s ghostly spirit entered the room. Wrapped in a shroud, the spirit smoothed a place on the bed and sat next to the resident. Screaming, the resident ran from the room to be answered by the slamming of the attic door behind her. Another strange experience has occurred to several guests who have stayed within the house. Apparently, when guests stay in this home they are instructed to place their luggage at a space at the top of the stairs, which leads to the attic.  However, the spirit seemingly doesn’t like the suitcases stored in this area because the luggage is often found tossed to the bottom of the stairs.

Kearny & 5th Street Home – According to the former owners of this house, a friendly ghost lingers here. While there are many unexplained events, such as the sounds of someone walking throughout the house, this ghost is seemingly very helpful. At one point, the ghost helped the man of the house into his dinner jacket. Thinking his wife had helped him he turned around to thank her, but no one was there. On another occasion, when the couple was returning home from a trip, the wife mentioned that she would love to have a cup of tea when she got home. Upon their arrival home, a teakettle was hissing and a cup, saucer, tea bag, and spoon were sitting on the counter.

Riverview Drive & R Street Home – When this home was purchased by the current owners, it came completely furnished including several paintings on the wall. Making changes to their new home, the new owners removed several of the paintings, wrapped them carefully, then placed them in the basement for storage. However, the very next day, every single painting was back in its original location.