Kansas entered the Union as the 34th state on January 29, 1861. Less than three months later, on April 12, Fort Sumter, South Carolina, was attacked by Confederate troops, and the Civil War began.

But, long before the “official” Civil War began, the people of Kansas had been fighting for seven years over the issue of slavery, beginning when the territory was opened in 1854. Referred to as “Bleeding Kansas,” or the Kansas-Missouri Border War, the conflict began immediately after signing the Kansas-Nebraska Act in 1854. This border war between the people of Kansas and Missouri was fought over the issue was whether or not Kansas would become a Free-State or a pro-slavery state, which resulted in years of electoral fraud, raids, assaults, and retributive murders carried out by pro-slavery “Border Ruffians” in Missouri and anti-slavery “Jayhawkers” and “Redlegs” in Kansas.

After President Abraham Lincoln called for troops on May 8, 1861, the first infantry was organized and mustered into the U.S. service at Leavenworth, Kansas, on June 3. During the war, Kansas furnished more troops to the Union army than any other loyal state in proportion to population. This is not surprising, as most of the pioneers were nurtured in an atmosphere that opposed slavery. Under all calls for volunteers from April 15, 1861, to December 19, 1864, the quota of Kansas was 16,654 men, while she furnished 20,097. These volunteers were divided into seven regiments of infantry, nine of cavalry, and three batteries of light artillery. In addition to these organizations, there were two regiments of colored infantry and an independent colored battery accredited to the state. 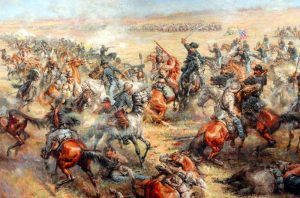 Battle of Mine Creek, Kansas

Jayhawkers and Bushwackers fight over Kansas becoming a free state or a pro-slavery state.