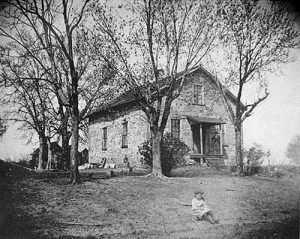 Almost immediately after the Battle of Black Jack, Kansas bands of both pro-slavery and Free-State men began to concentrate toward Franklin, the Wakarusa, Hickory Point, and Bull Creek on the Shawnee Reserve. Franklin had not been entirely abandoned by the pro-slavery forces since the Sacking of Lawrence.

Buford’s men and several Missourians were assembled there, with a brass 6-pounder, a large quantity of ammunition, and other camp supplies taken at Lawrence. The plunder taken from intercepted wagons had also been stored there. The pro-slavery forces used the town as a rallying point when they invaded from Missouri.

To recapture the stolen property, secure the ammunition, and break up the enemy’s stronghold, who would have Lawrence at their mercy if the free-state forces were called to support Brown, an attack was planned upon Franklin by the free-state men in the vicinity of Lawrence.

The plan of attack was poorly worked out, and as a result, there was no concerted action. About 16 men left Lawrence on the night of June 4 for Franklin. The plan was to have the Wakarusa Company attack on one side and the Lawrence party on the other. Failing to find the Wakarusa Company at the place agreed upon, the men from Lawrence entered the town about 2 a.m. and went to the place where they supposed the cannon to be to capture it and the ammunition, but the cannon was not to be found. In fact, nothing was found where it was supposed to be, and for nearly an hour, the Lawrence men hunted about the town before the real operations commenced. By this time, the pro-slavery men were awake and prepared.

Finally, the free-state men marched to the guardhouse and demanded the garrison’s surrender. The garrison had been warned of the approach of the free-state men, refused to surrender, and fired a volley of rifle shots. The free-state men returned this, and then the cannon, which had been placed just inside the guard-house door, was fired. It had been loaded with nails, broken scrap iron, etc., which went screaming through the darkness, but the aim was poor, and no one was hurt. The firing on both sides continued, and pro-slavery men in other houses began to open fire on the attacking party, which did not desire to assail anything but the guardhouse. The Wakarusa Company, which had lost its way in the darkness, was guided by the sound of the firing and found its way into Franklin, but not knowing friend from foe, was unable to take any active part in the engagement. The men knew, however, that Buford had most of his stores in a place near where they entered the town. They broke into the storehouse and obtained a large quantity of ammunition, some Sharpe’s rifles, and a few of the guns that had been seized from the free-state men. All kinds of provisions were stored in this house in case of need. Many of these were loaded into a wagon and hurried away. Several wagons could have been loaded had the Wakarusa men had them.

As the day began to break, the firing in the streets ceased. The free-state men feared the approach of the United States troops in camp near Lawrence and were forced to leave Franklin without taking the cannon they had captured with them. Only one free-state man was hurt during the fight, while four of the opposite side were severely wounded, one of whom died a few days later. Although it had not been carried out as planned, the expedition was not an entire failure, for supplies had been secured, and the pro-slavery party taught that the free-state men could strike back.

About the Article: This historic text was published in Kansas: A Cyclopedia of State History, Volume I; edited by Frank W. Blackmar,  A.M. Ph. D.; Standard Publishing Company, Chicago, IL 1912. The text is not necessarily verbatim, as we have edited it for readability, errors, and other corrections.