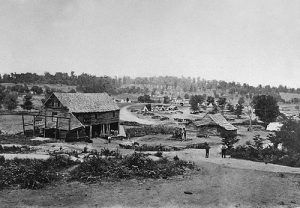 Fort Saunders, Kansas, was a pro-slavery stronghold during the Kansas-Missouri Border War. The fort, which was nothing more than a well-built log cabin located on Washington Creek about 12 miles southwest of Lawrence, was established in 1855.

The stronghold belonged to a pro-slavery settler named Saunders, and in the summer of 1856, it became the rendezvous point and headquarters of pro-slavery men under the leadership of Colonel Treadwell, who was engaged in plundering and harassing the Free-State settlers. Saunders had a corn crusher, and on August 11, 1856, Major David S. Hoyt, a Free-State man, made an excuse to visit the fort to get a sack of corn crushed, but at the same time to see if some arrangement could not be reached with Colonel Treadwell to stop the depredations of his gang. Hoyt was regarded as a spy, and on his return, he was brutally murdered.

Appeals to the United States troops to break up the rendezvous were made in vain, the commanding officers saying they could not act without orders, and these the territorial authorities refused to issue. After the murder of Hoyt, the citizens took matters into their own hands. On August 15th, a body of Free-State men, under the command of James Lane and Joel Grover, advanced upon the fort, but their movement was discovered, and Treadwell and his men fled. Fort Saunders was then burned to the ground.