About the Article: The Lawrence Massacre is based on a letter written by Reverend Richard Cordley, pastor of the Congregational Church and eye witness to Quantrill’s Raid on Lawrence, Kansas in 1863. The contents were then published by J.S. Broughton of Lawrence, Kansas in 1865. From the Kansas Collection of Kenneth Spencer Research Library and the Department of History of the University of Kansas. The electronic copy was prepared by Mr. Alec Miller. Lawrence, Kansas, 30 June 1994.

It is a fact not generally known that no complete account of this massacre has ever been published. The letter furnished by Reverend R. Cordley to the Congressional Record a few days after the event and before all the facts and incidents had become known, and which was republished in Boughton & McAllister’s Directory of Lawrence 1865, is about all the literature we can find in regard to it.

Mr. Cordley’s letter is made the basis of this history, to which is added the personal experience and observations of a number of residents who providentially escaped the general slaughter and who now recall the terrible events of those few hours as though they occurred yesterday.

We would like to give the personal experience of every one of the survivors and especially record in detail the deeds of heroism enacted by the brave women of Lawrence who in that fearful hour saved many a precious life and extinguished the flames in nearly a hundred burning dwellings. But volumes would be required for such an undertaking.

The destruction of Lawrence had no doubt been long contemplated by the rebels of the border. Ever since the war had commenced rumors had been constantly circulating of the maturing of such a purpose. Each rumor called forth efforts for defense. The people had become so accustomed to alarms as to be almost unaffected by them. At several times the prospect had been absolutely threatening. This was especially the case after the battle of Springfield, Missouri and again after the capture of Lexington, Missouri by the rebels. The people had never felt more secure than for a few months preceding the raid of August 1863. The power of the rebellion was broken in Missouri, and the Federal force on the border, while it could prevent depravations by small gangs, seemed to be sufficiently vigilant to prevent the gathering of any large force. No rumors of danger had been received for several months.

Still, many of the citizens did not feel that the place was entirely safe. Mayor Collamore, early in the summer, prevailed upon the military authorities to station a squad of soldiers in Lawrence. These soldiers were under the command of Lieutenant Hadley, a very efficient officer. Lieutenant Hadley had a brother on General Ewing’s staff. About the first of August, this brother wrote him that his spies had been in William Quantrill’s camp, had mingled freely with his men, and had learned from Quantrill’s clerk, that they proposed to make a raid on Lawrence about the full of the moon, which would be three weeks before the actual raid. He told his brother to do all he could for the defense of the town, to fight them to the last, and never be taken prisoner, for Quantrill killed all prisoners. Lieutenant Hadley showed the letter to Mayor Collamore, who, at once, set about the work of putting the town in a state of defense. The militia was called out, pickets detailed, the cannon got in readiness, and the country warned.

Guerilla Raid during the Civil War in Missouri by Thomas Nast, 1862.

Had Quantrill’s gang come according to promise, they would have been “welcomed with bloody hands and hospitable graves.” Someone asked Quantrill, when in Lawrence, why he did not come before when he said he would. He replied, “You were expecting me then but I have caught you napping now.”

It may be asked, why the people of Lawrence relaxed their vigilance so soon after receiving such authentic evidence of Quantrill’s intentions? The city and military authorities made the fatal mistake of keeping the ground of apprehension a profound secret. Nobody knew the reason for the preparations. Rumors were afloat, but they could not be traced to any reliable source. Companies came in from the country, but could not ascertain why they were sent for and went home to be laughed at by their neighbors. Unable to find any ground of alarm, people soon began to think that the rumors were like the other false alarms by which they had been periodically disturbed for the last two years. The course of the military authorities tended to strengthen this view.

Mayor Collamore sent to Fort Leavenworth for cannon and troops. They were at once sent over but were met at Lawrence by a dispatch from Kansas City, ordering them back. A few days after, the squad of soldiers under Lieutenant Hadley was ordered away. It was evident, therefore, that the military authorities at Kansas City, who ought to know, did not consider the place in danger.

The usual sense of security soon returned. Citizens were assured that Quantrill could not penetrate the military line on the border without detection. They felt sure, too, that he could not travel fifty miles through a loyal county without their being informed of the approach of danger. The people never felt more secure and were never less prepared, than the night before the raid. 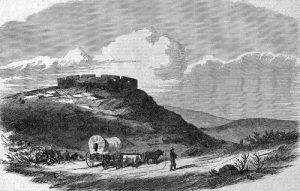 Quantrill assembled his gang about noon the day before the raid and started towards Kansas about two o’clock. They crossed the border between five and six o’clock and struck directly across the prairie toward Lawrence. He passed through Gardner, on the old Santa Fe wagon road, about 11 o’clock at night. Here, they burned a few houses and killed one or two citizens. The passed through Hesper, ten miles southeast of Lawrence, between two and three o’clock. The moon was now down and the night was very dark and the road doubtful. They took a little boy from a house on Captain’s Creek, nearby, and compelled him to guide them into Lawrence. They kept the boy during their work in Lawrence, and then Quantrill dressed him in a new suit of clothes, gave him a horse and sent him home. They entered Franklin about the first glimmer of day. They passed quietly through, lying upon their horses, so as to attract as little attention as possible. The command, however, was distinctly heard, “Rush on, boys, it will be daylight before we are there! We ought to have been their an hour ago.” From here it began to grow light, and they traveled faster. When they first came in sight of the town they stopped. Many were inclined to waver. They said: “They would be cut to pieces and it was madness to go on.” Quantrill finally declared that he was going in, and they might follow who would. Two horsemen were sent ahead to see that all was quiet in town. Those horsemen rode through the town and back without attracting attention. They were seen going through the Main street, but their appearance there at that hour was nothing unusual. At the house of the Rev. S. S. Snyder, a gang turned aside from the main body, entered his yard and shot him. Mr. Snyder was a prominent minister among the United Brethren. He held a commission as lieutenant in the Second Colored Regiment, which probably accounts for their malignity. 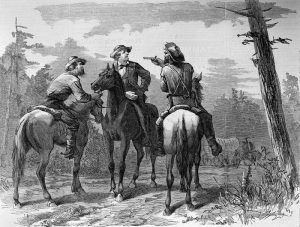 Their progress from here was quite rapid but cautious. Every now and then they checked up their horses as if fearful to proceed. They were seen approaching by several persons on the outskirts of the town, but in the dimness of the morning and the distance, they were supposed to be Union troops. They passed on in a body till they came to the high ground facing the Main street, when the command was given, “Rush on to the town!” Instantly they rushed forward with the yell of demons. The attack was perfectly planned. Every man knew his place. Detachments scattered to every section of the town, and it was done with such promptness and speed that before people could gather the meaning of their first yell, every part of the town was full of them. They flowed into every street. Eleven rushed up to Mount Oread, from which all the roads leading into town could be seen for several miles out. These were to keep watch of the country round about, least the people should gather and come in on them unawares.

Another and larger squad, struck for the west part of the town, while the main body, by two or three converging streets, made for the hotel. They first came upon a group of recruits for the Kansas Fourteenth. On these, they fired as they passed killing seventeen out of twenty-two. This attack did not in the least check the speed of the general advance. A few turned aside to run down and shoot fugitive soldiers, but the company rushed on at the command, “To the hotel!” which could be heard all over the town. In all the bloody scenes which followed, nothing equaled, in wildness and terror, that which now presented itself. The horsemanship of the guerrillas was perfect. They rode with that ease and abandon which are acquired only by a life spent in the saddle amid desperate scenes. Their horses scarcely seemed to touch the ground, and the riders, sat with bodies and arms perfectly free, with revolvers on full cock, shooting at every house and man they passed, and yelling like demons at every bound. On each side of this stream of fire, as it poured toward the street, were men falling dead and wounded, and women and children half-dressed, running and screaming, some trying to escape from danger and some rushing to the side of their murdered friends.