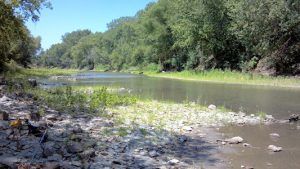 The Battle of Marais des Cygnes, Kansas, occurred on October 25, 1864, during the Civil War as part of Major General Sterling Price’s Raid into Missouri and Kansas.

Also known as the Battle of Osage and the Battle of Trading Post, this skirmish took place in Linn County, Kansas, after General Price and his men had been defeated at Westport, Missouri, on October 23. They then began to make their way toward Fort Scott with its large supply depot. Along the way, the Confederates encountered Union troops under Major General Samuel R. Curtis and Major General Alfred Pleasonton around Kansas City, Missouri. Price and his men then withdrew south into Kansas, and General Pleasanton pursued them to the Marais des Cygnes River. After an artillery bombardment that began around 4:00 am, Pleasonton’s men attacked furiously. Although outnumbered, they hit the Rebel line, forcing them to withdraw. Though unable to prevent the crossing or inflict serious damage on the Confederate forces, Pleasonton’s troopers did manage to capture prisoners and artillery. The number of casualties in the Union victory are unknown. 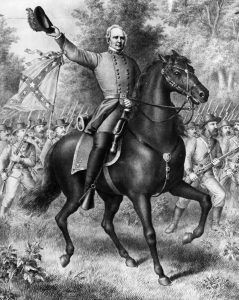 The Union troops would again pursue the Confederate troops some six miles south and engage in a more significant battle later in the day at Mine Creek. Yet a third battle would occur that day, as the Union forces followed Price and his troops into Missouri. This was the Battle of Marmiton River

Price’s campaign ended on October 28, after the Battle of Newtonia, Missouri.

Battle of Mine Creek