During the difficult days of Bleeding Kansas, when residents of Kansas were fighting over the slavery issue several years before the Civil War, the Battle of Slough Creek was fought on September 11, 1856.

Occurring about three miles north of Oskaloosa, Kansas, Colonel James A. Harvey, at the head of three small companies of Free-State men, had been sent from Lawrence as an advance force to the relief of Leavenworth free-state men, who had been driven from the town to Fort Leavenworth as a place of refuge. Harvey reached the neighborhood of Easton and Alexandria in Leavenworth County on the morning of September 10, when E. B. Whitman advised him to make no further advance on Leavenworth, as Governor John Geary had just reached the territory.

Acting on this advice, Harvey encamped about six miles east of Oskaloosa. That night Jesse Newell, the founder of Oskaloosa, came into camp with the information that a company of Carolinians was encamped a short distance away on Slough Creek and offered to act as a guide. Harvey ordered the camp to be struck and an advance made, and at about 3 o’clock the next morning, the Carolinians were surrounded. Some lively shooting ensued when the southerners discovered their predicament, but no one on either side was killed, and one Carolinian was injured. About 30 Carolinians composed the camp. All but a half dozen were captured, together with their equipment, among which was a flag presented to them by the ladies of Charleston, South Carolina, before they started for Kansas. 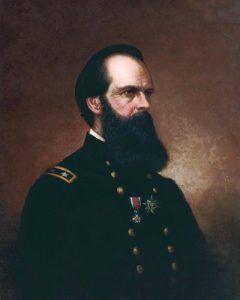 Two days later, Colonel Harvey would lead his men in another skirmish — the Battle of Hickory Point.