In 1856, as free state advocates and pro-slavery supporters continued to clash over whether Kansas would join the Union as a free or slave state, tensions were high.

Late that May, Captain H. C. Pate, in command of a company of Shannon’s Sharp-shooters, started for Osawatomie for the purpose of capturing John Brown. Brown was wanted for his participation in the execution of five proslavery men in what became known as the Pottawatomie Massacre, which was in retribution for the Sacking of Lawrence on May 21.

Pate’s men found two of Brown’s sons — John and Jason, the former a member of the legislature — working on their farms, arrested them and put them in irons, but the elder Brown was in hiding. A few other free-state men were arrested and some cabins burned.

Soon after this Captain Wood arrived with a company of dragoons and the prisoners were turned over to him. Both companies then moved toward the Santa Fe Trail,  Wood heading toward Lecompton with the prisoners. On the march, the two Browns were treated with great severity, and this, with the false stories of murder, told on his father, caused the younger John’s mind to give way, and at times he was violently insane.

Pate’s company made camp near Hickory Point, on the head of a small branch called Black Jack, five miles southeast of Palmyra, at the head of a ravine on the edge of the prairie a little north of the Santa Fe Trail.  William Addison Phillips in his Conquest of Kansas described it, “The bottom of the ravine at Black Jack, besides the growing timber, had some deep water-drains or ruts, round which was a thicket; there were several bogs on the spot where the camp was.”

That night Pate’s company occupied the town of Palmyra and took several prisoners. In the morning they plundered the place, and in the afternoon six of his men attempted the same thing at Prairie City. Being Sunday, most of the people were at church, but, as they attended services armed, the men rushed out when a watchman gave the alarm and two of the men were captured. 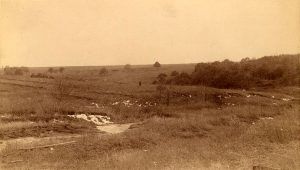 Meanwhile, as soon as he heard of the capture of his sons, John Brown was determined to rescue them and watched for the enemy’s camp with the design of attacking it and releasing the prisoners. He hunted through the woods of the Marias des Cygnes and Ottawa Creeks. On Saturday night, Captain Shore, a free-state man who commanded the Prairie City Company, had been out assisting Brown in reconnoitering for the enemy. On Sunday night Shore and his men accompanied by Captain Brown continued the search for the camp but were unsuccessful. They had returned to Prairie City when two scouts brought the news of Pate’s camp on the Black Jack, some miles away. Brown had been accompanied from Osawatomie by about 12 men, including three of his other sons. Immediately upon learning of the whereabouts of Pate, Brown, and Shore, with about 20 men, moved toward Black Jack in the pre-dawn hours of June 2, 1856.

On arriving within a mile of the camp, they dismounted, left the horses in charge of two men and dispatched two messengers for help — one to Palmyra and another to Captain Abbott’s company some eight miles distant on the Wakarusa. The remainder of the party divided, each captain commanding his own men marched toward the enemy. There were about 50 men under Pate’s command. They had formed a kind of breastwork by placing four wagons in a line several rods out on the prairie from the edge of the ravine and had pitched a tent behind the wagons. This was the condition of the camp at about 6 o’clock that morning when the alarm was given that the free-state men were coming.

Pate drew up his men behind the temporary breastworks. His position was a strong one, as it afforded shelter for his men, and except by coming up the ravine from the direction of Hickory Point, had to be approached over open prairie. When they ascertained the enemy’s position, Brown directed Shore to go the left and get into the ravine below them, while Brown was to go into the upper part of the ravine, the bottom of which was covered with long grass.

Owing to a bend in the ravine, this division of the forces would bring the enemy in range of both forces and under a cross-fire. Shore, however, approached the enemy over the open prairie and poured a volley on the pro-slavery men from the front, while Brown, who had placed his men in the tall grass within the outer banks of the ravine, opened fire upon their left flank.

After the firing had lasted about five minutes Pate retreated from the wagon to the ravine, where he found shelter. This left Shore exposed to the fire of the concealed enemy and he was forced to retreat up the slope until out of range. Shore and a few of his men joined Brown in the ravine, where they continued firing from the long grass. The firing had little effect as the free-state party had only four guns of long-range and there were only three or four Sharpe’s rifles in both companies. 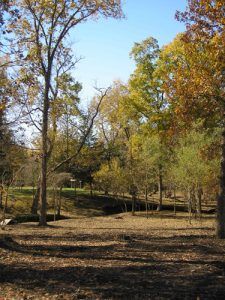 The prisoners held by Pate had been stationed in the tent with a guard and when the firing began they lay flat on the ground so that the bullets whistled over their heads. After the battle had waged some time one of the enemy rushed into the tent with the intention of shooting them but one of the prisoners, Dr. Graham, at whom he aimed, sprang up, received only a slight flesh wound and rushed off to the men on the hill.

The firing lasted for about three hours, during which time two free-state and three pro-slavery men were wounded. The latter knew that Shore and Brown would soon receive reinforcements and one by one they gradually slipped down the ravine until out of range, secured horses and rode away. Pate’s ammunition running low, he finally sent a young man and a prisoner to Brown’s camp under a flag of truce, but as Brown would not talk with anyone but the commander of the force, Pate came out. After some parleying, in which Pate claimed he was acting as an officer under the United States marshal, Brown declared he would consider nothing but unconditional surrender. As most of Pate’s men had deserted him, he yielded and thus 21 men, besides the prisoners, provisions, horses, mules and other camp equipage, as well as a quantity of the plunder taken from Palmyra, were turned over to Brown.

Soon after the surrender, the free-state forces were augmented by Captain Abbott and about 50 men from the Wakarusa and later in the day by others. The wounded were taken to Prairie City and cared for and Captain Brown moved with his prisoners to the thick woods of Middle Ottawa Creek to the back of Prairie City where he entrenched himself, holding Pate and the rest as prisoners to exchange for the release of his two son’s.

The Battle of Black Jack was the first armed conflict between proslavery and antislavery forces in the United States, with some even considering it as the first true battle of the Civil War, even though the “official” event that is cited as the beginning of the war is the attack on Fort Sumter in Charleston, South Carolina, by Confederate troops on April 12, 1861.  It would bring more division to a nation already divided over the slavery issue and would bring John Brown to the attention of the nation with his call for armed insurrection to end slavery.

The battlefield was designated as a National Historic Landmark in 2012 and is located near U.S. Highway 56, about three miles east of Baldwin City, near the Robert Hall Pearson Memorial Park. A historical marker designates the site and interpretive signs point out where the battle started and ended. 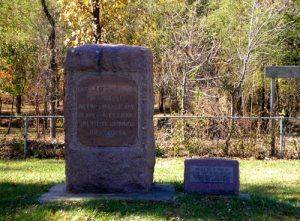