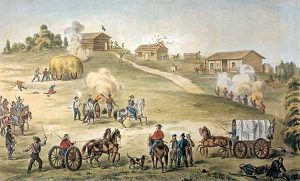 The settlement of Hickory Point in Jefferson County, Kansas, was laid out in March 1855 on the north side of the military and freight road. One of the first settlers, Charles Hardt, was appointed postmaster. There had been a contest between the Free-State and pro-slavery residents of the vicinity from the first settlement. Party feelings ran high, and each faction regarded the other as having no rights. At the first election, the pro-slavery men took possession of the polls, and there was little respect for law and order on either side. After the outrages perpetrated at the first election, each party held an election and refused to acknowledge the other as legal. By the summer of 1856, the Free-State settlers had become the stronger faction and were determined to drive the other party out.

The settlement consisted of three log buildings, a store, a hotel, and a blacksmith shop. Both parties in the neighborhood went armed, and several skirmishes occurred. On June 8, 1856, two pro-slavery men, Jones and Fielding, were driven away.

When Governor John Geary arrived in the territory, he issued a proclamation ordering all armed bodies to disperse. General James H. Lane was near Topeka at the time and did not know of the proclamation. With his party, he was starting for Holton when a messenger arrived from Osawkie, with the news that the border ruffians had burned Grasshopper Falls and intended to burn the other Free-State towns in the vicinity to drive the settlers out of the country. The assistance of Lane and his command was asked for, and they marched to Osawkie, where the local Free-State men increased their force. Having restored order there, Lane learned that an armed force of pro-slavery men was at Hickory Point and marched there determined to capture them.

On arriving, on September 13, 1856, he found about 100 men assembled, under the command of Captain H. A. Lowe, the owner of Hickory Point, assisted by about 50 Carolinians, who had been committing outrages throughout the country. An attack was made, but the pro-slavery men were too well fortified to be driven out. Lane then sent word to Lawrence for Captain Bickerton to bring reinforcements and the now historic cannon “Sacramento.” The news reached Lawrence on Saturday, September 13th. Colonel Harvey gathered a company of recruits, started at once, marched all night, stopping at Newell’s mills just long enough for breakfast, and arrived at Hickory Point about 10 a.m. Sunday. In the meantime, Lane had heard of the governor’s proclamation and had started for Topeka, expecting to meet the forces from Lawrence on the road. But Colonel Harvey, having taken the direct route, missed Lane. When Harvey and his forces came up, the pro-slavery men tried to retreat but were soon surrounded and took refuge in the log houses. No messages were exchanged. The cannon was placed in position about 200 yards south of the blacksmith shop and commenced firing. It was supported by about 20 men armed with United States muskets. The Stubbs company was stationed about 200 yards to the southeast in a timbered ravine. The first cannon shot passed through the blacksmith shop and killed Charles G. Newhall.

Finding it impossible to dislodge the pro-slavery men, Colonel Harvey ordered a wagon load of hay backed up to the shop and set on fire. Some of the men were fired upon but got away under cover of the smoke. Soon after, a white flag was sent out from the shop asking permission for some non-combatants to leave the buildings. Messages were sent back and forth, and a compromise was reached by which each party agreed to give up its plunder, and all non-residents of each party were to leave the country. One pro-slavery man was killed, and four were wounded. Three Free-State men were injured — one was shot in the legs, one shot through the lungs, and other had a bruised head. This ended the battle of Hickory Point. 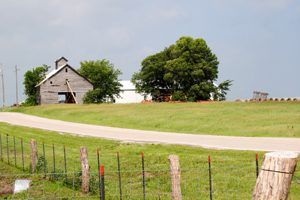 The battle site is designated by a historical marker on US 59, north of Oskaloosa, in Jefferson County, Kansas.

Territorial Kansas & the Struggle For Statehood

About the Article: This historic text was published in Kansas: A Cyclopedia of State History, Volume I; edited by Frank W. Blackmar,  A.M. Ph. D.; Standard Publishing Company, Chicago, IL 1912. The text that appears on this page is not necessarily verbatim, as we edited it for spelling, grammar, and sometimes truncation.