Abolitionist John Brown “liberated” eleven slaves from the Hicklin, Cruise, and LaRue farms in Missouri during the Bleeding Kansas fight on December 20th, 1858. He and only one escort, George B. Gill, hid them in a covered wagon and circled north on the underground railroad toward Nebraska and freedom.

The party passed through Lawrence, Kansas, where clothing was secured for the freed slaves, then on through Topeka, where they were joined by several men, and then moved north towards Holton, Kansas. By that time, they no longer feared traveling by daylight and pushed on to the log cabin of Albert Fuller on Straight Creek, one of the stations of the Underground Railroad. They decided to spend the night and were detained for several days because of high water. One evening Dwight Stevens, who had joined Brown near Topeka, went down the stream to water his horse when he was accosted by two U.S. Deputy Marshals on horseback.

They asked him if he had seen any slaves in the vicinity, to which Stevens replied that there were some in the Fuller cabin and volunteered to accompany them to the house. This apparent frankness on the part of Stevens threw the men off their guard, and only one accompanied him. Stevens then spent some time attending to his horse to give the men in the cabin time to see who was with him and to prepare for them. The two men moved to the cabin, threw open the door, and said, “There they are, go take them.” The marshal moved forward but found himself covered by revolvers and was taken prisoner. This man was a posse member under the command of John P. Wood, a U.S. Deputy Marshal from Lecompton, Kansas, who was on the lookout for Brown in hope of securing the reward of $3,000 offered for his apprehension by the governor of Missouri.

Across the creek, a half a mile away, lay Wood’s posse entrenched in rude rifle pits they had thrown up to command the ford and the road leading to it. Upon learning that Brown proposed to cross the ford in the face of the enemy, they attempted to dissuade him, saying that the stream was high, the crossing dangerous, and there was a much better ford five miles up the creek. Brown said that he intended to travel straight through, that those who were afraid might turn back, but he intended to use the Fuller Crossing, saying, “The Lord has marked out a path for me, and I intend to follow it. We are ready to move.” 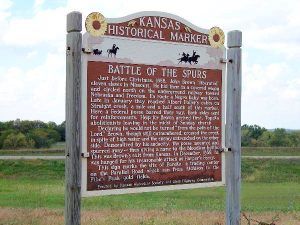 On January 31, 1859, Brown and his men moved forward. Some of the men were uneasy, knowing that 45 entrenched men were waiting across the creek, but with Brown in the lead, the 21 men moved into the road and started straight for the crossing. Brown appeared utterly unaware of Wood and his posse and led the way to the ford. Not a shot was fired, and as the first free-state party reached the creek, some commotion was noticed in the rifle pits. Part of Wood’s men ran toward the horses, and within a short time, nearly the entire posse was retreating in wild panic. The Topeka party then charged across the creek to give chase but found only four men left in the rifle pits. These men were made prisoners, and Brown proceeded on his way toward Iowa, being accompanied by the Topeka party as far as Seneca, Kansas.

The terror Brown had inspired in his enemies was never better illustrated than at this time. Free-Staters labeled the confrontation the “Battle of the Spurs,” mocking the proslavery posse fleeing on horseback.

This was Brown’s exit from Kansas. In December 1859, he was hanged for his attack at Harpers Ferry, West Virginia.

A historic marker for The Battle of the Spurs is located on the roadside along US Highway 75, about seven miles north of Holton, Kansas. The actual battle site was about a half a mile south of the marker.