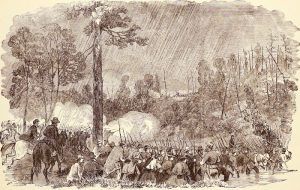 Taking place on the Cheat River in Tucker County on July 13, 1861, this skirmish was part of the Operations in Western Virginia Campaign. After Union Major General George B. McClellan defeated part of Confederate Brigadier General Robert S. Garnett’s forces at the Battle of Rich Mountain, Garnett fell back toward Virginia with approximately 4,500 men and began to march towards Beverly. Union Brigadier General Thomas A. Morris pursued them with his Indiana brigade and around noon on July 13, Morris overtook Garnett’s rear guard at Corrick’s Ford on the Cheat River and attacked the retreating Confederates. The Rebels began to withdraw and a running skirmish was fought, in which Garnett was killed. The Confederates then fled, leaving behind their dead commander, a cannon, and nearly 40 wagons. Garnett was the first general officer killed in the Civil War.

The Battle of Scary Creek was a minor battle fought across the Kanawha River from present-day Nitro in Putnam County, West Virginia on July 17, 1861. As Union forces under General Jacob Cox began a push up the Kanawha Valley from Ohio, they came upon a Confederate camp commanded by Confederate General Henry A. Wise with a few thousand troops near present-day St. Albans. The battle occurred when Union regiments advanced toward the camp but were repulsed by Captain George S. Patton. The Confederates, who thought that fresh Union reinforcements were arriving, also retreated. Realizing their mistake, the Confederates returned to the battlefield to claim victory. Afterward, General Wise withdraw his forces toward the Confederate supply bases in Fayette and Greenbrier Counties. This retreat resulted in most of the Kanawha Valley falling into Union hands and General Wise was highly criticized. During the battle, the Union lost 14 killed, approximately 30 wounded, and several went missing. The Confederates lost between 1-5 killed and about six were wounded, including Captain Patton.

The Battle of Kessler’s Cross Lanes, also known as the Battle of Cross Lanes took place in Nicholas County on August 26, 1861, as part of the Western Virginia Campaign. On August 26, Brigadier General John Floyd, commanding Confederate forces in the Kanawha Valley, crossed the Gauley River to attack Union Colonel Erastus Tyler’s 7th Ohio Regiment who were encamped at Kessler’s Cross Lanes. The Union forces were surprised and routed. Floyd then withdrew to the river and took up a defensive position at Carnifex Ferry. During the month, Confederate General Robert E. Lee arrived in western Virginia and attempted to coordinate the forces of Brigadier Generals John Floyd, Henry Wise, and William W. Loring. The Confederate victory resulted in 245 Union casualties and 40 Confederate casualties. 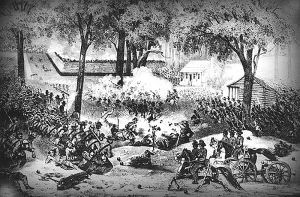 The Battle of Carnifex Ferry occurred in Nicholas County on September 10, 1861, as part of the Operations in Western Virginia Campaign. When Union Brigadier General William S. Rosecrans learned of Colonel Erastus Tyler’s rout at Kessler’s Cross Lanes, he moved three brigades south from Clarksburg to support him. On the afternoon of September 10, he advanced against Confederate Brigadier General John Floyd’s camps at Carnifex Ferry. When darkness fell after several hours of fighting, the battle stopped and the strength of the Union artillery convinced Floyd to retreat during the night. Floyd blamed his defeat on his co-commander Brigadier General Henry Wise, contributing to further dissension in the Confederate ranks. The Union victory resulted in estimated total casualties of 250.

The Battle of Cheat Mountain took place in Pocahontas County on September 12-15, 1861 as part of the Operations in Western Virginia Campaign. It occurred when Confederate General Robert E. Lee directed his first offensive of the war against Union Brigadier General Joseph Reynolds’s entrenchments on the summit of Cheat Mountain and in the Tygart Valley. The Confederate attacks were uncoordinated, however, and the Federal defense was so stubborn that Colonel Albert Rust, who was leading the attacks, was convinced that he was confronting an overwhelming force. In actuality, however, he was facing only about 300 Union soldiers who were very determined. General Lee ended up calling off the attack and, after maneuvering in the vicinity, withdrew to Valley Head on September 17. In October, Lee renewed operations against Laurel Mountain with the troops of Confederate General John Floyd and William Loring, but the operation was called off because of poor communication and lack of supplies. Lee was recalled to Richmond, Virginia on October 30 after achieving little success in western Virginia. The Union victory resulted in total casualties of 170 men, with 80 of the Union and 90 of the Confederate.

Taking place in Pocahontas County, West Virginia, the Battle of Greenbrier River, also referred to as the Battle of Camp Barlow, took place on October 3, 1861, as part of the Western Virginia Campaign. During the night of October 2-3, Union Brigadier General Joseph Reynolds with two brigades advanced from Cheat Mountain to reconnoiter the Confederate position at Camp Bartow on the Greenbrier River. Reynolds drove in the Confederate pickets and opened fire with his artillery. After sporadic fighting and an abortive attempt to turn his enemy’s right flank, Reynolds withdrew to Cheat Mountain. The inconclusive battle resulted in about 40 Union casualties and the same number of Confederate casualties.

The Raid on Guyandotte took place in Cabell County when the Confederate cavalry attacked the town of Guyandotte and the small untrained Union force stationed there. On November 10, 1861, Confederate Colonel John Clarkson with about 700 cavalry troops attacked a Union recruit camp for the Ninth West Virginia Infantry regiment at Guyandotte. The Federal recruits, who numbered slightly more than 100 men, fought valiantly but were quickly overcome. The Confederates then rounded up 98 Union recruits and civilians and began to march them to Richmond the next day. A detachment of the Fifth West Virginia Infantry, accompanied by a number of Home Guards from Ohio, arrived after the Confederate Cavalry and the prisoners had departed. In retaliation for the Confederate attack and in response to accusations that the townspeople had aided the Confederates, the Union forces burned the town. Northern newspapers expressed outrage over the actions of the town’s citizens and rejoiced at Guyandotte’s destruction. 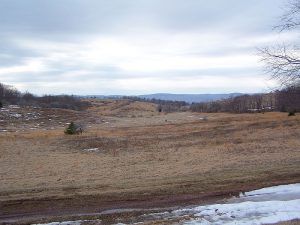 The Battle of Camp Alleghany also called the Battle of Allegheny Mountain, took place in Pocahontas County on December 13, 1861. Part of the Western Virginia Campaign, Confederate forces under Colonel Edward Johnson occupied the summit of Allegheny Mountain in December 1861 to defend the Staunton-Parkersburg Pike. A Union force under Brigadier General Robert Milroy attacked Colonel Johnson on December 13. Fighting continued for much of the morning as each side maneuvered to gain the advantage. Finally, Milroy’s troops were repulsed, and he retreated to his camps near Cheat Mountain. At year’s end, Edward Johnson remained at Camp Allegheny with five regiments, and Henry Heth was at Lewisburg with two regiments. The estimated casualties of the inconclusive battle resulted in 137 Union and 146 Confederate.

The Union’s first goal in the early days of the Civil War was to capture the Confederate capital of Richmond, Virginia. Situated only 100 miles from Washington, D.C., the Federal troops first had to capture Manassas Junction, an important railway junction 30 miles southwest of Washington, before they could get to Richmond. Union soldiers set out for Manassas on July 16, 1861. The campaign resulted in two battles in Virginia — Blackburn’s Ford and the First Battle of Manassas. The only battle of the campaign fought in present-day West Virginia was the Battle of Hoke’s Run. 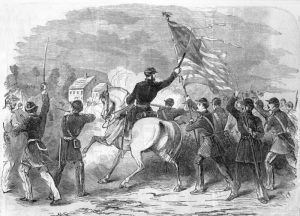 Fought during the Manassas Campaign, the Battle of Hoke’s Run, also called the Battle of Falling Waters and the Battle of Hainesville, occurred in Berkeley County on July 2, 1861. On that date, Union Major General Robert Patterson’s division crossed the Potomac River near Williamsport, Maryland and marched on the main road to Martinsburg, West Virginia. Near Hoke’s Run, Colonels John Abercrombie’s and George Thomas’ brigades encountered regiments of Confederate Brigadier General Thomas J. Jackson’s brigade and drove them back slowly. Jackson’s orders were to delay the Federal advance only, which he did, withdrawing before Patterson’s larger force. On July 3, Patterson occupied Martinsburg but made no further aggressive moves until July 15, when he marched to Bunker Hill. Instead of moving on Winchester, however, Patterson turned east to Charles Town and then withdrew to Harpers Ferry. This retrograde movement took pressure off the Confederate forces in the Shenandoah Valley and allowed General Joseph Johnston’s army to march to support Brigadier General P.G.T. Beauregard at Manassas. Patterson’s inactivity contributed to the Union defeat at First Manassas. The Union victory resulted in estimated casualties of 23 Union soldiers and 91 Confederates.

Confederate General Stonewall Jackson’s operations against the Baltimore and Ohio Railroad in 1861-1862 were aimed at disrupting the critical railroad used heavily by the opposing Union Army as a major supply route. The Confederates also wanted to capture a number of locomotives and railroad cars for use in their cause. Jackson had long urged the strategic value of an offensive out of the Shenandoah Valley, which could threaten Washington and destroy Union east-west communications by breaking the Baltimore & Ohio Railroad.

The Battle of Hancock, also called the Romney Campaign, was a battle fought during the Romney Expedition in Washington County, Maryland, and Morgan County, West Virginia on January 5-6, 1862. On January 1, Major General Thomas J. “Stonewall” Jackson marched north in bitter cold from Winchester, Virginia to Bath (present-day Berkeley Springs), West Virginia with the objective of disrupting traffic on the Baltimore and Ohio Railroad and Chesapeake and Ohio Canal. On January 5, after skirmishing with the retiring Federals, Jackson’s force reached the Potomac River opposite the garrisoned town of Hancock, Maryland. His artillery fired on the town from Orrick’s Hill but did little damage. Union garrison commander Brigadier General F.W. Lander refused Jackson’s demands for surrender. Jackson continued the bombardment for two days while unsuccessfully searching for a safe river crossing. The Confederates withdrew and marched on Romney, in western Virginia, on January 7. The inconclusive battle resulted in total estimated casualties of 25. Today, the historic district of Hancock retains many buildings present in 1862, including two churches damaged during the Confederate artillery barrage.