I can anticipate no greater calamity for the country than a dissolution of the Union. 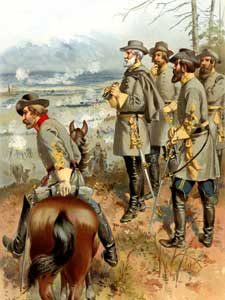 The past is dead; let it bury its dead, its hopes and its aspirations; before you lies the future–a future full of golden promise.

Seeing more major Civil War battles than any other state, Virginia was a prominent part of the Confederate States of America. In the winter of 1860–1861, Americans were forced to decide their nation’s future. States in the lower South began seceding from the Union in December 1860. Still, Virginia, with the most diversified economy and the largest population of the slave states, remained part of the Union. However, that would change after President Abraham Lincoln, on April 15, 1861, called for troops from all states still in the Union in response to the Confederate capture of Fort Sumter, South Carolina. Two days later, on April 17, the Virginia convention voted to secede, pending ratification of the decision by the voters.

Virginia stretched from the Atlantic Ocean to the Ohio River at this time, and Virginia citizens didn’t all agree with secession. In the western part of the state, some Virginians never accepted secession and instead began a process that created the new state of West Virginia.

Virginians ratified the articles of secession on May 23. The following day, the Union army moved into northern Virginia and captured Alexandria without fighting.

Most of the battles in the Eastern Theater of the Civil War took place in Virginia because the Confederacy had to defend its national capital at Richmond. Union forces made several failed attempts to capture Richmond. The remarkable success of General Robert E. Lee in defending the Confederate capital was a central theme of Civil War history.

From the first big battle at Manassas/Bull Run in 1861 to the surrender of Lee’s army at Appomattox in 1865, Virginia stayed in the headlines throughout the Civil War. More than 2,000 “military events” were recorded in Virginia during the war, more than any other state. By the time General Robert E. Lee surrendered in 1865, much of the state had been ravaged by war. No part of the state escaped, with battles fought deep in the mountains to the Atlantic coast.