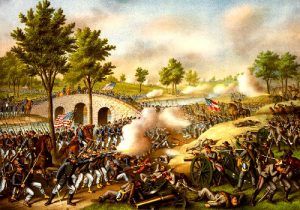 Sometimes referred to as the Antietam Campaign, this series of four battles took place in September 1862 in West Virginia and Maryland. Considered one of the major turning points in the war, Confederate General Robert E. Lee’s goal was to reach the major Northern states of Maryland and Pennsylvania in order to threaten the cities of Washington and Baltimore, supply his army from the untouched farms, relieve the habitual fighting in Virginia, and hopefully make such an impact that the end of the war might be negotiated.

Lee divided his army into five parts, with General “Stonewall” Jackson taking three of them to attack Harpers Ferry, in order to control the Shenandoah Valley.

General James Longstreet would lead the fourth part to Hagerstown to guard against a rumored movement of Union troops from Pennsylvania, and the fifth and final part, under the command of General Daniel Harvey Hill, was to guard the reserve artillery and wagon train at Boonsboro, Maryland, as well as watching for escaping Federals from Harpers Ferry.

On September 4, 1862, the Army of Northern Virginia crossed the Potomac River and began the Maryland Campaign which would be repulsed by Major General George B. McClellan and the Army of the Potomac, who intercepted General Robert E. Lee and his Army of Northern Virginia, attacking them near Sharpsburg, Maryland. The resulting Battle of Antietam was the bloodiest single-day battle in American History. 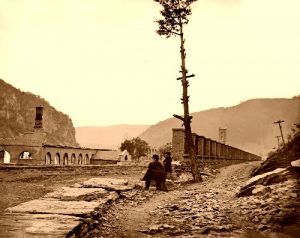 Harpers Ferry (September 12-15, 1862) – In Lee’s first invasion of the North, General Robert E. Lee planned to first attack Harpers Ferry, in order to control the Shenandoah Valley, capture its supplies, and secure his own supply line back to Virginia. He divided his army into four columns, three of which converged upon and attacked Harpers Ferry. On September 15, Confederate artillery was placed on the heights overlooking the town, which was virtually indefensible, dominated on all sides by higher ground, and not properly fortified.

As the Confederates bombarded the garrison from all sides and were preparing an infantry assault when Colonel Dixon S. Miles surrendered the garrison of more than 12,000 men.

It would be his last military action, as Miles, himself, was mortally wounded by a last discharge of firearms from a battery on Loudoun Heights.

Confederate Major General “Stonewall” Jackson took possession of Harpers Ferry, then led most of his soldiers to join Lee at Sharpsburg. Major General A.P. Hill’s division was left to complete the occupation of the town.

After paroling the prisoners at Harpers Ferry, Hill’s division would also join Lee, just in time to save Lee’s army from near-defeat at Sharpsburg. Less than 100 men were killed in the battle of Harpers Ferry. 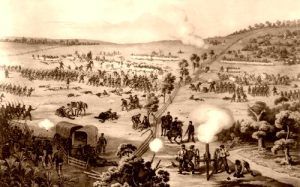 South Mountain (September 14, 1862) – Also called the Battle of Crampton’s, Turner’s, and Fox’s Gaps, this skirmish took place in Frederick and Washington Counties, Maryland. While the vast majority of General Robert E. Lee’s Army was attacking Harpers Ferry, the rest were marching on to Maryland, with Major General George B. McClellan hotly in pursuit. Following them to Frederick, Maryland, McClellan advanced on them at South Mountain, a natural formation that separates the Shenandoah and Cumberland Valleys from the eastern part of Maryland. A number of battles were fought on September 14th over possession of the South Mountain passes: Crampton’s, Turner’s, and Fox’s Gaps.

By dusk, the Confederate defenders were driven back, suffering severe casualties, and McClellan was in a position to destroy Lee’s army before it could re-concentrate.

However, McClellan’s limited activity the next day gave Lee time to unite his scattered divisions at Sharpsburg. In the South Mountain Battle, an estimated 4,500 casualties were suffered including Union general Jesse Reno and Confederate General Samuel Garland, Jr. who were killed. 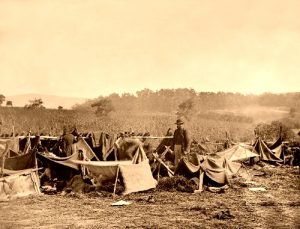 Caring for the wounded at Antietam, 1862

Shepherdstown (September 19-20, 1862) – Also referred to as the Battle of Boteler’s Ford, this encounter took place in Jefferson County, West Virginia as the Confederate forces retreated southward. On September 19, a detachment of Union Major General Fitz John Porter’s V Corps pushed across the river at Boteler’s Ford, attacked the Confederate rearguard commanded by Brigadier General William Pendleton, and captured four guns. Early on the 20th, Porter pushed elements of two divisions across the Potomac to establish a bridgehead. Confederate Major General A.P. Hill’s division counterattacked while many of the Federals were crossing and nearly annihilated the 118th Pennsylvania (the “Corn Exchange” Regiment), inflicting 269 casualties. This rearguard action discouraged Federal pursuit. On November 7, President Abraham Lincoln relieved McClellan of command because of his failure to follow up Lee’s retreating army and Major General Ambrose E. Burnside rose to command the Union army. The end result of the battle was 625 casualties.