The Manassas Campaign was a series of military engagements in Virginia during the Civil War in July 1861. The Union’s first goal in the early days of the Civil War was to capture Richmond’s Confederate capital. Situated only 100 miles from Washington, D.C., the Federal troops first had to capture Manassas Junction, a critical railway junction 30 miles southwest of Washington, before getting to Richmond. Union soldiers set out for Manassas on July 16, 1861. So naive was the nation about the coming horrors that 200 or so private citizens from Washington, D.C., accompanied federal troops on the march. They hoped to witness and be entertained by this once-in-a-lifetime event.

Hoke’s Run (July 2, 1861) – The Battle of Hoke’s Run, also known as the Battle of Falling Waters or Hainesville, took place on July 2, 1861, in Berkeley County, Virginia (now West Virginia) as part of the Manassas Campaign of the Civil War. On July 2, Major General Robert Patterson’s division crossed the Potomac River near Williamsport, Maryland, and marched on the main road to Martinsburg. Near Hoke’s Run, the Union brigades of Colonels John J. Abercrombie and George H. Thomas encountered regiments of Colonel Thomas J. Jackson’s Confederate brigade, driving them back slowly. Jackson accomplished his orders to delay the Federal advance, withdrawing before Patterson’s larger force. The Union victory resulted in an estimated 23 Union casualties and 91 Confederate.

Blackburn’s Ford (July 18, 1861) – This battle took place in Prince William County and Fairfax County, Virginia. On July 16, 1862, the untried Union army under Brigadier General Irvin McDowell, 35,000 strong, marched out of the Washington defenses to battle the Confederate army, concentrated around the vital railroad junction at Manassas. The Confederate army, about 22,000 men, under the command of Brigadier General P.G.T. Beauregard, guarded Bull Run’s fords. On July 18, McDowell reached Centreville and pushed southwest, attempting to cross at Blackburn’s Ford. However, the Union troops were repulsed by Confederate fire, and commanders decided to cross the creek farther upstream. The Confederate victory resulted in estimated casualties of 83 Federal and 68 Confederate. 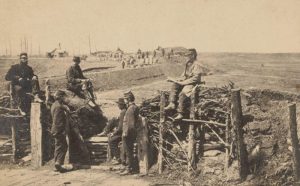 First Battle of Manassas (July 21, 1861) – Also called the First Battle of Bull Run, this was the first major land battle of the Civil War. Fought in Prince William County, Virginia, near Manassas, the two armies met in battle on July 21, 1861, along the banks of a small stream known as Bull Run. Under Brigadier General Irvin McDowell, the Union army crossed at Sudley Ford and attacked the Confederate left flank on Matthews Hill. Fighting raged throughout the day as Confederate forces were driven back to Henry Hill. Late in the afternoon, Confederate reinforcements arrived, and the federal troops were driven from the battlefield along with many of the sightseers.

Although victorious, Confederate forces were too disorganized to pursue. Confederate General Bee and Colonel Bartow were killed. Thomas J. Jackson earned the nickname “Stonewall.” The conflict, which engaged some 60,680, resulted in an estimated 2,950 casualties for the Union and 1,750 for the Confederate Army.

This battle brought an end to the romantic way in which most Americans had viewed the coming conflict. By July 22, the shattered Union army reached the safety of Washington. This battle convinced the Lincoln administration that the war would be a long and costly affair. McDowell was relieved of command of the Union army and replaced by Major General George B. McClellan, who set about reorganizing and training the troops.