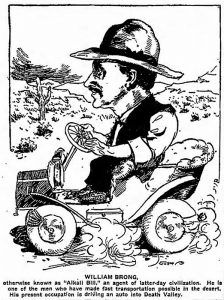 Alkali Bill Brong by the Los Angeles Times, May 1907.

William F. “Alkali Bill” Brong didn’t make his money in mining in Death Valley; rather, he earned his living by hauling people around in his “Death
Valley Chug Line.”

During Death Valley’s mining heydays, transportation was one of the biggest problems for miners and investors alike. William Brong, who soon took on the nickname of “Alkali Bill,” determined to make his living by helping to solve the problem. Several stage lines ran from the closest railheads to many of the mining towns. Still, a few industrious entrepreneurs offered travel in “luxurious” steam-powered vehicles for those that could afford the price.

During Rhyolite, Nevada’s heydays, four daily concord stages arrived from Goldfield, making the 60-mile trip in two days, which cost each passenger $18 apiece. Several rival auto lines ran, not only from Goldfield but also from Las Vegas, but “Alkali Bill” was known as having the record time of three hours and 40 minutes on the Goldfield-Rhyolite run in his specially built Columbia steam-powered tour car.

In the summer of 1905, he claimed to have logged 20,000 miles on that run. Bill charged $25 for the trip from Goldfield to Rhyolite, seven dollars more than the stage, but many could afford it. Alternately, he and his car could be chartered for $100 a day. When the Greenwater District of California opened up, he transported people there as well. He even formed a company to manufacture special autos for desert travel.

A writer for the Los Angeles Times had to say about him in May 1907:

“Brong drives without goggles or leather cap. He has none of the paraphernalia of a chauffeur. His appearance is distinctly desert-like. He looks much like a mule driver, and, riding behind him, if you have ridden in a freighter’s wagon, you come to look for the long, lashed whip. He wears a high-crowned Stetson, and borax and alkali dust have caked its brim from black to gray-white. At the end of the day’s journey, his face is masked with this dust.” 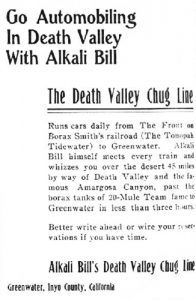