In 1925, the town was boosted by the building of Scotty’s Castle, a fantasy house in the green oasis of Grapevine Canyon some 20 miles to the southwest. For the next three years, nearly all the items required in the difficult construction of the elaborate castle arrived at the Bonnie Claire station over the Tonopah & Tidewater Railroad. From there, the supplies were hauled by mule-drawn wagons and four-wheel drive trucks to the site.

The elaborate mansion was never finished and in 1928, when the railroad pulled out of Bonnie Claire, the town quickly died. Its post office closed and the railroad tracks removed in 1931. Later, the area was revived by the Lippincott Smelter which processed lead ore from the Lippincott Mine from 1935-1953.

Significant ruins remain at the site including the ruins of the Lippincott Smelter, Montana Station Mill, and a couple of buildings. It is located about 20 miles northeast of Scotty’s Castle on CA-72/NV267. 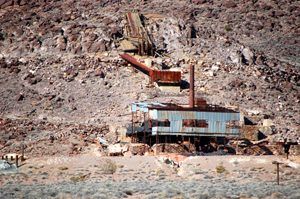 Remains of the Bonnie Claire Mine, photo by Dave Alexander, February, 2015. 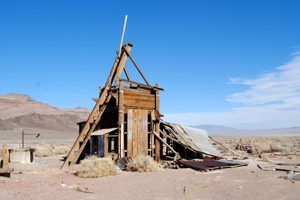 A smaller mine across from the main Bonnie Claire Mine, photo by Kathy Weiser-Alexander, February, 2015.

Bowlerville – A mining camp in the early 20th Century, it was located a few miles south of the Johnnie Mine. It was named to commemorate Fred Bowler, who owned the mine.

Browne’s Camp – Located in Nye County, Nevada, this was a short lived mining camp that existed around 1907. Though some shallow ore deposits were found, they were not productive enough to continue and the camp was abandoned. By the 1920’s it had disappeared from maps. There are no remains. 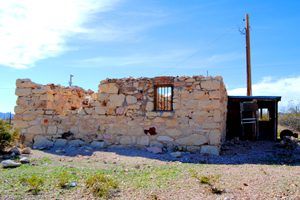 Bullfrog – Also called Bonanza and Amargosa City, Bullfrog was established after famous prospector Shorty Harris discovered gold nearby in 1904, and the Original Bullfrog Mine was opened. The entire tent town of Original (also called Amargosa,) which was located near the original Bullfrog mine, moved to the Bullfrog townsite in March, 1905. Within no time the town boasted about 1,000 people, a two-story hotel, a jail, post office, another three-story hotel, a lodging house, a general store, a bank, and an icehouse, as well as a number of other businesses and homes. However, at the same time, the nearby town of Rhyolite was also being established, which quickly caused a fierce competition between the two communities. Making matters worse for the fledgling mining camp were a number of fatal gunfights.

As Rhyolite continued to grow, Bullfrog declined and by 1907 it was nearly empty. Many of its buildings had been moved to Rhyolite. The post office lasted until May, 1909. Both Rhyolite and what was left of Bullfrog were were doomed by the financial panic of 1907. The town’s last large building, a hotel, burned to the ground in June, 1906. Today, all that’s left of the old townsite are the remains of an ice house and a jail. Nearby is the Bullfrog-Rhyolite cemetery, just south of the Bullfrog townsite. It is located at the north end of the Amargosa Desert about four miles west of Beatty. Less than a mile  north of Bullfrog are the Bullfrog Hills and the ghost town of Rhyolite. 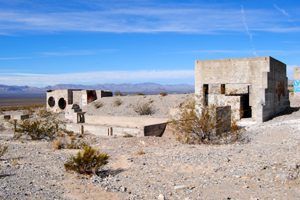 An old cement plant near the ghost town of Carrara, Nevada. Photo by Kathy Weiser-Alexander.

Carrara – A town founded on marble quarrying, the settlement got its start as early as 1904, but it wasn’t officially dedicated until 1913. The post office closed in 1924. A cement company built several buildings about a mile north of the townsite in 1936, but it never began operations. The ruins of several large stone buildings associated with the old cement company can still be seen. At the townsite itself, little is left but a few foundations. Up the hill are the sparse remains of the Gold Ace Mine and the marble quarries. It is located 8.75 miles south of Beatty, Nevada on US 95.

Charlestown – Located in Nye County, Nevada, Charlestown was an obscure railroad and mining camp that came into existence in 1906 as the Las Vegas & Tonopah Railroad progressed westward to Rhyolite. When the railroad tore up its tracks in 1918, the camp was abandoned. Only some wood rubble from the water tank tower marks the site.

Chloride City – This settlement was established in 1905 when the Bullfrog strike brought people into the area to re-work old mining claims, established as early as 1873. Having a very short life, it became a ghost town within a year. It was revived in 1916 and the remains that can be seen today are primarily from that time period. A few mine openings, mill ruins, dumps, and the remains of three stamp mills can be seen in the area along with the grave of a man named James McKay, of whom nothing is known. It is located in the East-central side of Death Valley; 14 miles Southwest of Beatty, Nevada.

Currie Well – Currie Well’s claim to fame rests mostly on its use as a desert watering hole for stages and trains traveling between Rhyolite and Goldfield. Located some eleven miles north of Rhyolite, the water from this site was first used to supply thirsty horses, mules, teamsters and passengers traveling through the area. The site was claimed in succession by several miners and entrepreneurs, who tried to eke out a living by selling water,  travelers providing meals, and forage for animals. There is no indication that these efforts, which lasted intermittently from 1907 to 1909, ever paid off. Sporadic efforts were also made in later years to improve the well site, with no obvious degree of success, and in 1911 two intrepid souls attempted to start a farm garden and alfalfa field. Again, the short life of these operations indicates that they were entirely unsuccessful.

The two brief spurts of real activity which surround the well site came during 1907, when the Las Vegas & Tonopah Railroad’s construction crew made the place a work camp due to its water source, and during 1909, when the owner of the well tried unsuccessfully to improve the water flow in order to pipe it to adjacent mines. These spurts of activity were brief, however, and soon died out. Several short-lived mining companies also briefly tried to develop their claims in the area, but all these efforts died quickly.

Today, the site is littered with debris, but still contains some low stone walls and the ruins of a small beehive furnace. it is located about 11 miles north of Rhyolite alongside the grade of the abandoned Las Vegas & Tonopah Railroad.