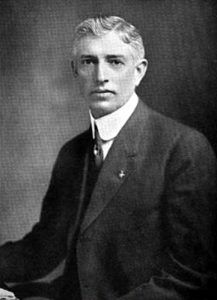 Ernest Alexander “Bob” Montgomery was a capitalist and mine operator who developed several mines in Death Valley, California.

Montgomery was born in Toronto, Canada, on November 24, 1863, the son of Alexander Montgomery and Jane Chapman Montgomery. He received his early education in the public schools of Toronto until the family relocated to a farm in Stuart, Iowa. There, he continued his education.

In 1884, he decided to strike out on his own and made his way to Idaho, where he engaged in mining. However, he met with only meager success there, so then moved to Washington, where he spent some time prospecting. After working in various other sections in the American West, he went to Nevada in 1901, where he helped organize and develop the Montgomery Mining District. Here, his long experience and years of disappointment and hardship were rewarded with success. One of the early properties developed by him in Nevada was the Johnnie Mine, which netted him a small fortune.

Montgomery’s energy next directed him to Inyo County, California, where he developed the World Beater and the O Be Joyful Mines in the Panamint Mining District.

Returning to Nevada in 1903, Montgomery landed at Tonopah, where he was commissioned by the Los Angeles, Daggett, & Tonopah Railway Company to report on the districts which would be tributary to the road. His intimate knowledge of the country enabled him to perform this work in such a manner that he foresaw very closely the tonnage of freight that would accrue to a railroad in that section, and it was upon his judgment, to a great extent, that the promoters of the line began its construction. The original company began the railroad, but they did not complete it; instead, it was taken over by the Las Vegas & Tonopah and Tonopah & Tidewater Railways.

In 1904, he returned to mining and outfitting, prospecting the region surrounding Tonopah, Nevada. In September of that year, he located the once celebrated Shoshone-Montgomery Mine in the Bullfrog District of Nevada, a property which he developed rapidly, and at the end of 16 months made such a remarkable showing that Charles M. Schwab, the steel magnate, and his financial associates, sought to purchase it. The result of the negotiations was the sale of this property, together with the Polaris Mine, a neighboring property which he also owned, to the Montgomery-Shoshone Mines Company, which was organized to take over the holdings. Nevertheless, he retained a large interest in the new company.

After this deal, Montgomery had acquired a comfortable fortune, but he did not relax in his mining activity, and in 1905, after examining various properties, obtained control of the Skidoo Mines, a property located in the Panamint Mountain Range of California, on the edge of the Death Valley. He immediately began working these mines on a scientific and extensive scale, spending a large sum of money in development work, the installation of machinery, erection of a mill, and the construction of a pipeline 20 miles in length, from which a supply of water is furnished sufficient to operate a fifteen-stamp mill. The entire investment represented a capital outlay of about half a million dollars, which equaled its dividends during the few years of operation.

Montgomery was also involved in other mining development, including being one of the first pioneers in the camp of Goldfield, Nevada.

In 1904, he made his permanent headquarters in Los Angeles, California, where he was heavily involved in several mining organizations. Continuing his mining interests, he later developed several new properties in National, Nevada, as well as in Mexico. He also became interested in oil development in Mexico as well as real estate. Traveling the world extensively, he met and married Antoinette Schwarz in New York City in July 1912.

Montgomery continued his mining interests for the rest of his life, dying at Clovis, New Mexico, on August 15, 1955, while developing a new mining operation. He was 91 years old. 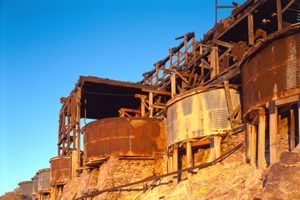 The Boomtown of Skidoo, California