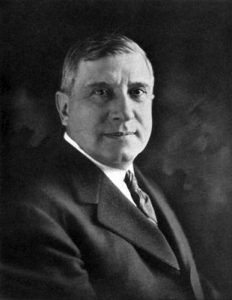 Charles Michael Schwab was an American steel and mining magnate. Under his leadership, Bethlehem Steel became the second-largest steelmaker in the United States and one of the most influential heavy manufacturers in the world.

On February 18, 1862, Charles was born in Williamsburg, Pennsylvania, to John and Pauline Farabaugh Schwab; he grew up to attend Saint Francis College, now Saint Francis University, in Loretto, PA, but left after two years to find work in Pittsburgh. He got a job working in Andrew Carnegie’s steelworks, learned fast, and moved up quickly. At 21, he married Emma Eurania “Rana” Dinkey in May 1883, despite his mother’s disapproval because she was not Catholic.

In 1897, at only 35 years of age, he became president of the Carnegie Steel Company. In 1901, he helped negotiate the secret sale of Carnegie Steel to a group of New York-based financiers led by J.P. Morgan. Schwab then became the first president of the U.S. Steel Corporation. After several clashes with J.P. Morgan and other executives, he left U.S. Steel in 1903 to run the Bethlehem Steel Company in Bethlehem, Pennsylvania, which soon became the largest independent steel producer in the world.

This location, known as the “Upper West Side,” bounded Central Park but was considered by the city’s elite as the “wrong side.” Hoping to develop that side and lure the rich from their east side apartments, Schwab built one of the most ambitious private houses ever built in New York City. Calling his mansion “Riverside,” it was designed by French architect Maurice Hebert in the French Renaissance chateau style. 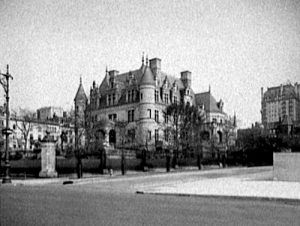 Construction began on the 75 room mansion in 1901 and lasted six years. Set in its own landscaped park, his home included a Roman bath-style swimming pool, a bowling alley, a Grand Court with two levels of balconies on three sides that overlooked the central staircase, and a card room where millionaires gambled with high stakes. The exterior featured a belfry, 116-foot-high pinnacles, a four-car garage, and a service tunnel buried beneath the garden terraces. The initial cost of the building was seven million dollars.

Shortly after the turn of the century, Schwab became interested in the mining industries of Death Valley. In 1905, he invested in the Lee-Echo District of California, and the town of Schwab was named for him. In 1906, he bought several claims in the Greenwater Mining District and opened the Greenwater Death Valley Copper Company. That same year, he bought out Bob Montgomery’s interest in the Montgomery Shoshone Mine in Rhyolite, Nevada for several million dollars. However, Schwab should have stuck to steel, as his investments in Death Valley wouldn’t pay off and the financial panic of 1907 took its toll on the mines that were producing.

But, Schwab had not spent his entire fortune, as in 1919, he built a summer retreat in Loretto, Pennsylvania. At the cost of three million dollars, the 44 room mansion sat on nearly 1,000 acres. Called “Immergrün,” German for “evergreen,” the house featured opulent gardens and a nine-hole golf course.

In the meantime, Schwab lived a lavish lifestyle, hosted opulent parties, participated in high-stakes gambling, and had a string of extramarital affairs, one of which produced a child out of wedlock. This, of course, took its toll on his marriage. He became an international celebrity when he “broke the bank” at Monte Carlo and traveled in a $100,000 private rail car named “Loretto.” But, he was also a philanthropist and a great supporter of the arts. The stock market crash of 1929 took a major toll on his wealth, but by that time, he had already spent the greatest majority of it, having gone through an estimated 25-40 million dollars. Adjusted for inflation, that equates to between $500 million and $800 million in the first decade of the 21st century.

By 1933, he could not pay the property taxes on his Riverside Mansion in New York City. Though he had paid some $7 million to build it, he tried to sell it in 1936 for only $4 million, but there were no takers. After his wife’s death, he lost his Riverside home and moved to a small apartment on Park Avenue. He died on September 19, 1939, from a heart attack at the age of 77. He was buried in Loretto, Pennsylvania, at Saint Michael’s Cemetery in a private mausoleum with his wife. He and his wife never had any children. 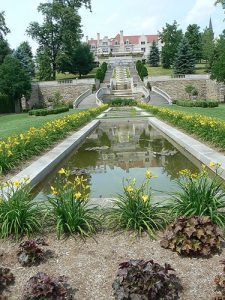 He died with more than $300,000 in debt, and his holdings in Bethlehem Steel were, by that time, virtually worthless. Had he lived a few more years, he would have seen his fortunes restored when Bethlehem Steel was flooded with orders for war material. In the next several years, Schwab’s holdings were sold off. The Immergrun estate in Loretto was sold at an auction in 1942 to the Friends of St. Francis College. The only bidders, they purchased the mansion and  240 acres for $32,500. Today, the mansion house remains part of Saint Francis College, as the Mount Assisi Friary. The New York Riverside Mansion was first offered to New York Mayor Fiorello La Guardia as an official mayoral residence. However, the mayor turned it down, deeming it too grandiose. It then sat vacant until the Prudential Insurance Co. purchased it for $1.5 million in 1947. The mansion was then torn down and replaced by a pair of drab apartment buildings.

Charles M. Schwab was not related to Charles R. Schwab, founder of the Charles Schwab Corporation.