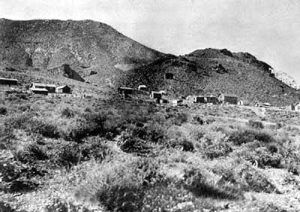 Gold Bar – A small mining camp in the Bullfrog Mining District, it got its start in 1905 at the base of the Gold Bar Mine and the Homestake-King Mine and Mill. Sitting side by side, the mines seemed to do very well for the first several years partly because of their close proximity to the Las Vegas & Tonopah Railroad, making the transportation of ore much less costly. The townsite of Gold Bar eventually supported about 50 people and had a number of substantial buildings. In the end, the Gold Bar Mine turned out to be a swindle, with the only people making any money being the promoters.

However, the Homestake-King Mine was one of the most honestly and wisely run companies of its time. However, by 1908 the recession caused by the Panic of 1907 caught up with Gold Bar, as well as nearby Rhyolite, and operations began to slow down and eventually stop. The Gold Bar Mine closed in 1908 and the Homestake-King, the following year. Most of the buildings were then moved to Rhyolite. In the 1930’s the Homestake-King was purchased and in 1937 was being worked by 14 men. However, it was short lived. It is now part of the Death Valley National Park. There is nothing left of the mining camp, and only a little of the Gold Bar property — a few shafts, adits, and the foundations of the mill site. Of the Homestake-King mine, there are several ruins including shafts, adits, and six very large foundations of the mill. To get to the site, travel west from Bullfrog one mile and take a right at the fork. Continue for another ½ mile and take another right at the fork. follow this road for 3 ½ miles to Gold Bar. 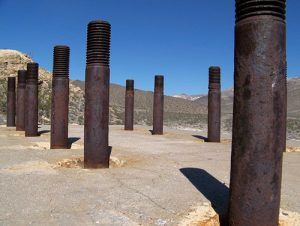 Gold Center – Located in the Bullfrog Mining District near Tonopah, Gold Center was established in December, 1904 and a post office opened the next month. Why it was called Gold Center is a mystery, as there was no gold there. Instead it was a transportation hub and critical water source for Bullfrog,  Rhyolite, and Carrara. The Tonopah & Tidewater Railroad, the Atlantic & Pacific Railroad, and the Union Pacific Railroad all ran through the town. At the time of its peak in 1907, it boasted a hotel, a bank, brokerage firms, a newspaper, a few mercantile stores, numerous saloons, an ice house and two mills. The most imposing building in gold Center was the Gold Center Ice and Brewing Company, the first brewery in the area. When nearby Rhyolite began to decline in late 1908, Gold Center also faded and by 1911, the population was only about 25 people. The railroad tracks were pulled up in 1918. Today, little remains of the town other than the foundations of a stamp mill and brewery, the footers for a tank at the cyanide plant, and sections of the water line that ran between Gold Center and Carrara.

Johnnie – The story of Johnnie begins with the “Lost Breyfogle Mine.”  This tale begins in 1863 when a prospector by the name of Joshua Breyfogle brought a very rich piece of ore into the mining center of Austin, Nevada in 1863. Breyfogle who had been prospecting in Death Valley, had gotten lost after fleeing an Indian attack. Much later, his memories fuzzy, he began to search for the rich quartz ledge, but, though he searched for 26 years, he died before ever finding it. In 1891, while brothers, George and Bob Montgomery, were searching for the Lost Breyfogle Mine, they hired a Paiute Indian named “Indian Johnnie” as a guide. Steering them to a rich site of gold, the brothers believed it to be the Lost Breyfogle. 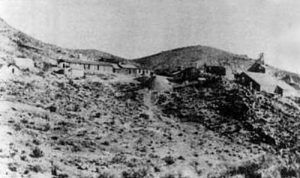 The camp that grew up around the mine was first known as Montgomery, but the mine was known as the Johnnie Mine, after the Indian that had guided the brothers to the discovery. Soon the camp was also called Johnnie and supported about 100 people. The Johnnie mine site was a few miles northeast of the townsite. Also supporting the camp was the Congress Mine, sometimes called the Chispa Mine, which was located just west of the townsite. A post office was opened in August, 1891. A few years later; however, only the Congress Mine was active and the post office closed in March, 1894. When a  new mill was built for the Congress Mine in September, 1895, it employed 70 men and revived the camp briefly before it emptied out. The Congress Mine was sold in 1898 and about 50 men were back. But, due to unresolved labor disputes, the operations were quickly shut down again.

Still, it was not the end for Johnnie. When several new discoveries were made in 1905, the Congress Mine was again reopened and a number of new claims were staked. Just two years later, the camp boasted a population of about 350 people, several stores, saloons, hotels and restaurants. By 1914 the boom was over and the population dropped to less than 15 people. Just two years later, another discovery started Johnnie up again. The Eureka Johnnie Gold Mining Company began operations in 1921 and continued until 1925.

But, Johnnie didn’t die. There was still enough gold in the area for prospectors to keep working. However, the post office closed in November, 1935 an soon everyone was gone.  Over the next several years, the site changed hands several times. Though there are numerous remains at the site, including a few wood cabins, it is on private property and visitors are not allowed. It is located about 16 miles north of Pahrump on the west side of NV-160.

Leeland – Another station on the Tonopah & Tidewater Railroad, it was established in 1906. It soon became the railhead for nearby mining camps including Lee, California/Nevada. In 1911 a post office was established, which lasted until 1914. The tracks were removed in the early 1940’s. Located about 17 miles south of Beatty, Nevada, there is little left but the foundations of the water tank and other railroad debris. 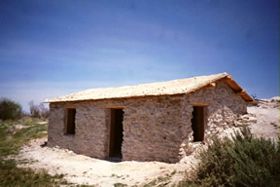 Longstreet Cabin – This historic cabin was originally built in 1895 by Jack Longstreet who settled in the Ash Meadows area. He lived in the cabin for several years before selling the property in 1906. Longstreet epitomized the mythical Western frontiersman: self-reliant, strong-willed, and fair-minded. He was at various times said to have been a feared gunman,  friend of the Indians, a farmer, a miner and a saloon keeper. The Longstreet Cabin was rebuilt by the U.S. Fish and Wildlife Service in exactly the same location, with the stones from the original building. It is located in the Ash Meadows National Wildlife Refuge in Amargosa Valley, Nevada.

Manse Ranch – Also known as Yount’s Ranch, this place was first settled by Joseph Yount and his family in the 1870’s. Located near Manse Springs, it soon became a stopping place for prospectors and travelers moving between Las Vegas and the mining camps to the west. By the 1890 the Yount family had built their home into an Oasis which included  a large house as well as storerooms, corrals, stables, and barns. As others settled in the area, a post office was opened at the ranch in 1891 and stagecoaches running from Ivanpah to Bullfrog made regular stops there.  In 1905, the Las Vegas Age wrote of the ranch: “Manse has become a resort for travelers, where water, feed, shade, rest and table luxuries abound … watered by the springs and ditches, willows, cottonwood, poplars, and other shade trees have grown to maturity. Around the old ranch home are clustered umbrella trees, apples, walnuts, peaches, pears, plums and the smaller fruits and vegetables in abundance.” The population of the area was about 50 in 1911. Though the post office closed in 1914, the ranch continued to operate. Today, it still operates as a ranch and a dairy farm. It is located near Pahrump, Nevada.