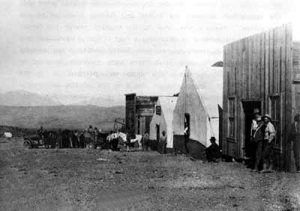 Arthur Kunze, the founder of the original Greenwater site in California, was a prospector who was more interested in copper than gold.

After tramping over the Nevada desert, he came into the Funeral Range, stopping at Bullfrog, Nevada, just long enough to secure provisions. Following the trail of other prospectors, he staked out several claims in the Greenwater District of Death Valley. Later, he returned to Tonopah, Nevada, where he displayed rich copper ores to several investors, hoping to sell his claims. In July, Kunze was successful, selling 16 claims to Charles Schwab for $180,000. Along with other investors, formed the Greenwater Death Valley Copper Company in August, with a capitalization of $3,000,000, one of the largest in the Greenwater District.

With the organization of the company, the rush to the Greenwater District was on. Kunze founded the original site of Greenwater, which was also referred to as Kunze. However, it was consolidated with the nearby townsite of Ramsey in late 1906 and officially called Greenwater. The district bloomed briefly as a potential copper mining area from 1905-1908. But, despite millions in investments and a major boom in the district, bringing the population to some 2,000 people, no rich ores were ever found. The three townsites that made up the district – Kunze, Ramsey, and Furnace, which all later became Greenwater, were abandoned by the summer of 1908.

Arthur Kunze was one of the last to leave, allegedly broke, and giving his last possession to the driver who took him away from the once-promising district.