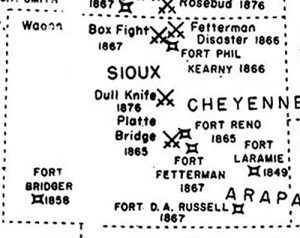 As more and more emigrants began to pass through Wyoming on their way west, the Native Americans who called the region home or used it as hunting grounds, began to resent the traffic through their lands, especially after the California Gold Rush. As a result, the U.S. government began to negotiate with the Plains tribes living between the Arkansas and Missouri Rivers to ensure a protected right-of-way for the many travelers. To accomplish this the Fort Laramie Treaty of 1851 was signed with representatives of the Cheyenne Sioux, Arapaho, Crow, Assiniboine, Mandan, Hidatsa, and Arikara nations on September 17, 1851. The treaty set forth the Indians’ traditional territorial claims, guaranteed safe passage for settlers, and allowed the government to build forts and roads across the territories. In return, the government was to provide annuities of $50,000 for fifty years to the tribes. Later, the U.S. Senate ratified the treaty, adding Article 5, which adjusted the compensation from fifty to ten years, if the tribes accepted the changes. All tribes accepted the change with the exception of the Crow.

The treaty produced a brief period of peace; but, as several tribes did not receive the commodities promised as payments and the government chose not to enforce the treaty to keep out the emigrants, especially during the Pike’s Peak Gold Rush of 1858, the tribes began to retaliate. As attacks began on settlers intruding upon their lands, the military presence along the trails was increased and a number of forts were established. When the Bozeman Trail was blazed in 1864, yet more emigrants intruded on Indian lands resulting in more attacks. As a result, Major General Grenville M. Dodge ordered the first Powder River Expedition to attempt to quell the violence in 1865. The expedition ended in a battle against the Arapaho in the Battle of Tongue River. However, the fighting escalated again the very next year in what has become known as Red Cloud’s War which was the first major military conflict between the United States and the Wyoming Indian tribes. The second Treaty of Fort Laramie in 1868 ended the war by closing the Powder River Country to white settlers.

A number of skirmishes, battles, and massacres occurred during these turbulent years. Fort Phil Kearny saw some of the most dramatic incidents such as the Wagon Box Fight and the Fetterman Massacre.